MDC leader Nelson Chamisa misses President Emmerson Mnangagwa with whom he was used to sparring in the National Assembly, the youthful politician said Wednesday.

Chamisa was addressing friends and family of missing journalist-cum-political activist Itai Dzamara t the launch of a trust in the latter’s honour in Harare, on Thursday.

“I miss our parliamentary practice especially. I miss my brother Emmerson Mnangagwa when he was on the other side, how I would pour political depth and how he would fail to defend blow to blow.

“I hope to do the same, this time in a different stadium of our politics,” said Chamisa.

“Linda Masarira, also a president (LEAD) in her own right, I really miss her. I want her to come back to the big family and I hope she will come back. A very courageous woman,” said Chamisa.

The Kuwadzana East MP Chamisa and Mnangagwa at the time Justice Minister before he was elevated to the position of Vice President used to tease each other in Parliament.

At one time Mnangagwa dismissed his submissions as being those of an immature young man before Chamisa laid into Mugabe, also blaming advanced age for what he said were poor governance skills.

Chamisa and Mnangagwa have not met since then. Everything changed with the November 15, 2017 military coup and the death of founding MDC leader Morgan Tsvangirai last February.

Mnangagwa who two weeks earlier had been sacked as the country’s number two, returned to take power on the back of the military coup before Chamisa pulled the rug from under the feet of his rivals hours after Tsvangirai was pronounced dead of colon cancer on Valentines’ Day in South Africa last year.

The two would lock horns as presidential candidates in the 2018 polls won controversially by the Zanu PF leader. Chamisa has refused to recognise Mnangagwa as legitimate leader of Zimbabwe despite losing a court petition to overturn the election result.

The MDC leader has however demanded talks with Mnangagwa but refused to refused to join a political actors platform convened by the President that includes all losing candidates to last year’s elections.

Masarira is an ardent critic of the MDC leader whom she fell out of favour with before last year’s elections.

The launch of the trust fell on what would have been Dzamara’s 40th birthday and Chamisa in a touching moment called up the missing activist’s wife Sheffra, and their two children Nokutenda and Nenyasha who sang a moving rendition of ‘Happy Birthday Daddy’. 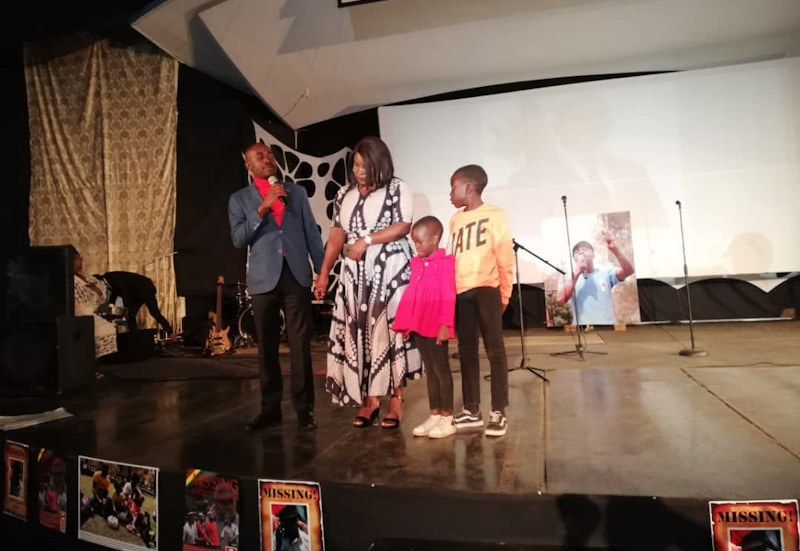 Chamisa and Dzamara’s family at the launch of the trust

Exiled former Information Minister Jonathan Moyo once told BBC’s HardTalk that Dzamara could have skipped the border into South Africa while police and the Central Intelligence Organisation (CIO) have not shared any hint that the matter is being investigated.

Dzamara was seized by suspected State security agents from close to his Glen View 7 home in Harare on 5 March 2015. He has not been heard from ever since. He had staged numerous one man demonstrations demanding then President Robert Mugabe resigns or address the country’s economic crisis. – Newzimbabwe