WASHINGTON (AP) — President Donald Trump on Tuesday turned up the pressure on governors to quell the violence set off by the death of George Floyd, demanding New York call up the National Guard to stop the “lowlifes and losers.”

As cities around the U.S. witnessed a seventh straight night of both peaceful demonstrations and bursts of theft, vandalism and attacks on police, the president amplified his hard-line calls of a day earlier, in which he threatened to send in the military to restore order if governors didn’t do it.

“NYC, CALL UP THE NATIONAL GUARD,” he tweeted. “The lowlifes and losers are ripping you apart. Act fast! Don’t make the same horrible and deadly mistake you made with the Nursing Homes!!!”

In New York on Monday night, people smashed shop windows near Rockefeller Center and breached the doors of Macy’s flagship store on 34th Street despite the first curfew in the city in decades. Police said nearly 700 people were arrested and several officers injured in the overnight violence.

New York and other cities braced for more trouble after nightfall Tuesday, with Mayor Bill de Blasio extending an 8 p.m. curfew all week.

“We’re going to have a tough few days,” he warned, but added: “We’re going to beat it back.” He said he would do that with the help of community leaders, urging them to step forward: “Create peace. … Stand up.”

More than 20,000 National Guard members have been called up in 29 states to deal with the violence. New York is not among them. De Blasio has said he does not want the Guard, and Democratic Gov. Andrew Cuomo has said he will not send it into the city against the mayor’s wishes. 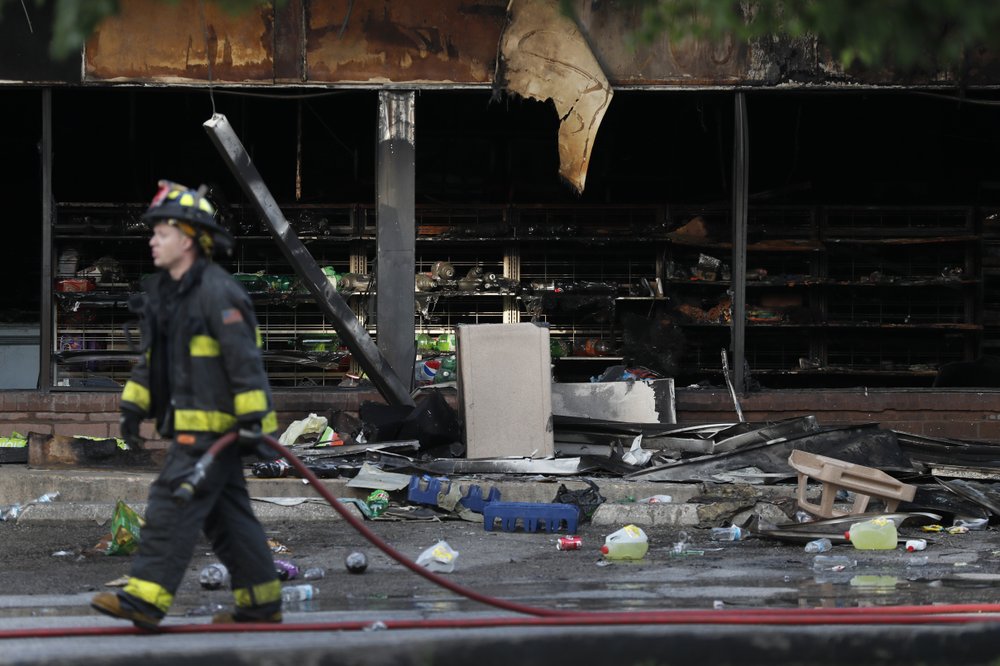 During the violence that gripped communities from coast to coast again on Monday night, police officers were shot, run over and showered with rocks and bottles.

In Philadelphia, where hundreds of protesters spilled onto a highway in the heart of the city, Mayor Jim Kenney described a chaotic night in which one person was killed attempting to use explosives to open an ATM, a gun shop owner fatally shot a would-be thief, and a 19-year-old died of injuries during looting.

About a dozen other deaths have been reported around the country over the past week.

In Atlanta, police fired tear gas at demonstrators. In Nashville, more than 60 National Guard members put down their riot shields at the request of peaceful protesters. And at a demonstration in Buffalo, New York, an SUV plowed into a group of officers, injuring three.

An officer was shot and gravely wounded as police tried to disperse a crowd outside a Las Vegas hotel and casino. Four officers were shot in St. Louis; they were expected to recover.

“We have been sitting on a powder keg for some time and it has burst,” Philadelphia Police Commissioner Danielle Outlaw said.

Some protesters framed the burgeoning movement as a necessity after a string of killings by police.

“I fear for my safety every time I get in the car to go for a drive. I fear of getting pulled over. I fear for all 10 of my brothers’ and sisters’ lives, for my parents’ lives!” 19-year-old Amari Burroughs of Parkland, Florida, said Tuesday as she prepared for another protest. “My goal is to use my voice and my leadership to make this world safer so that one day I can bring children here and won’t have to fear for their safety.” 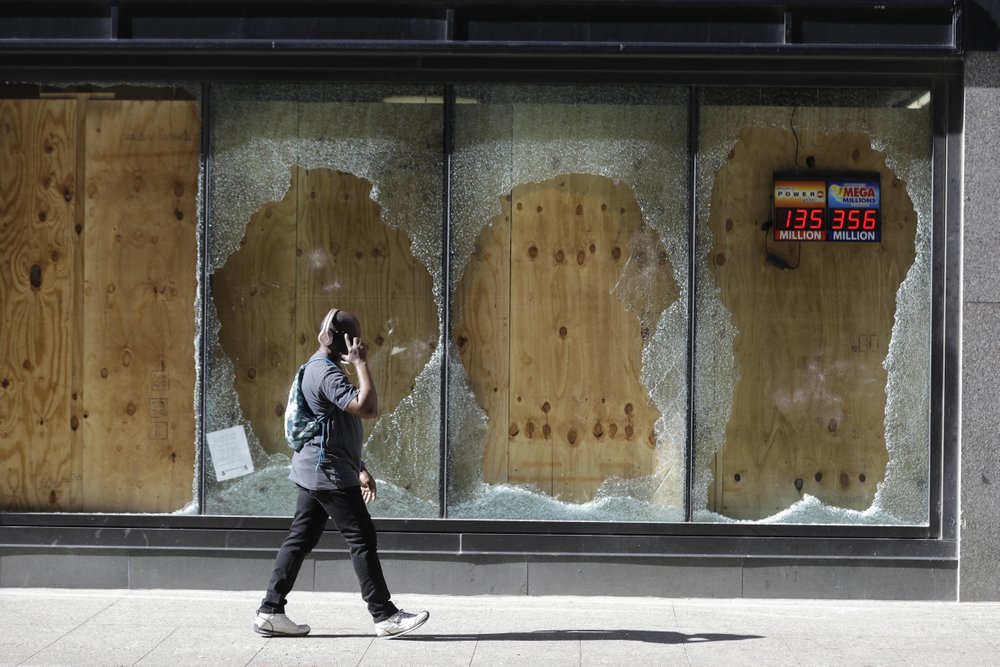 More than 5,600 people nationwide have been arrested over the past week for such offenses as stealing, blocking highways and breaking curfew, according to a count by The Associated Press.

Democratic governors and mayors rejected Trump’s threat to send in the military, questioning whether the federal government has such authority and warning that such a step would be incendiary.

“Denver is not Little Rock in 1957, and Donald Trump is not President Eisenhower. This is a time for healing, for bringing people together, and the best way to protect civil rights is to move away from escalating violence,” they said in a statement. 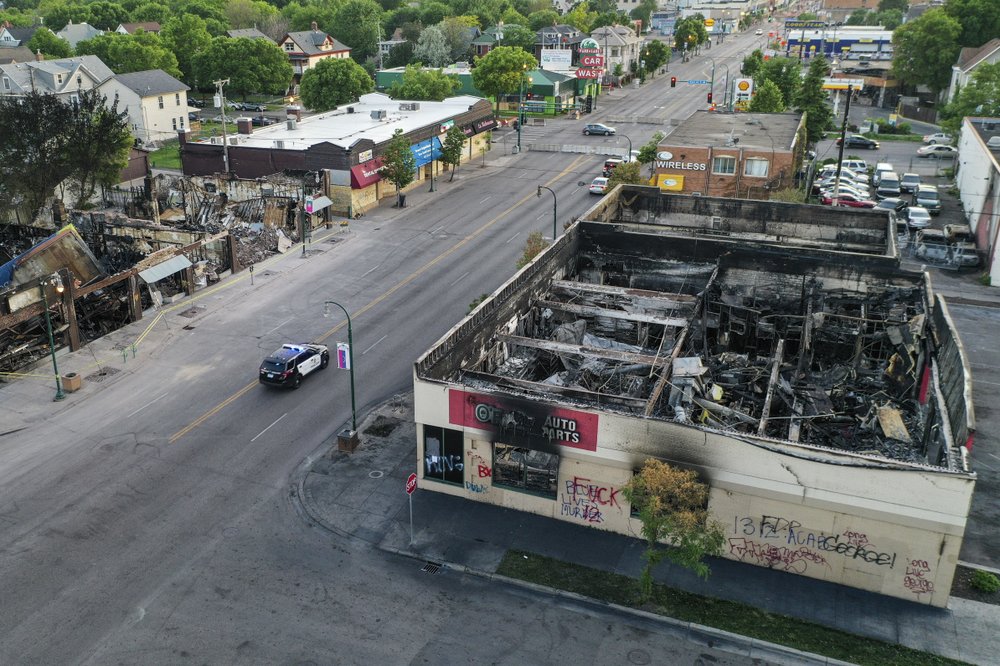 A senior White House official said Tuesday that despite Trump’s threats, the goal was to pressure governors to deploy more National Guard members. The president is not rushing to use the Insurrection Act to send in the military, according to the official, who spoke on condition of anonymity.

The unrest in Minneapolis, meanwhile, appeared to stabilize on the same day Floyd’s brother made an impassioned plea for peace at the spot where a white police officer, Derek Chauvin, put his knee on the handcuffed black man’s neck for several minutes, even after he stopped moving and pleading for air.

Chauvin has been charged with murder. Minnesota Attorney General Keith Ellison said Tuesday that prosecutors were working as fast as they can to determine if the three other officers at the scene should be charged too. All four have been fired.

Floyd’s family was expected to join a march in Houston on Tuesday.

Cities struggled to keep police in line and avoid instances of excessive force.

The police chief in Louisville, Kentucky, was fired after a restaurant owner was killed by police and National Guard members enforcing a curfew. In Richmond, Virginia, the police chief said officers who used tear gas on a group of peaceful protesters would be disciplined. In Atlanta, six officers were charged Tuesday after a video showed authorities dragging two young people from a car during protests.

Sending the military into the states would mark a stunning federal intervention rarely seen in modern American history. It drew comparisons to 1968, when Richard Nixon ran as the law-and-order candidate in the aftermath of riots following the assassination of the Rev. Martin Luther King Jr.

Federal law allows presidents to dispatch the military into states to suppress an insurrection or if a state is defying federal law, legal experts said. But some state officials asserted that the president does not have a unilateral right to send in troops against the will of local governments.