Police said there was no indication of a terrorism motive as they hunted unsuccessfully for the operators of the drones that first appeared on Wednesday night.

With flights grounded for more than 17 hours, the army was called in to help with unspecified “specialist equipment”.

The airport said flights would remain cancelled until further notice on Thursday, a day when 115,000 people were scheduled to pass through, many en route to seasonal breaks.

“I’m very annoyed because I’m with two kids, a three-month-old and three-year-old,” said passenger Ani Kochiashvili who was bound for Georgia but spent six hours overnight sitting on a plane with her children.

“They require a lot of space and food and changing and all that, and the airport is crazy busy so it’s challenging,” she told Reuters by phone among thousands camped in the terminal.

Flights were halted at 2103 GMT on Wednesday after two drones were spotted near the airfield, triggering the biggest disruption at Gatwick since a volcanic ash cloud in 2010.

Prime Minister Theresa May offered sympathies to upset travellers and said police may be given greater powers against drones in the future. Her spokesman condemned the drone flying as “irresponsible and completely unacceptable”.

The airport and its biggest airline easyJet told passengers to check before heading to the airport where people sat waiting on stairs and floors.

Police said more than 20 units were hunting the operators, and drones were still being spotted, according to Gatwick, 50 km (30 miles) south of London.

With an upsurge of public enthusiasm for drones, there has been an increase in near-collisions by unmanned aircraft and commercial jets in recent years.

The number of near misses between private drones and aircraft in Britain more than tripled between 2015 and 2017, with 92 incidents recorded last year, according to the U.K. Airprox Board regulator.

Gatwick’s Woodroofe described one of the drones as a heavy industrial model.

“The police advice is that it would be dangerous to seek to shoot the drone down because of what may happen to the stray bullets,” he told BBC radio.

Drone expert Peter Lee, of Portsmouth University, said he and others had been anticipating disruption.

“An airport would be a preferred or obvious target for somebody who wants to either just create mischief or criminal damage,” he said. “One of my concerns about today is that it may well encourage copy-cat incidents because you can achieve a high amount of disruption for a very, very low cost.”

It is illegal to fly drones within 1 km (0.62 mile) of a British airport boundary, punishable by five years in prison.

Even after Gatwick re-opens, the backlog and disruption are expected to last for days.

Gatwick said that it was working with its airlines, the biggest of which also include British Airways and Norwegian, on recovery plans once the runway re-opens.

It apologised on Twitter here to passengers, adding that safety was its “foremost priority”. 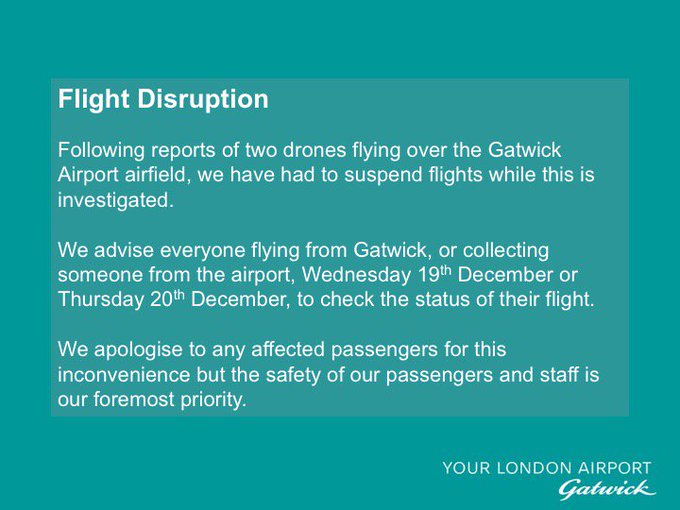 143 people are talking about this

Gatwick, which competes with Europe’s busiest airport Heathrow, west of London, had previously said Sunday would be its busiest day of the festive period.