ROSTOV-ON-DON – Brazil’s bid for a sixth World Cup got off to a slow start as Switzerland withstood an early onslaught to snatch a 1-1 draw in Rostov-on-Don on Sunday.

On the day when holders Germany were shocked 1-0 by Mexico, Brazil’s tag as pre-tournament favourites looked justified in a dominant first half, capped by Philippe Coutinho’s wonder strike to open the scoring.

However, Brazil paid for their failure to kill the game off when Steven Zuber powered home an equaliser from Xherdan Shaqiri’s corner five minutes after the break.

The pressure will now be on Brazil to kickstart their campaign when they face Costa Rica on Friday.

Earlier, Serbia beat Los Ticos 1-0 to move to the top of Group F.

Coutinho had been handed a central role behind Neymar, on his first competitive game for four months, Gabriel Jesus and Willian in a line-up filled with attacking intent from coach Tite.

The five-time world champions went about their task of erasing the memories of a 7-1 thrashing by Germany on home soil four years ago purposefully early on.

So, this is how Group E is looking after today’s fixtures… 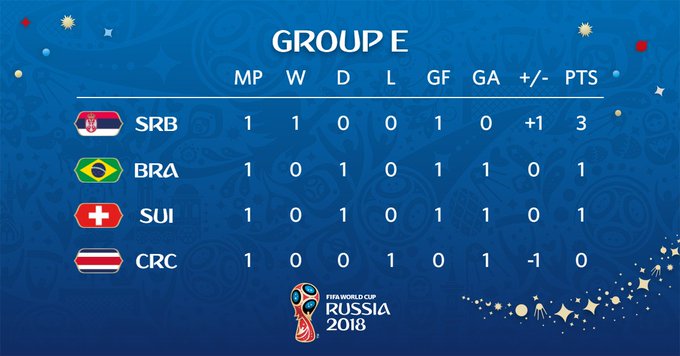 Paulinho passed up a glorious chance when his scuffed effort from close range was turned behind by Yann Sommer.

It seemed a matter of time before Brazil’s pressure paid dividends, and the opener arrived in stunning style on 20 minutes.

Barcelona’s record signing picked up a loose ball on the edge of the area and in trademark fashion, bent the ball crashing in off Sommer’s far-post.

GOLAZOOO!!! PHILIPPE COUTINHO! WHAT A GOAL! WHAT A STRIKE! pic.twitter.com/AN4zIzJucY

Neymar looked bright despite his lack of match practice as he teased the Swiss defence provoking yellow cards for Stephan Lichtsteiner, Fabian Schar and Valon Behrami.

However, Brazil failed to build on their lead as Thiago Silva and Jesus headed off target from dangerous corners and were made to pay early in the second half.

Switzerland had offered barely any attacking threat before levelling when Zuber took advantage of a gaping hole in the heart of the Brazilian defence to head home Shaqiri’s corner.

Forced back on to the front foot, Brazil turned to Neymar for a moment of inspiration, but he could only blast into the side-netting, before Coutinho sliced wide with a much simpler opportunity than the one from which he opened the scoring. 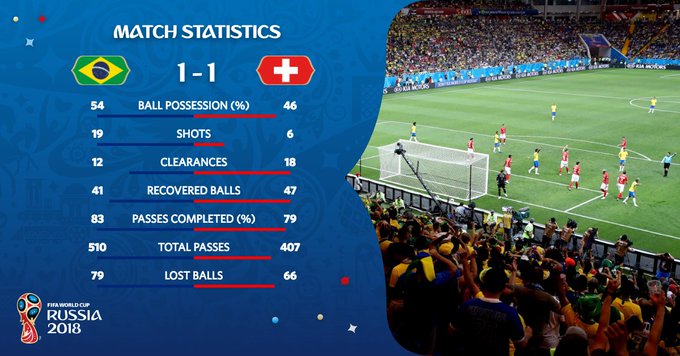 Brazil were unhappy that Zuber wasn’t penalised for a slight push on Miranda for the equaliser, and felt hard done by again when Jesus tumbled under a challenge from Manuel Akanji inside the area, with Mexican referee Cesar Ramos unmoved.

Tite’s men ended as they had begun with a series of chances for a late winner as Neymar and Roberto Firmino headed straight at Sommer, before Miranda dragged a shot inches wide.

And deep into stoppage time, Schar’s outstretched leg turned a goal-bound effort from Silva wide as Switzerland held out for a vital point.