MOSCOW – Defending champions Germany crashed to the first defeat in their opening game of a World Cup since 1982 as Hirving Lozano’s clinical finish earned Mexico a shock 1-0 victory on Sunday.

The highly-rated PSV Eindhoven forward struck the winner on 35 minutes after a blistering counter-attack at the Luzhniki Stadium in Moscow as Mexico beat Germany for just the second time in history.

Germany’s preparations for the tournament were plagued by poor results and controversy, and their problems were magnified in the Russian capital, leaving their proud record of never being eliminated in the group stage of a World Cup already in danger.

And if they finish runners-up to the Mexicans, Germany could be on course to face Brazil in a daunting second-round match-up.

“I don’t know if it’s the biggest win in (Mexico’s) history, but doubtless it is one of the biggest for sure,” Lozano said. “It’s great to start on the right foot when you’re playing against the world champions.

“I think it’s definitely the best goal I’ve ever scored in my life, we all dream of playing in the World Cup.”

Loew started eight of the nine 2014 World Cup winners in his squad, with Mesut Ozil returning from a knee injury and Manuel Neuer back in goal following his lengthy absence for the Group F clash. 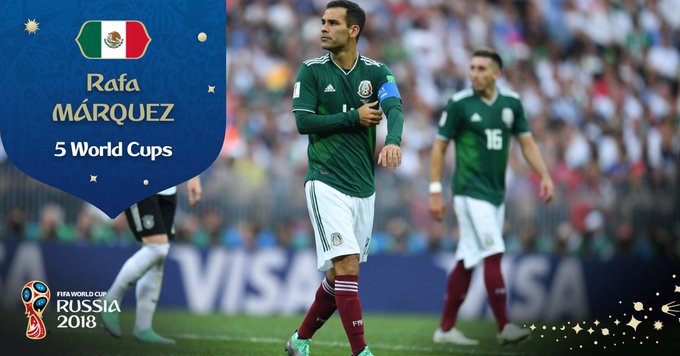 A historic day for @RafaMarquezMX

Jerome Boateng’s build-up to the finals was also hampered by a groin injury, but the Bayern Munich centre-back was on the alert inside 60 seconds to thrust himself desperately in front of a Lozano effort.

A remarkably open start saw Timo Werner sprint in behind the Mexico defence before dragging across the face of goal, while Mats Hummels shot straight at Guillermo Ochoa after a botched clearance.

Neuer held well twice in quick succession, first from a long-range Hector Herrera strike and then again to keep out Hector Moreno’s header, as Mexico attacked the Germany backline with regularity.

Carlos Salcedo nearly diverted a teasing cross into his own net, while Timo Werner hit tamely at Ochoa when an umarked Julian Draxler appeared the better option.

Mexico continued to threaten, Miguel Layun narrowly unable to latch onto a through ball, but their goal arrived 10 minutes before the break as Germany were again sliced apart.

After Sami Khedira lost possession, Javier Hernandez triggered a lightning counter before finding a charging Lozano, who cut inside a covering Ozil and lashed low inside Neuer’s near post to spark deafening roars from the sizeable Mexico support. 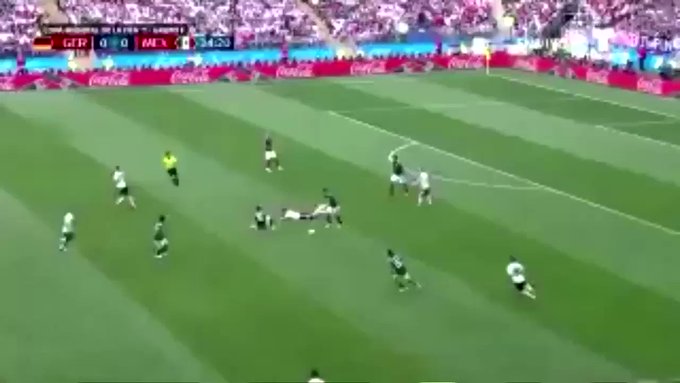 Here is the Goal by #22 from Mexico Lozano

Germany hit back, Toni Kroos rattling the crossbar with a 25-yard free kick that needed the fingertips of a scrambling Ochoa to keep it out, but Mexico barely clung on to their advantage.

Marco Reus was introduced on the hour as Loew sought to invigorate a struggling side, while 39-year-old Rafael Marquez became just the third player to feature at five World Cups as he was brought on the tighten Mexico’s defence.

Joshua Kimmich’s acrobatic overhead kick looped on to the roof of the net, with substitute Edson Alvarez then blocking bravely to thwart Draxler.

How are you feeling, #MEX fans? #WorldCup pic.twitter.com/Qzkh0G5wtZ 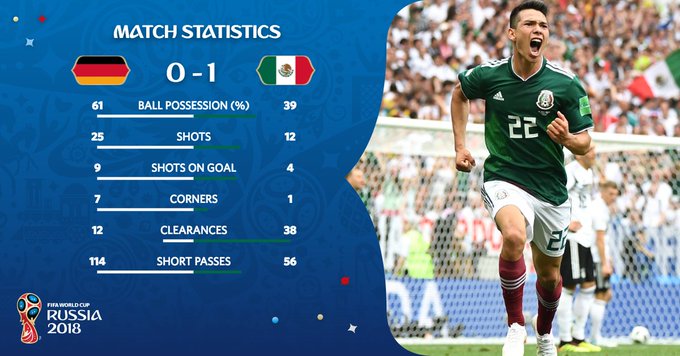 Reus also hammered a volley over from a narrow angle before a frenetic finale saw Julian Brandt, just on for Werner, smack the outside of the post with a thunderous effort from 20 yards.

One desperate last attack had Neuer come up for a corner, but a towering header from the veteran Marquez and subsequent claim from Ochoa allowed Mexico to close out an unforgettable triumph.