HARARE – Former Botswana President Ian Seretse Khama and South Africa’s former Public Protector Thuli Madonsela are among some of the names being considered to mediate talks between President Emmerson Mnangagwa and his opposition rivals, ZimLive has learnt.

The shortlist of suggested dialogue conveners includes the United Nations as well as Prophet Emmanuel Makandiwa of the United Family International Ministries.

There has been no agreement on the nominees, however, and leaders of political parties participating in the dialogue are expected to meet and come to an agreement.

The nominations were made by 16 political parties that accepted Mnangagwa’s invitation to a political dialogue, which he hopes will ease political tensions and create support for his economic revival plan which so far appears dead on delivery owing to western sanctions on the country, and international goodwill that evaporated after the Zanu PF leader ordered a post-election military crackdown on opposition supporters last July and fuel protests in January this year.

A document seen by ZimLive reveals that five of the 16 participating parties, which exclude the main opposition Movement for Democratic Change (MDC) led by Nelson Chamisa; Joice Mujuru’s National People’s Party; Nkosana Moyo’s Alliance for the People’s Agenda and Noah Manyika’s Build Zimbabwe Alliance who are boycotting the dialogue, voted to have the process jointly mediated by the National Peace and Reconciliation Commission (NPRC) and the Zimbabwe Gender Commission (ZGC). 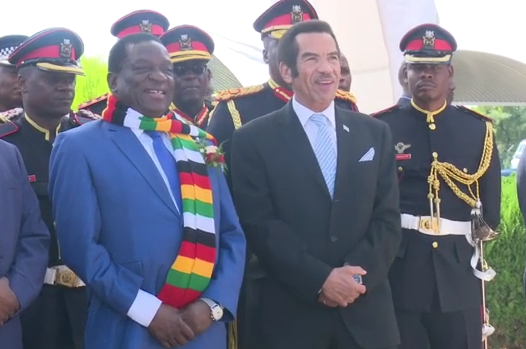 Makandiwa got the nod from two parties while Khama, Madonsela and the United Nations were supported by one party each.

A thematic committee of the political parties established to identify a mediator failed to reach consensus, and has advised Mnangagwa to “urgently convene a high-level meeting of political party leaders to resolve this impasse through consensus,” the document says.

Some of the qualities of the successful candidate, the committee said, must include “impartiality; trustworthiness; ability to influence; knowledgeability; access to high level authorities; ability to shape public opinion; integrity/reputation; and a capacity to mobilize resources.”

The boycotting parties led by the MDC have refused to participate in the dialogue so far, insisting that it should be convened by an impartial third party, with whose work must be underpinned by the African Union and the United Nations.

Meanwhile, another thematic committee proposed the establishment of a consultative template similar to the one which was used during the outreach programme in the drafting of a new constitution adopted in 2013. The process is to be called the “Political Actors Dialogue” or “POLAD”.

The parties also envisage the establishment of a coordinating committee made up of two senior members of each party. The committee will “plan and manage the holding of national dialogue sessions for political parties.”

There will also be a POLAD information and publicity.

“The general view was that the dialogue should be funded primarily by government, with supplementary financial support possibly being mobilised from external co-operating partners,” the thematic committee on “institutional framework” chaired by Patience Chiradza from the National Peace and Reconciliation Commission (NPRC) said.

It was proposed that the institution to house POLAD and act as the custodian of funding throughout the entire dialogue process should be the NPRC.

Dialogue meetings will move from State House to all provinces, and will be held quarterly, the parties said.

It remains unclear if Mnangagwa’s cash-strapped government will be able to marshal the resources needed to finance POLAD, whose programme appears open-ended and could run into millions of dollars. – ZimLive