POLICE in Bulawayo have taken into their custody, the sister of journalist Mduduzi Mathuthu after failing to locate the scribe at his home.

According to a police search warrant, Mathuthu is wanted in connection with suspected possession of subversive material for use in Friday’s anti-government protests.

Mathuthu confirmed the arrest of his sister.

“So they raided my house, found me absent and they gave my sister an ultimatum: get Mduduzi here, or we will take you. They took her. She has no journalistic or political bone on her. Please stop this madness,” the former Chronicle editor tweeted Thursday evening.

Police had obtained a search and seizure warrant at the magistrates’ court granting them permission to look for subversive material they suspected was in the journalist’s possession.

According to the warrant, Mathuthu is organising and advocating for illegal 31 July demonstrations against the government.

“He is believed to be communicating with Zimbabweans through his cellular phone(s) and other various means, intending by the communication, to persuade or induce Zimbabweans to engage in public violence,” the warrant reads.

“Furthermore, he is believed to be manufacturing, storing and distributing to members of the public, some materials for use during the illegal demonstration on 31 July.”

Two weeks ago police arrested freelance journalist Hopewell Chin’ono on charges of inciting public violence ahead of this Friday’s demonstrations. Chin’ono is in remand prison after he was denied bail. 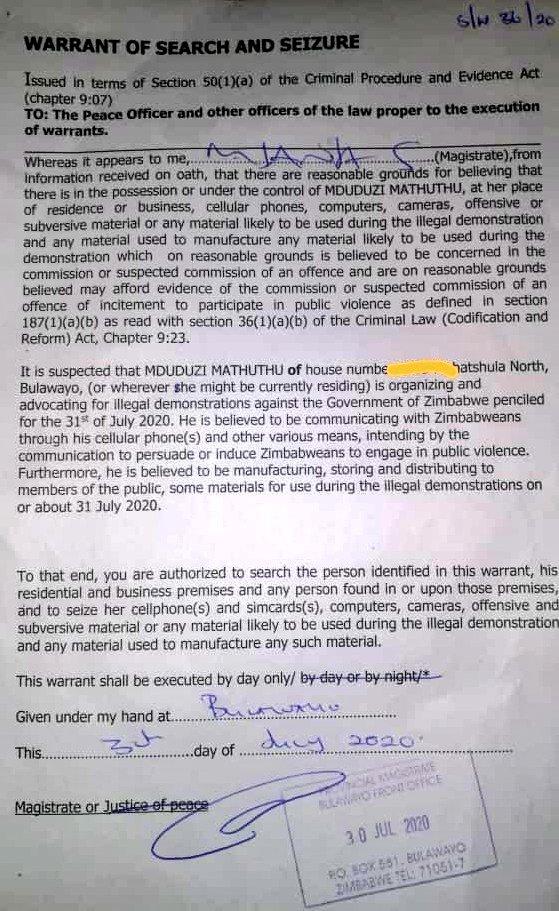