Tina Turner experienced her “saddest moment as a mother” as she scattered her late son’s ashes.

The ‘It’s Only Love’ hitmaker bid her eldest child, Craig Raymond Turner, who was 59 when he took his own life earlier this month, a final farewell with family and loved ones as she spread his ashes into the sea off the Californian coast last Friday.

Alongside a photo of her throwing a rose into the ocean from a boat whilst being held by her husband Erwin Bach, the music legend – who also has Ronnie Turner, 57, with late ex-husband Ike Turner – wrote on Twitter: “My saddest moment as a mother. On Thursday, July 19 2018, I said my final goodbye to my son, Craig Raymond Turner, when I gathered with family and friends to scatter his ashes off the coast of California. He was fifty-nine when he died so tragically, but he will always be my baby [sic]” 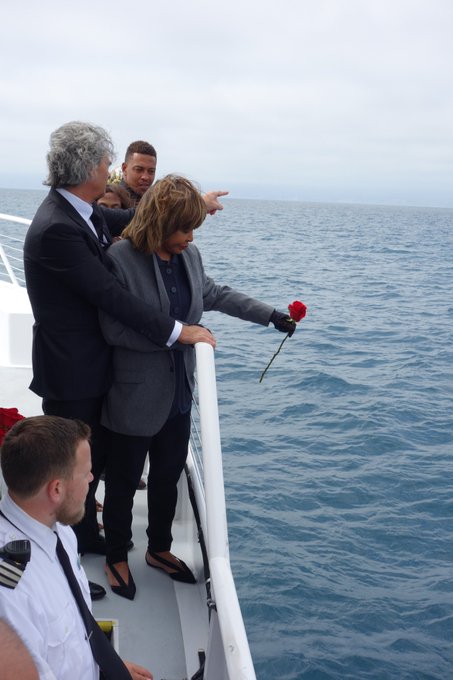 My saddest moment as a mother. On Thursday, July 19 2018, I said my final goodbye to my son, Craig Raymond Turner, when I gathered with family and friends to scatter his ashes off the coast of California. He was fifty-nine when he died so tragically, but he will always be my baby

Craig passed away from a self-inflicted gunshot wound at his home in Studio City, California.

The ‘Proud Mary’ singer’s son was found at his home just after midday on July 3, and was pronounced dead at the scene.

Tina was 18 when she had Craig with a saxophonist named Raymond Hill. When Tina married Ike in 1962, he adopted her son as his own.

Craig’s sad passing came just a few months after Tina – who has been married to Erwin since 2013 – admitted she had “forgiven” her first husband for his past violent outbursts.

The 78-year-old singer no longer bears a grudge against her former spouse – who passed away in 2007 – despite her claims he abused her and controlled her life until they split in 1976.

She said: “As an old person, I have forgiven him, but I would not work with him. He asked for one more tour with me, and I said, ‘No, absolutely not.’ Ike wasn’t someone you could forgive and allow him back in. It’s all gone, all forgotten. I don’t know what the dreams are about. The dreams are still there – not the violence, the anger. I wonder if I’m still holding something in … I felt awful. I didn’t know how to say no, because I needed the work. I think I wasn’t educated to handle that.”

Tina had claimed Ike was violent towards her because he was afraid she would leave him.

She added: “There was violence, because he had this fear that I was going to leave him. The other women, because I didn’t love him that way … the other women weren’t so bad, but it was the constant, constant ill treatment.”