ARMED police and army officers in Bulawayo Tuesday launched a surprise early morning massive crackdown on civilians who were in town intending to conduct various business activities, bringing the entire central business district to a standstill.

As early as 5 am, State security agents were seen patrolling the city’s streets chasing away workers, motorists, and people queuing for various services such as in banks, fuel stations, and vegetable markets.

Civil servants started receiving their June salaries and were the majority of the people queuing to access cash and were the most affected.

“I finished work at around 4:30 am this morning and decided to queue for cash at my bank along Leopold Takawira Street,” a security guard said.

“A few minutes after, I saw a group of soldiers menacingly coming towards the bank. They ordered everyone to leave the place and go home.”

The security guard said the soldiers did not explain why they were clearing people from town when Zimbabwe has now relaxed its Covid-19 regulations.

Roadblocks were mounted on all major roads leading into the city with motorists and passengers being sent back home.

“I boarded a ZUPCO bus around 6 am intending to go to work. When we reached a police roadblock along Luveve Road all the passengers except the uniformed forces, security guards, and nurses were allowed to proceed into town. I tried to produce my authorisation letter but they told me off,” said a shop attendant at one of the leading supermarkets.

More sights and sounds of soldiers and police acting funny in Bulawayo this morning. Some occult seems to be in panic mode, since going public with weird coup rumours. Someone else seems to be poking the panic, to expose it. The result is confusion in the streets!#ZanupfMustGo 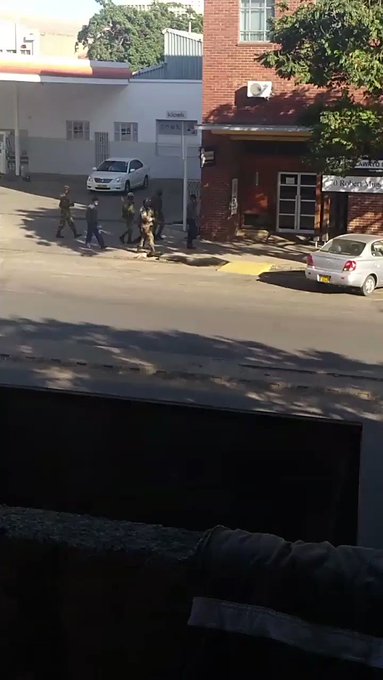 Commenting on the shutdown, former information minister, Jonathan Moyo, said some occult seemed to be in panic mode.

“More sights and sounds of soldiers and police acting funny in Bulawayo this morning. Some occult seems to be in panic mode, since going public with weird coup rumours. Someone else seems to be poking the panic, to expose it. The result is confusion in the streets!”