MASVINGO – A top Zimbabwean broadcaster, Tendai Madondo who is now based in Ireland has recognised the bravery of a Chiredzi mother who plucked her child out of the jaws of a crocodile by starting a chicken rearing project for her.

Madondo a former manager at ZBC and ZIFM confirmed the project to The Mirror and said she has started by assisting Maurina Musisinyana (30) with 50 chicks which she will gradually increase to 300.
From there Madondo plans to start a cloth manufacturing project. She said the Musisinyana’s extra-ordinary bravery against the crocodile shows that she is a determined woman who when she sets out to do something will persevere despite daunting odds.

An upbeat Musisinyana told The Mirror that she received the chicks and was busy overseeing the construction of a foul run. Musisinyana whose husband works as a security guard in South Africa said she never had such an opportunity in life and the project was going to change her.

Construction of the foul run is also sponsored by Madondo.

“When I saw her story I said to myself here is the spirit of tenacity, a spirit of somebody who when they decide to do something they will do it up to the end even in the face of unimaginable challenges. I am convinced that by tapping and investing into such a person, we can maximise her potential and change her life.

“I tracked her down and asked what she wanted to do. I bought 50 chickens for her just as a start but my idea is for her to have 300. We will then move to a cloth manufacturing project,” said Madondo.

The story of Musisinyana touched the World.

Sometime in April she was fishing along Runde River when she heard a scream from one of her two sons who was playing nearby. She saw Gideon Kokeni (3) being dragged into the river by a crocodile.

She ran over and covered the crocodile’s nostrils with one arm while she pulled the son’s head from the reptile’s jaws with another. The reptile released the boy but not before biting Musisinyana on the hand and retreating into the water. 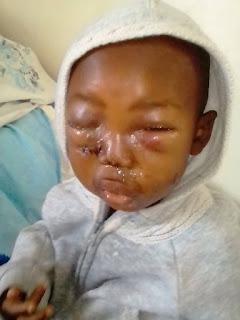 “Musisinyana showed rare mother instincts by going to challenge the crocodile, putting her hand into its mouth until the reptile released her child. This is a story of immense bravery and unbelievable courage by a woman who is not educated, who is not so exposed but who just have mother instincts and says I will rescue my child,” said Madondo.
#MasvingoMirror