STAVANGER, Norway (AP) — Rodney Horgen recalled the moment he thought he was facing the end: when a huge wave crashed through the Viking Sky cruise ship’s glass doors and swept his wife 30 feet across the floor.

Horgen, 62, of Minnesota, was visiting Norway on a dream pilgrimage to his ancestral homeland when the luxury cruise quickly turned into a nightmare.

The Viking Sky was carrying 1,373 passengers and crew, going from Norway’s Arctic north to the southern city of Stavanger when it had engine trouble along Norway’s rough, frigid western coast. Struggling in heavy seas to avoid being dashed on the rocky coast, the ship issued a mayday call Saturday afternoon.

Horgan said he knew something was badly amiss when the guests on the heaving ship were summoned to the vessel’s muster points.

“When the windows and door flew open and the 2 meters (6 feet) of water swept people and tables 20 to 30 feet that was the breaker. I said to myself, ‘This is it,’” Horgen told The Associated Press. “I grabbed my wife but I couldn’t hold on. And she was thrown across the room. And then she got thrown back again by the wave coming back.”

Photos posted on social media showed the ship listing from side to side and furniture smashing violently into the ship’s walls. The hands and faces of fellow passengers were cut and bleeding from the shattered glass, he said. 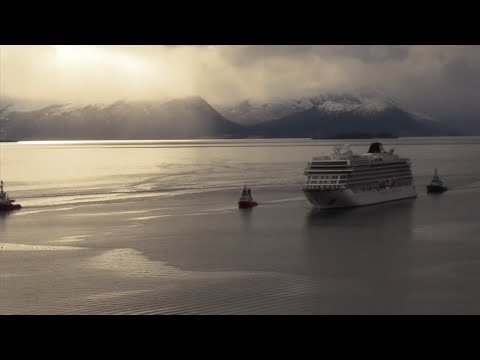 An experienced fisherman, Horgen said he had never before encountered such rough boating conditions.

“I did not have a lot of hope. I knew how cold that water was and where we were and the waves and everything. You would not last very long,” he said. “That was very, very frightening.”

And yet, the scariest part was yet to come.

That was when hundreds of passengers, including Horgen, were winched off the heaving ship by helicopter, one-by-one as winds howled around them in the dark of night, by rescue workers trying to evacuate everyone on board.

Waves up to 26-feet- (8-meters-) high were smacking into the ship, making it impossible to evacuate anyone by boat.

The ship was within 100 meters (300 feet) of striking rocks under the water and 900 meters (2,950 feet) from shore when it stopped and anchored in Hustadvika Bay so passengers could be evacuated, Coast Guard official Emil Heggelund told Norway’s VG newspaper.

Norway’s Joint Rescue Coordination Center stepped in, sending in five helicopters. Passenger Alexus Sheppard told the AP that people with injuries or disabilities were winched off the cruise ship first.

“It was frightening at first. And when the general alarm sounded it became VERY real,” she wrote in a text.

Janet Jacob, among the first group of passengers evacuated to the nearby town of Molde, told Norwegian broadcaster NRK that the winds felt “like a tornado” and prompted her to start praying for everyone on the ship.

“I was afraid. I’ve never experienced anything so scary,” she said.

“We saw two people taken off by stretcher,” passenger Dereck Brown told Norwegian newspaper Romsdal Budstikke. “People were alarmed. Many were frightened but they were calm.”

Viking Ocean Cruises, the company that owns and operates the ship, said 20 people were injured and received treatment at medical centers.

The airlift evacuation went all through the night and into Sunday morning, slowing for a bit when two of the five rescue helicopters had to be diverted to save nine crewmembers from a nearby ailing cargo ship.

In all, 479 passengers were airlifted to land, leaving 436 passengers and 458 crew members onboard, the company said, when the Viking Sky’s captain decided on a new plan.

Einar Knudsen of Norway’s Joint Rescue Coordination Center said the airlift was halted when the captain decided before noon Sunday to try to bring the cruise ship to the nearby port of Molde on its own engines.

“The conditions were good enough for the captain to have no more evacuations,” Knudsen told the AP.

Three of the ship’s four engines were working so a tug boat and two other vessels assisted the Viking Sky as it slowly headed to Molde under its own power. It finally docked at the port late Sunday afternoon, the cruise company said.

The Viking Oceans Cruise company said the ship’s next scheduled trip, to Scandinavia and Germany that was to leave on Wednesday, was cancelled. Norway’s Accident Investigations Board said the ship would remain in Molde, pending an investigation.

The Viking Sky was a relatively new ship, delivered in 2017 to operator Viking Ocean Cruises.

It had departed for a 12-day cruise from the southern Norwegian city of Bergen, visiting the Norwegian towns and cities of Narvik, Alta, Tromso and Bodo before its scheduled arrival Tuesday in the British port of Tilbury on the River Thames. The passengers were mostly an English-speaking mix of American, British, Canadian, New Zealand and Australian citizens.

Viking Cruises chairman Torstein Hagen praised the rescue operation by Norwegian authorities and the actions of the vessel’s crew.

He told the VG newspaper that the events surrounding the Viking Sky were “some of the worst I have been involved in, but now it looks like it’s going well in the end and that we’ve been lucky.”

Shipping tycoon Hagen is one of Norway’s richest men and the founder of the Switzerland-based Viking Cruises that operates river and ocean cruises.

When asked why the cruise ship ventured into an area known for its rough waters in the middle of a storm that had been forecast by meteorologists, Knudsen, from Norway’s rescue service, said it was the captain’s decision to proceed with the cruise.