South African President, Cyril Ramaphosa, has fired back at United States (US) President, Donald Trump, after the latter waded into the local land debate last week.

Ramaphosa takes a page out of Mugabe’s book

It’s an ironic turn of events, as comparisons between the two Sub-Saharan nations have been drawn with uneasiness. In fact, a report by the Cato Institute, which some argue led to Trump’s statements, explicitly remarked that South Africa would become the next Zimbabwe due to the destruction of private property rights. 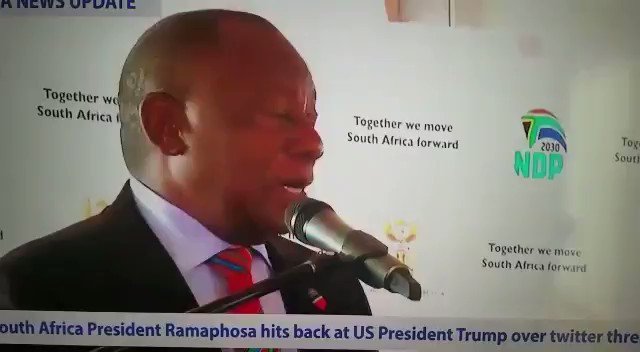 #InspiredByMugabe South African President Cyril Ramaphosa lashes @realDonaldTrump over land reform comments: “I don’t know what Donald Trump has to do with South African land because he has never been here. He must keep his America, and we will keep our South Africa.”

While Mugabe infamously remarked ‘Blair keep your England and let me keep my Zimbabwe’, in reference to then British Prime Minister, Tony Blair’s, opposition to the land reform process, Ramaphosa said this to Trump on Sunday:

“I don’t know what Donald Trump has to do with South African land because he has never been here. He must keep his America, and we will keep our South Africa.”

According to ZimLive, Ramaphosa was speaking at Musina, in the Limpopo Province, when he directed the fiery rebuttal Trump’s way.

The South African President added that Trump should deal with issues in his own country, pointing to the decimation of Native Americans as a direct result of colonisation, saying:

“When I meet him I will tell him, I will say you, Donald Trump, you are even worse because when your forebears came to America, they found the natives, the indigenous Americans and they wiped them out, they killed nearly all of them.”

Ramaphosa also added that Trump had done nothing to alleviate the oppression of apartheid, and therefore did not have a right to meddle in South Africa’s affairs. Ramaphosa maintained that the land debate would be dealt with internally, amongst all South Africans, saying:

“We are living as a nation, black and white. We will find solutions for our land question, so Donald Trump must leave us alone.”