Accra, Ghana (CNN) – Funerals are a big deal in Ghana and it is not uncommon, in some parts, for a ceremony to last up to seven days, drawing thousands of crowds adorned in flowing red and black robes and gold jewelry.

Some families even hire professional mourners to cry at the funeral of their loved one because “it serves as a reward to the person who has died,” says Adwoa Yeboah Agyei, who owns The Funeral Shop and Services, a franchise with locations across Accra. 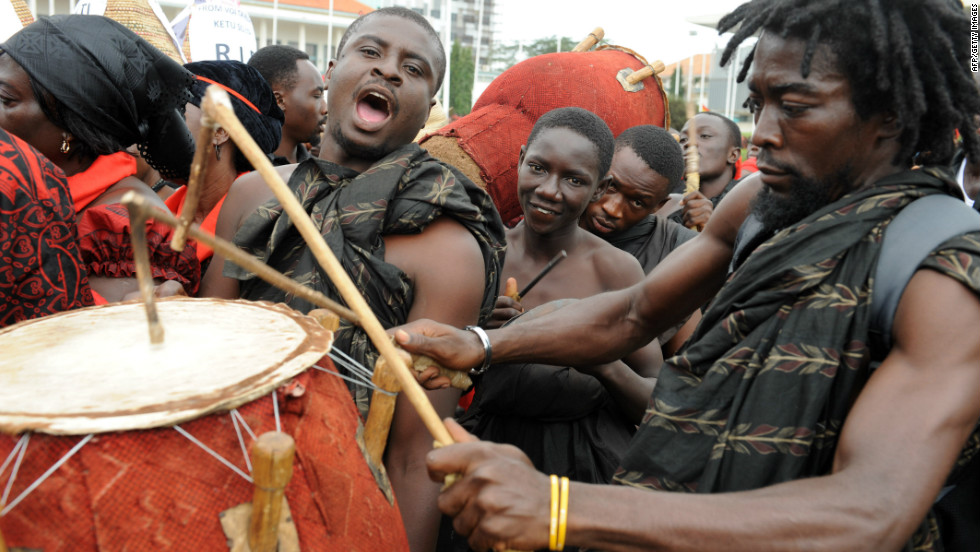 Ghanaian funerals are heavily symbolic and rituals involved include giving offerings to the spirits of the ancestors and loud traditional dancing and drumming to accompany the dead on their journey.

But a centuries-old tradition has come to a halt.

Since Ghana’s President Nana Akufo-Addo suspended all public gatherings in mid-March in the wake of the coronavirus pandemic, burials have been limited to no more than 25 people in the West African nation.
Obed Ampadu-Asiamah’s 73-year-old father, Daniel, passed away soon after the announcement following complications from a stroke.
Obed has been scrambling to make painful phone calls send notices informing attendees he could only invite 25 family members and friends. They originally expected 2,000 people and an official funeral has been postponed to a later date.
“We had to cut all the in-laws and the grandchildren. None were able to attend,” he told CNN, his voice shaking.
“We could only provide six slots for members on my father’s side of the family and three for members of his church.”
The large funeral home they rented to hold the ceremony was moved into a small, private chapel within the same venue.
Face masks concealed the anguish on the faces of mourners dressed in red and black, as they stood several feet apart with heads bowed in remembrance of a highly respected man, who established churches in parts of West Africa.

At Transitions, Ghana’s largest private funeral home, a once heavy flow of ceremonies now trickles at a slow pace.
Genevieve Carnelius, the general manager, stated that finances and operations have been badly affected, but says her priority now is to work with clients like Obed to remotely reschedule their loved ones’ funerals to uncertain future dates.
The home currently offers online live streaming from their chapel, where Ampadu-Asiamah’s burial service took place, and where mourners across the globe can view the ceremonies of their loved ones.
Once a lucrative sector, businesses catering to funerals are reeling.
Maryam Abdullah is a fashion designer who sews traditional garments primarily for weddings and funerals.
In an empty shop once bustling with customers, she sighed as she explained how Covid-19 has affected her business.
“No one is coming. Even the people who have already brought cloths for me to sew have not returned to pick them up, said Maryam. She understands why, though. “If this is what it takes to stop the spread of this coronavirus, I am okay.”
For now, she prefers her clients to stay at home because she feels more protected from contracting the virus herself, but it will only be a matter of time before funds run dry, she added.

A stray from traditional customs

Shaking hands with the family of the deceased is a deep-rooted tradition in many Ghanaian tribes that has taken place for hundreds of years and has become a mandatory part of ceremonies to show respect for the dead, says Queen Naa Tsotsoo Soyoo I, a Ghanaian Queen mother, who forms part of a powerful group of traditional women leaders.
She explained how significant the ban on mass funeral gatherings has affected the customs of such ceremonies.
“A significant part of funerals is bringing families together to embrace through handshakes, hugs and to mourn in close proximity of one another,” said Queen Naa.
“The immediate implication of what is now taking place is that families will be unable to connect. This is something that has never happened in generations and it is definitely going to have a social impact.” 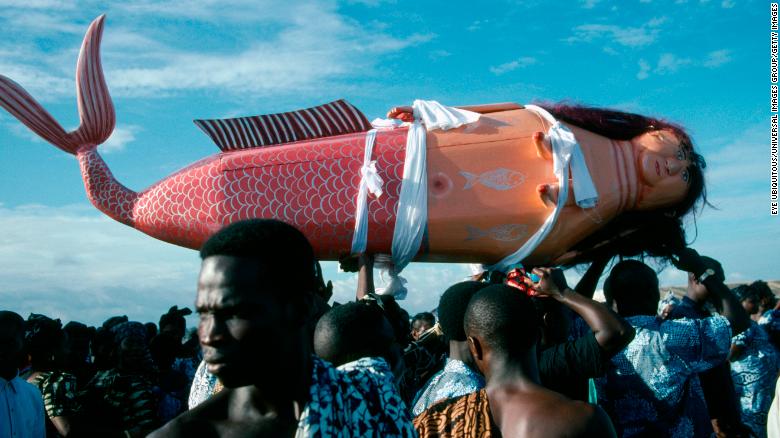 Coffin made and painted to resemble a mermaid for Ga tribal priestess of sea god carried by funeral guests.
Despite all the sudden changes to traditional practices at funerals, she acknowledged that certain inherent rites will never go away. For example, in Islam, the second largest religion practiced in Ghana, senior Muslim members of the community must recite Quranic verses over the deceased immediately after designated family members perform a ritual cleansing of the body.
The person must be buried within 24 hours of death.
“With all that is going on, the testament of a funeral will always be a view of how a person lived life and the core of every funeral is that the individual is sent off with respect and dignity,” she added.
No one can predict how long the effects of Covid-19 will alter lives as we once knew it. But Queen Naa is certain of one thing thing. “There will be many celebrations of life when this is all over.”