Gary Cahill and Harry Kane scored the goals as England warmed up for the World Cup by beating Nigeria 2-1 in their friendly at Wembley.

The recalled Cahill headed England ahead in the seventh minute, before Kane added a second with a fierce, low drive six minutes before the break, meaning the striker has now scored eight goals in his last seven appearances for his country.

Alex Iwobi pulled a goal back for Nigeria right at the start of the second half, but it was not enough as England – in front of a crowd of just over 70,000 – extended their unbeaten run to nine matches.

Man of the match: Gary Cahill

In a first half dominated by England – playing in their now familiar 3-4-3 formation – it was the hosts side who opened the scoring through an unlikely source at a sun-drenched home of football.

Kieran Trippier swung in a corner from the right for Cahill – making his first England appearance since October – to rise highest and power a brilliant header into the top right-hand corner of the net, despite the presence of a Nigeria player on the line.

That was the experienced Chelsea defender’s first goal for 13 months and it may have played him into Gareth Southgate’s starting XI for England’s opening World Cup fixture against Tunisia on June 18.

With all eyes on Raheem Sterling after his eventful week, the Manchester City forward missed the target from a tight angle when through on goal just before the quarter-hour mark, before firing over the bar from just inside the box seven minutes before the break.

The pace down the flanks of Jesse Lingard and Sterling was causing Nigeria’s back-line all kinds of problems in the first period, with England doubling their lead after 39 minutes.

Gary Cahill was handed a chance to impress in defence in place of Harry Maguire, who was a slight injury doubt, while Kieran Trippier and Ashley Young were selected as wing backs. Raheem Sterling was also given the nod to start in attack despite having to apologise to his team-mates for his late arrival to the squad’s training base earlier in the week.

The visitors gifted the ball straight to Eric Dier in central midfield, and he fed Kane, who in turn found Sterling on the edge of the area. The forward then laid the ball off for his captain, who beat Francis Uzoho with a fiercely-struck low drive that the Nigeria goalkeeper should have done better with.

Nigeria responded to that setback by making four substitutions at half-time, with those changes paying immediate dividends as the Super Eagles reduced the deficit within two minutes of the restart.

Iwobi’s clever pass sent Odion Ighalo through on goal and, after the former Watford striker had hit the post with a well-struck effort, the Arsenal midfielder was there to smash home the rebound for what was Nigeria’s first-ever goal against England.

It was also the first time England goalkeeper Jordan Pickford had conceded since the World Cup qualifier against Slovakia in September, but the hosts managed to keep their opponents at bay thereafter.

In fact, it was England who should have added more goals, with Dier glancing a near-post header inches off target just past the hour-mark before Southgate started to ring the changes.

The man of the moment, Sterling, capped off an eventful game by picking up a booking for simulation, but Southgate will be pleased to have given his first-choice XI – or as close as possible to his preferred starting line-up – a useful run-out, while not picking up any injuries in the process.

Gareth Southgate: “The first half was as good a half as we’ve had. There was a lot of unselfish one and two-touch play. Our play from the back had good composure. It would be easy to say we were complacent in the second half but that wasn’t the case.

“We didn’t come to terms with their change in formation or work out their midfield quickly enough. We were a bit slow to react at the back and then it was a really good test for us. That five or six-minute spell we have to learn from because in a tournament that’s enough to put you out.”

Man of the Match – Gary Cahill

The central defender was a surprise selection in England’s back three, but got the nod due to fitness concerns over Leicester City’s Harry Maguire, who had barely trained all week.

However, the 32-year-old took his chance after producing a rock-solid defensive display, reminding Gareth Southgate of his expertise at the back.

The centre-back – in his first Three Lions appearance since October – also opened the scoring with an early bullet header to end a 13-month wait for a goal and may now start against Tunisia in England’s opening World Cup clash later this month. 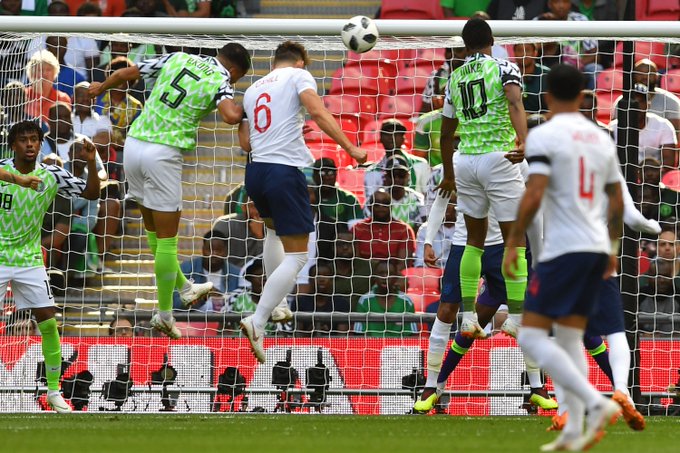 The Three Lions take on Costa Rica at Elland Road on Thursday night in their final warm-up game ahead of the World Cup.

Nigeria, meanwhile, face the Czech Republic on Wednesday afternoon in Austria in what will also be the Super Eagles’ last fixture before Russia 2018.