In an intense rematch, Chisora brought constant pressure and was up on two of the three cards when he was stopped.

But the 34-year-old – who had been deducted two points – left himself exposed to a crushing left to the jaw.

Afterwards, Whyte called out Joshua, who stepped up to the ring and said Whyte was third on his list of targets.

IBF, WBO and WBA champion Joshua has made it clear he hopes to fight WBC title holder Deontay Wilder, with Tyson Fury a second target.

The 29-year-old moved from his commentary position, climbed to the ring ropes and asked fans at London’s O2 Arena if they would be interested in him fighting Whyte, prompting cheers. 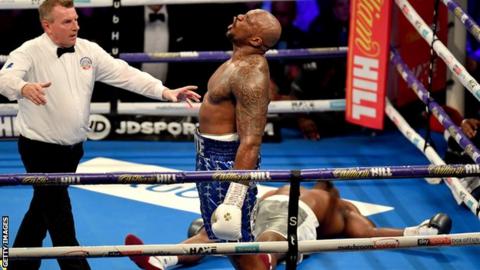 “So if the Whyte fight gets made I don’t want to hear any boos,” said Joshua.

“We know how the list goes, who is one and two. If there’s anyone that deserves a shot, if it isn’t them it’s you.”

Whyte stormed from the ring as Joshua explained his place in the pecking order. But promoter Eddie Hearn later said a bout between the pair was a case of “when, not if” as he expects Whyte to become a mandatory challenger.

In defeating Chisora, Whyte showed more elements of progress as he boxed patiently against a rival who ploughed forward time and again.

Whyte, 30, seemed more cautious than during their heavy-hitting meeting in 2016 when he shaded a points win after 12 thrilling rounds which left many fans calling for a repeat.

The rematch was again played out at pace, with Whyte picking smart shots under pressure. A hard counter-right in the opening round and a short uppercut in the second caught the eye, while a shot drilled to the body jolted Chisora in eight.

But Chisora landed good work of his own as he closed the distance, with a heavy right hook getting home in the sixth.

He was docked points – for repeated low blows in the eighth and an elbow in the 11th – perhaps tempting him to chase the contest without knowing two ringside judges had him ahead.

In missing with a shot of his own, he was made to pay as Whyte swept a left hook to the jaw, leaving him in need of lengthy attention from his corner with the ninth loss of a 38-fight career sealed.

“I said it wasn’t going the distance,” said Whyte. “I was trying to box disciplined and take my time. I hurt him in the first round and thought ‘you have 12 rounds to do this’. I knew it would come.

“It was 23 rounds of carnage. This is my time now. Joshua is talking rubbish, my career needs to progress. Time is ticking.”