Cardiff City striker Emiliano Sala was on board an aircraft which went missing near the Channel Islands on Monday evening, French authorities have confirmed.

The French civil aviation authority confirmed to Sky Sports News that Sala was aboard the aircraft, which disappeared from radar off the coast of the island of Guernsey.

Local air traffic control said the aircraft was travelling from Nantes in western France to Cardiff when it went missing.

Sky Sports News understands Cardiff were expecting their new £18m signing to travel back to south Wales on Monday night.

Cardiff chairman Mehmet Dalman said: “We are very concerned by the latest news that a light aircraft lost contact over the Channel last night.

“We are awaiting confirmation before we can say anything further. We are very concerned for the safety of Emiliano Sala.”

Authorities say the Piper Malibu aircraft disappeared from radar near the Casquets lighthouse at about 8:30pm on Monday.

A search and rescue operation was launched and carried on until 2am on Tuesday, before being called off and resuming at 8am.

So far over 1,000sq miles have been searched by a total of five aircraft and two lifeboats. It is being co-ordinated by the Joint Emergency Services Control Centre.

There has been no trace of the aircraft.

The search is continuing.

In a statement, Guernsey Police said: “Guernsey Coastguard received an alert at 20:23 from Jersey ATC, that a light aircraft had gone off their radar approximately 15 miles north of Guernsey, initiating a major search and rescue operation involving both St Peter Port and Alderney lifeboats. Air Search 1 and 2 HM Coastguard helicopters are also involved in the search.

“The PA 46 Malibu, a single turbine engine aircraft was on route from Nantes in France, to Cardiff in Wales, with two people on board when it was lost off radar as Jersey ATC was attempting to make contact.

“A search model was created on SARIS, based on the likely ditching position, and all search and rescue assets were tasked to the area.

“The search was terminated at 02:00, with all search and rescue assets being stood down, due to strengthening winds, worsening sea conditions and reducing visibility.

“At this time, no trace of the missing aircraft had been found.

“Air Search 1 and a French rescue helicopter based in Cherbourg, resumed the search of the area at 08:00.”

HM Coastguard said the incident was not in the UK search and rescue area, although it confirmed it had sent two helicopters to help.

Sala flew to Cardiff on Friday morning to undergo a medical, which was completed at around 5pm. He passed it, but it was too late for him to be involved against Newcastle on Saturday.

The Argentine carried out press duties with Cardiff on Friday evening and posed for a picture holding a Cardiff shirt with fans outside the stadium.

As he was not required to train with Cardiff until Tuesday, Sala flew back to Nantes to sort out his personal affairs and to say goodbye to his friends and team-mates.

Sala’s most recent post on Twitter, at lunchtime on Monday, shows the Argentine – who became Cardiff’s club-record signing – bidding farewell to his former team-mates at Nantes. 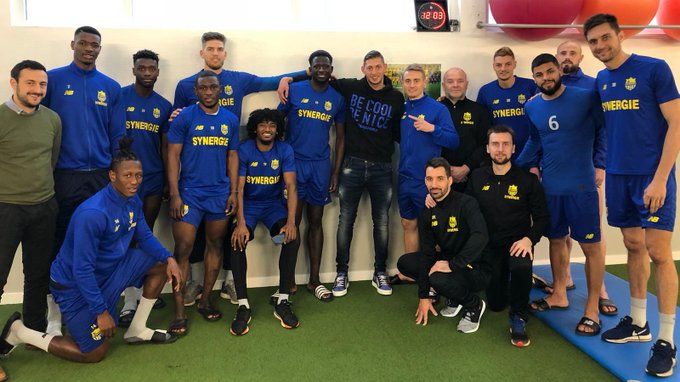 The striker was expected back in Cardiff on Monday night, ahead of training with his new club for the first time on Tuesday.

Nantes were due to travel to Entente Sannois for their Coupe de France clash on Wednesday evening, but Sannois, who play in the third tier of French football, have agreed to postpone the match.

A statement from Sannois’ official website read: “The round-of-32 Coupe de France match between Entente Sannois and Nantes initially scheduled for Wednesday, January 23 has been rearranged for Sunday, January 27 following the disappearance of the plane of the former (Nantes) player Emiliano Sala.

“Sannois wish all the best to Nantes and to the family of Emiliano Sala at this challenging time.

“The club is also thinking of all the people on board the plane.” – Source: Sky Sports