The National Council of the position MDC-T led by Thokozani Khupe has expelled Abednico Bhebhe from the party over gross violation of the party’s constitution by supporting another political party other than the MDC T.

Below are the resolutions of the MDC-T National Council meeting.

Upholding and Respecting the Supreme Court Judgment (SC56/2020) which ordered the holding of an Extraordinary Congress in terms of the party constitution to elect a substantive replacement for the late Party President Dr Morgan Richard Tsvangirai.

Acknowledging the same Supreme Court judgement recognises the existence of the constitution of the MDC without any qualifications.

Affirming that the Supreme Court judgement doesn’t entail deviating from the clear provisions of our constitution.

Realising that some members of the Party have left the party and joined or formed other political parties and that by that fact alone the said members have renounced their membership of the party.

Acknowledging the resolutions of the National Council Meeting of 9 May 2020, which meeting resolved to

b. go for the ordered Extraordinary Congress in line with the party constitution

c. recall those elected members, in parliament and local government, who have chosen to join or support other parties. 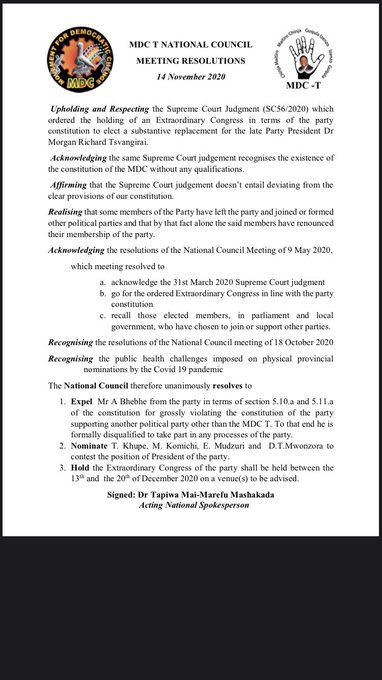