HARARE (Reuters) – Zimbabwe’s state security minister on Monday alleged a plot by “rogue elements” in the opposition working with Western governments to smuggle in guns and foment chaos, signalling another possible crackdown.

Without providing evidence, Owen Ncube told reporters the plot was part of a wider plan to oust President Emmerson Mnangagwa and his government illegally.

Similar accusations have been made against the opposition in the past since the time of former President Robert Mugabe, usually as a precursor to a crackdown.

“We are committed to non violence,” he tweeted.

Accused of being no better than the authoritarian Mugabe, the Mnangagwa government has since July detained and charged several politicians, anti-government activists and a journalist, accusing them of inciting violence and planning protests.

That has drawn criticism from Western embassies in Harare.

“Some rogue elements among us are conniving with some hostile Western governments to smuggle guns and set up so-called Democratic Resistance Committees, that are for all intents and purposes violent militia groups,” Ncube said.

“These plans are key components of ‘Operation Light House’, the brainchild of one Western power that seeks to destroy the democratic foundations of Zimbabwe, make the country ungovernable and justify foreign intervention,” he said, without naming the country accused.

His comments came after the National Security Council in July denied that Mnangagwa faced a military coup.

He faces growing anger over the worst economic crisis in more than a decade, marked by inflation above 700% and shortages of foreign currency and medicines in public hospitals.

“Zimbabwe’s security and stability is currently under siege from a number of threats being fomented by internal and external actors. The objective of this attack is to effect an unconstitutional change of Government following the outcome of the 2018 Harmonised Elections which was not favourable to the MDC-Alliance and its foreign backers. As State security arms of Government, we would like to assure citizens that we are watching the environment very closely and that we shall fulfil our mandate of ensuring peace, stability and development in Zimbabwe.

Zimbabwe experienced a down-turn in Its economic success from the late 1990s when the ZANU PF Government stood resolute in its thrust to address the long outstanding Land Question. Addressing the Land Question through the Fast Track Land Reform Programme at the beginning of the 21s, Century, drew battle lines between the ZANU PF Government, on one hand, and a host of Western-sponsored opposition forces, including the MDC, some civil society organisations (CSOs), labour and student unions as well as some professional bodies, on the other. The latter group has always alleged that all elections that the opposition lost were stolen and has shamelessly fabricated human rights abuses in order to justify regime change.

The latest ploy of regime change has manifested Itself in the opposition’s never-ending calls for demonstrations aimed at diverting Government from pursuing its Vision 2030 agenda and stocking factionalism within ZANU PF. They have gone to the extent of lying that there is a fall out between His Excellency, President E.D MNANGAGWA and Vice President, General (Rtd) Dr Constantino CHIWENGA. They have also attempted to cause Western countries, the SADC and Churches to turn against Government by making false allegations of human rights abuses. The negative forces have even gone to the extent of stage managing abductions and propagating lies on social media. We also notice attempts by self-exiled G40 elements, such as Professor Jonathan MOYO, to destabilise the Security Services through making false accusations about Security Officers who are unwavering in their determination to defend national sovereignty.

The methods used by State Security agents in Zimbabwe are within the confines of the law. In the West, the Logan Act and the Patriot Act allow the use of methods which, if adopted by our Security Services, would be condemned as acts of repression. As Security Services, we know and appreciate that they will never see anything in good light until the Land Reform is reversed and the opposition comes to power.
No country in the world and no sane people would tolerate elements who openly mobilise to close their country’s borders, particularly when the COVID-19 pandemic is threatening lives and the economy. In any country, such people would be treated as traitors. At international law, a blockade is tantamount to a declaration of war. Government and State Security agents, in particular, have a duty to take appropriate measures to protect the flow and integrity of commerce across our borders.

There have been calls for dialogue by regime change elements within and outside the country. These calls completely ignore the ongoing Political Actors Dialogue (POLAD) to which all parties were invited. There is nothing wrong In accommodating people and views that are not on the table. There is, nevertheless, the mischievous agenda to ignore the Y principles of democracy by attempting to push ZANU PF to abandon the mandate it won from the people in the 2018 harmonised elections. Anyone aspiring to lead the country should wait until they get that mandate from the people In the 2023 harmonised elections. Anyone wishing to help move the country forward before then, should join POLAD.

We are watching attempts to drive Zimbabwe into chaos. Some rogue elements among us, are conniving with some hostile Western governments to smuggle guns and set up so-called Democratic Resistance Committees that are, for all intents and purposes, violent militia groups. These plans are key components of “Operation Light House”, the brainchild of one Western power, that seeks to destroy the democratic foundations of Zimbabwe, make the country ungovernable and justify foreign intervention. As the State Security sector, we shall take concrete action to deal with such threats.

While Government is moving on with its reform agenda, we note the need for the MOC-Alliance to reform itself into a normal opposition political party that embraces outcomes of democratic processes and has the patience to wait for another opportunity to prove to voters that it deserves their trust. The world over, opposition parties in democratic dispensations have a constructive role to play in between elections.

They do not push for agendas to violently take over power, destroy public infrastructure and sabotage the livelihoods of citizens.

We want to re-assure citizens that the State Security Sector is alive to the machinations of the MDC Alliance, hostile CSOs and their Western handlers. Our gallant Security men and women will stand firm in defence of national interests and sovereignty in order to allow Government to focus on delivering its Vision 2030. 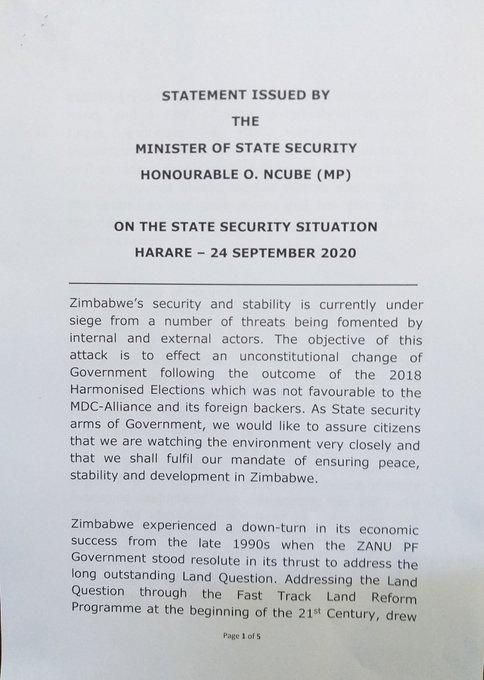 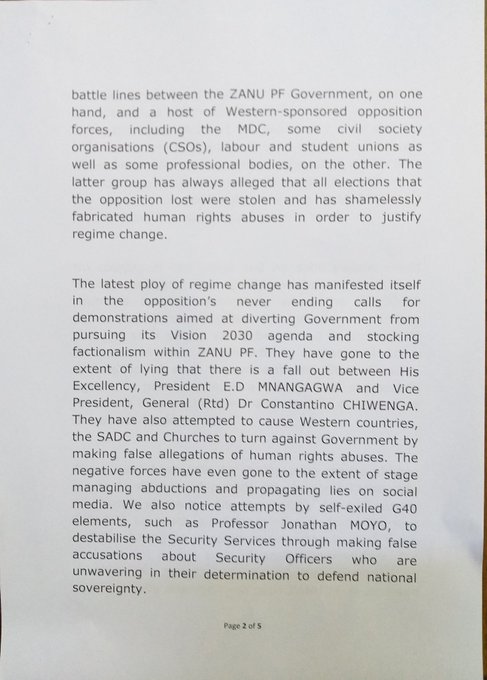 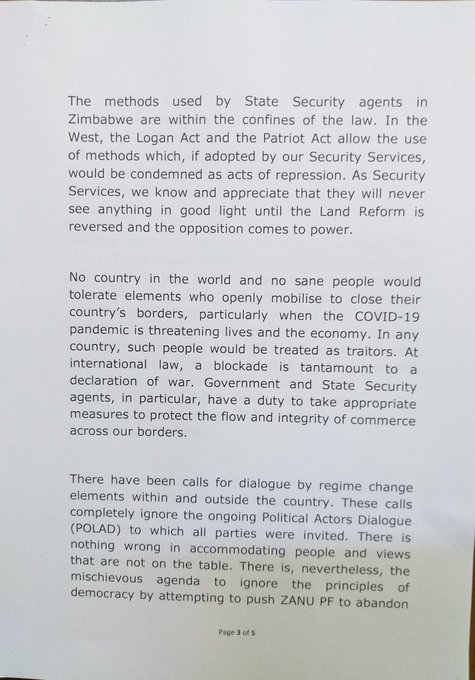 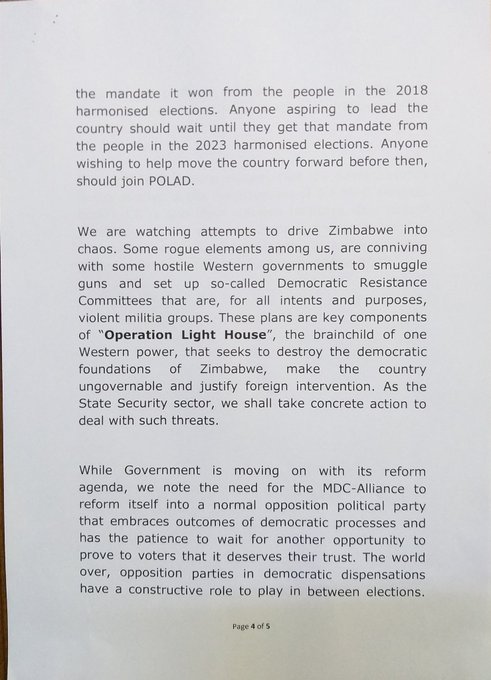 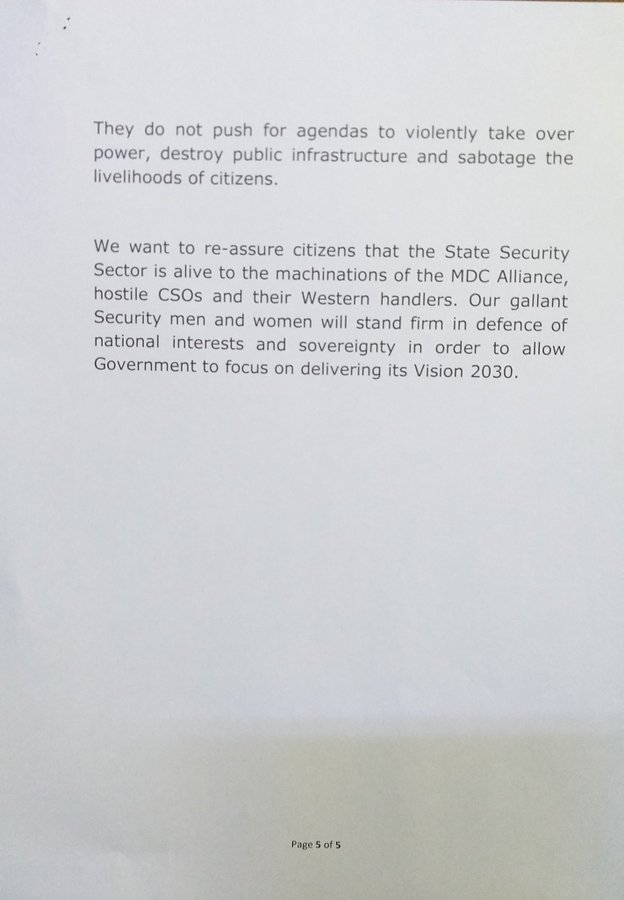