HARARE –Zimbabwe’s military and police have blamed each other for the August 1 shootings that killed at least six people during a protest in Harare.

General Philip Valerio Sibanda‚ a ZDF commander‚ in a letter addressed to the commission‚ said: “The Zimbabwe Defence Forces will submit its views in writing.”

Police Commissioner General Godwin Matanga also wrote that they wanted to testify in camera because “the evidence to be disclosed would be inimical or prejudicial to public interest or operations of the State”.

Both were later to appear live on state television.

The police were the first to take to the stand. Chief Superintendent Albert Ncube‚ officer commanding of the Harare Central District‚ said he only had 167 police details under his command on August 1 because most were assigned countrywide for policing duties associated with the general elections. Therefore‚ he told his seniors that he needed reinforcements from the Police Protection Unit.

Ncube said‚ legally‚ all army personnel were supposed to follow his command in executing policing duties – but that was never the case because at no point was he told that the military would be part of the team to quell the civil unrest under way at the time.

He added that as part of policing duties on the day “an order was given that no firearms were to be used to safeguard the credibility of the election result as the country was in an election period”.

When Matanga took to the stand‚ he said President Emmerson Mnangagwa “supported and authorised” the deployment of the army and Matanga directed his military counterpart to act. Therefore‚ it was done above Ncube’s pay grade.

Matanga told the commission that the army had acted in earnest.

“If ever the soldiers fired their weapons‚ if ever they did‚ they did so in good faith‚” said Matanga.

Brigadier-General Anselem Sanyatwe‚ the Presidential Guard commander‚ said that a picture of a soldier kneeling down to take aim while another soldier tried to stop him – a picture that went viral – was interpreted incorrectly.

“All those were shot before we deployed and this is true because we never came across a dead body‚” he said.

Commander of the Zimbabwe Defence Forces‚ General Philip Valerio Sibanda‚ told the commission that he heard gun shots before soldiers were deployed.

Sibanda’s testimony attempted to dispel the widely held view that the army had shot civilians. He said the only order given was to “advance and not take a kneeling position” and if soldiers had fired their AK47 rifles‚ one round of ammunition could have taken at least six lives.

“I don’t believe that any soldier opened fire on civilians. If that had happened‚ the death toll would have been higher‚” he said.

Both Sibanda and Sanyatwe suggested that the violence was likely a result of the MDC’s “militant” wing – The Vanguard – which Sanyatwe said consisted of army deserters‚ and which Sibanda said had arms caches. 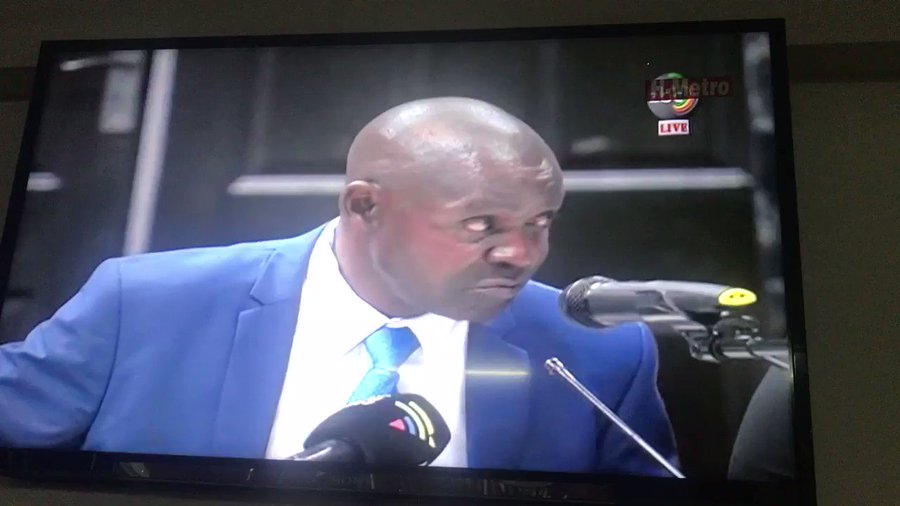 WATCH: Can i be honest as a General Part 2:
Brig Gen Sanyatwe says any killings were before military joined

The commission, Madhuku in particular, probed and probed but Sibanda stuck to the script. A third force, not soldiers, had killed people om August 1.

Like Sanyatwe, Sibanda just fell short of accusing MDC activists of being behind the killings. The MDC was arming its supporters, he said.

“There is no hard evidence but a belief in the intelligence services that members of the Vanguard (an MDC affiliated group) have got some weapons. That belief is there, and I’m sure we will get to know about it. It won’t be long before somebody gets arrested and we get to prove this point,” Sibanda warned.

Sanyatwe claimed the MDC was getting help from military deserters. The evidence, he said, was in the behaviour of the protesters on August 1: they had no fear.

“The behaviour of those rioters… it was an indication of what we have all along received that the opposition have to an extent a militant organisation because knowing by the nature of Zimbabweans there is no civilian who can brave it to stone at a military vehicle, to make matters worse an APC (armoured vehicle) and those soldiers armed with AK47 assault rifles,” said Sanyatwe.

“These militant groups according to the intelligence we have are basically members who could have deserted from the army and other institutions because they were advancing, braving even warning shots in the air shouting ‘bata musoja’. That behaviour is a characteristic of a really trained member of the society and not civilian.”