MDC-T Acting President Thokozani Khupe has announced that the Supreme Court will, on Tuesday, hand down a judgement that  clarify who is the real leader of the opposition party between Khupe and Nelson Chamisa.

In a tweet on Tuesday morning Khupe said, “I’ve just received a call from my lawyer Prof. Lovemore Madhuku informing me that the SC, judgment will be handed down today @ 3pm. I call upon our members and supporters to remain calm & accept whatever the outcome of judgement is. In unity let’s renew and build our great Party and Country!”

However, MDC Secretary General Charlton Hwende said their lawyers did no know of the impending judgment.

Said Hwende, “Ms Khupe has just announced that the Supreme Court judgment will be issued at 3pm today. His supporters already celebrating and have attempted a hostile takeover of the MRT Building this morning. All Courts are supposed to be closed #COVID19 and our lawyers have not been informed.

“We don’t know why Ms Khupe is celebrating when she is not a member of MDC. Our Lawyers as at 11:45 had no knowledge of this judgement and are now busy checking with the Court.”

Commenting on the matter Professor Jonathan Moyo said the judgment will not change any status quo in the MDC. 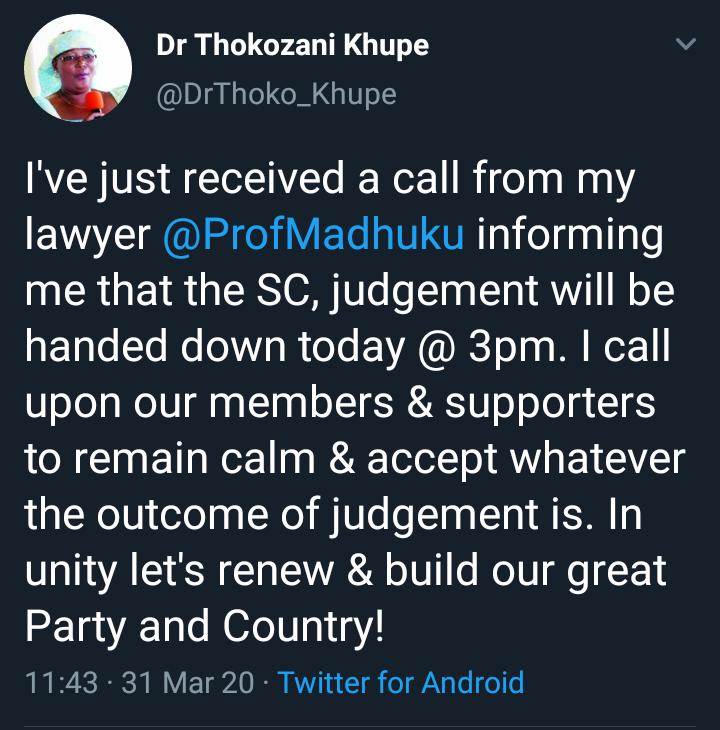 “Your post criminally betrays your advance knowledge of the brutum fulmen judgment.” Moyo told Khupe. “You last used this account in April 2018 before your congress where you became MDC-T President, today you’re MDC-T Acting President, again. #Coronavirus lockdown or not, judgment changes nothing!”

During the court hearing Madhuku had told the court that when Chamisa was appointed acting president during a meeting held in February 2018, it was in violation of the party’s constitution because Khupe was available to act as president during the time Tsvangirai was receiving treatment in South Africa.