CHICAGO (AP) — An overseas trip by R. Kelly is in limbo after his attorney asked a judge Friday for more time to provide details to the court about up to five concerts the R&B singer wants to perform next month in Dubai.

A Chicago pretrial hearing only briefly touched on a defense motion asking the judge in the sexual abuse case to approve Kelly’s travel, portraying him as desperate for concert income to pay bills amid his legal troubles .

Attorney Steve Greenberg told reporters outside court that he wanted to gather more information on the concerts to give Judge Lawrence Flood “a certain comfort level” about what the travel and concerts would entail.

Kelly’s entertainment attorney, Doug Anton, said any trip to the United Arab Emirates was off for now as contracts with Dubai concert organizers are reworked. He said celebrity singers often go to Dubai for appearances, then arrange concerts.

“The court requires more formalities,” he said, speaking at the courthouse.

A condition of Kelly’s bond is that he can’t travel outside Illinois without court permission. Judges often refuse that permission in felony cases, fearing defendants will go on the lam. If convicted on 10 counts of aggravated sexual abuse, Kelly could face decades behind bars. 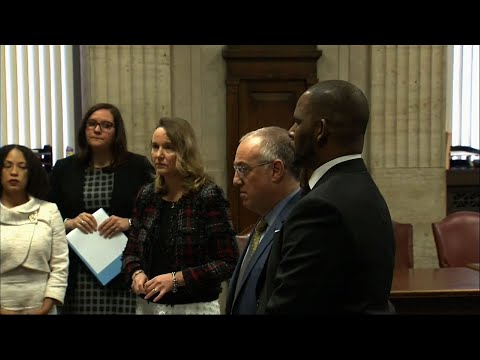 Greenberg said Kelly wasn’t a flight risk, noting that the Grammy winner traveled abroad for concerts prior to his 2008 child pornography trial and never missed a hearing date. Jurors acquitted him on all counts.

“If he goes to Dubai, he is going to come back from Dubai,” said Greenberg, who has said previously he is willing to “chaperone” Kelly to the Persian Gulf country if need be.

Judge Flood set the next court date for May 7, though the defense can request a hearing sooner to ask for a ruling on the motion to OK Kelly’s travel.

Despite court filings saying the sex-abuse allegations swirling around have led to the cancellation of several U.S. concerts, Doug Anton, says he had 150 emails Kelly received asking him to perform “everywhere possible.”

“Professionally, it is looking up,” he said.

Greenberg said Kelly also continued to make music and “has lots of material to release.”

But he also said Kelly’s bills, as a celebrity, are extensive, including because of child support payments he has had to make. Greenberg said a rule of thumb was, “The more money you make, the more money you spend.”

Kelly’s lawyers offered no details about the proposed concerts, including possible venues.

But Dubai’s luxury nightclubs often host hip hop and other artists for days at a time to perform and be seen among the millionaires of the skyscraper-studded city that is home to the world’s tallest building. Rich families also pay for celebrities at their parties.

Documents in several unrelated civil cases say Kelly in recent years typically made between $100,000 and $200,000 per concert. His lawyers wouldn’t say how much Kelly could be paid in Dubai.

“He hasn’t been offered enough, I can tell you that,” Greenberg said.