Country-hopping pop innovator Rina Mushonga gets her musical kicks from fusing the heritage and history of India, Zimbabwe and The Netherlands.

‘Like Paul Simon in a sweaty African dancehall club’, she crosses continents without missing a beat – serving up a perfect antidote to the rising tides of nationalism and populism.

Now residing in London, following stints in cities around the world, she’s preparing for the release of her new album In a Galaxy. Choc-full of buoyant melodies, shifting synths and Afropop beats, it serves up a smorgasbord of styles that reference everyone from Blood Orange to Baloji, Nina Simone to Sharon von Etten.

Four years in the making, In a Galaxy sees Rina filter out her distractions and focus on her own unique abilities and instincts. Working with  Grammy Award-winning producer Brett Shaw (Foals, Lady Gaga, Florence + the Machine) and Rotterdam synth whisperer Frans Verberg, she’s turned in a clutch of intelligent, diverse pop songs that will surely set the agenda for 2019 on their release in February.

Here, she let’s us in on its making…

You’ve said your new album In a Galaxy was inspired by a ‘year of transformation’ – can you tell us more about that? 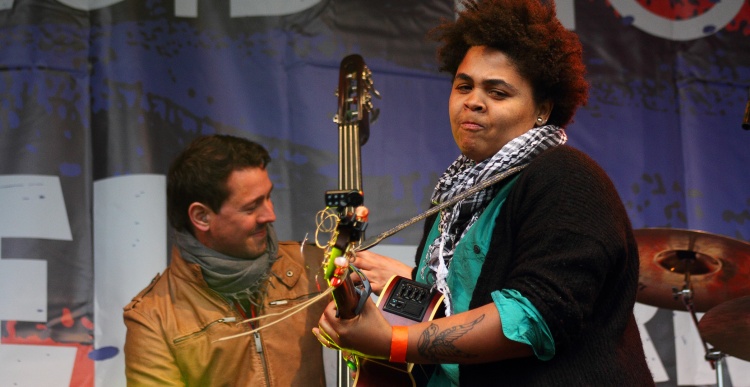 I’d recently read Ovid’s Metamorphoses and was really inspired by all the stories of transformation and just generally these beautiful, literally fantastic stories. It focussed my mind on transformation in general and I guess I started seeing it everywhere, in my own life also, having recently moved from Amsterdam to London, but I also felt it was a good theme to explore further. How I’ve changed and my music’s changed. How things aren’t always as they seem. Identity. It just bled into all these different ideas which ultimately helped form the album.

How and when did the record come together?

After having moved to Peckham I started writing and making sketches. I spent some time shaping those together with Frans Verburg in his basement studio in Rotterdam. Then when the time came to record I sort of stumbled on Brett Shaw’s studio in Peckham. I’d seen Florence Welch hanging around the Bussey Building a couple of times and figured there might be a studio somewhere close: a bit of a Google and Brett’s beautiful studio came up. I sent him an email with some demos and the rest is history.

What did you learn through the process?

I think my biggest takeaway from working on this album has been to trust and stand up for my own instincts more. Of course I care about what other people think of my music but I had this aching self-doubt about where everything was going and what I was doing it all for, and this constant sense of pressure to succeed. I needed to address all of that, and I think a lot of those thoughts I poured into the songs. It led me to the conclusion that if I was going to continue to make music it had to be all me – my voice, my sound and claiming the time and space to follow those down the rabbit hole. Moving to London was a big step, which sort of triggered a new self-confidence I guess.

What do you make of the album now it’s nearly ready for the world?

I think most artists will feel the same in that by the time an album is ready to head out into the world so much has happened behind the scenes already, artistically and logistically. I’m proud of what we’ve achieved. I feel that the choices I’ve made are already paying off. It’s scary sending something you’ve created out into the world to be judged. But I think it’s an accurate representation of these past few years. It’s joyful but there’s a lot of frustration and pain in there too.

How would you describe it yourself?

Warm, textured and colourful – it’s fun and a little dark too.

You call yourself a ‘global citizen’ – how has that influenced your sound?

I think it’s influenced my sound by making me more open – open to messing around with borders and messing around with genres. My whole life was mixed, mixed race, mixed cultures, mixed countries and music. So, it’s always been a part of how I write – now more than ever because I’ve taken the time and space to reflect on that and look back.

Who or what have been your biggest influences along the way?

I think literature has been a constant inspiration – a lot of ideas triggered by books I’ve read, but also learning how to write. I also draw a lot of inspiration from movies and TV. I think my music is quite visual. I write most things like a soundtrack to a scene or a collection of feelings or ideas. Musical influences range from Paul Simon to Joan Armatrading, Yeasayer, Johnny Clegg, Oliver Mutukudzi, Fleetwood Mac, Nina Simone.

What’s keeping you busy at the moment?

My nine-month-old daughter Zora is keeping me crazy busy. She’s crawling now so that’s fun…ish! Other than that, I’m busy prepping for live shows. I have a new band and we’ve been rehearsing a lot and preparing to play this new material live.

What artists are you most excited about right now?

Many musicians are worried about their digital earnings, with some saying platforms like YouTube aren’t rewarding creators fairly. Where do you stand on that issue?

I don’t wanna get all preachy about it, but it can be very demotivating knowing that it’ll take a miracle for most artists to see a decent cut from their own blood sweat n tears – unless you’re hitting Rihanna or Adele type numbers. Let’s be real – that’s the happy few. Most of us need to hustle hard and streaming is the future of how we consume music. The pillars of those streaming platforms, the artists, need to be way higher up on that food chain, and not even from a ‘cos we’re so special’ type place. Who do you think has to pay all those engineers and musicians and rent for studios? We do! There’s an ecosystem of creativity and productivity you’re funding by remunerating artists properly – I think that’s pretty fundamental really.

Rina Mushonga plays the Notting Hill Arts Club, London, on 28 November. Her new album, In a Galaxy, is out on 15 February. Pre-order here. First published by the M Magazine