Cape Town – American news agency Associated Press has apologised to Ugandan climate activist Vanessa Nakate after it cropped her out of a photograph posted on Twitter, sparking outrage.

The 23-year-old took to Twitter on Saturday expressing hurt over the photo posted on Friday, which cut out the black activist who stood on the far left with four white peers at a press conference on the sidelines of the World Economic Forum in Davos. This led to many Twitter users accusing AP of racial bias.

You didn’t just erase a photo

You erased a continent

But I am stronger than ever 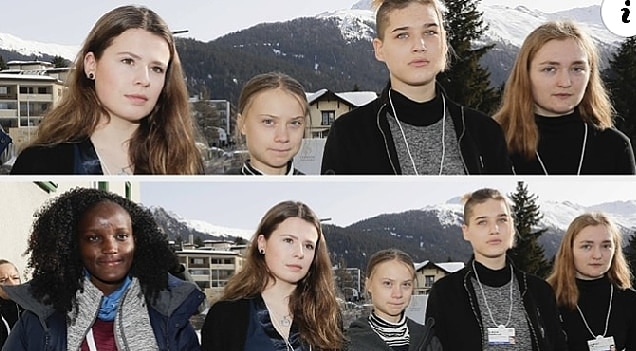 Nakate said she spoke out because she did not want something similar happening to another African climate activist, adding that now was the time for the world to “listen to the African voices”.

On the eve of the annual World Economic Forum in Davos, focus is on teenage activist Greta Thunberg as she prepares to challenge the global financial elite to fight climate change. Conway Gittens reports

“You didn’t just erase a photo; You erased a continent; But I am stronger than ever,” one of her several posts on the incident read.

In a video posted on Friday night and viewed over 590 000 times, Nakate said Africans did not deserve such treatment from the media, which she said was supposed to spread the message on the global climate crisis. She said various other news outlets had also edited her out of photographs.

“The people we expect to share our message – that’s the media – they are so disappointing. This is the first time in my life that I understood the definition of the word racism,” an emotional Nakate said.

Share if you can
What it means to be removed from a photo!

Share if you can What it means to be removed from a photo!

“Does that mean that I have no value as an African activist or the people from Africa don’t have any value at all?”

In a statement, AP’s executive editor Sally Buzbee said the news agency regret publishing a photo that cropped out the only person of colour in the group.

“As a news organization, we care deeply about accurately representing the world that we cover” Buzbee said. “We train our journalists to be sensitive to issues of inclusion and omission. We have spoken internally with our journalists and we will learn from this error in judgment.”

Buzbee posted another apology on Twitter after Nakate expressed dissatisfaction with the AP statement.

“Vanessa, on behalf of the AP, I want to say how sorry I am that we cropped that photo and removed you from it. It was a mistake that we realize silenced your voice, and we apologise. We will all work hard to learn from this. Sincerely, Sally Buzbee,” she wrote.

Am sorry but this is not an apology

Vanessa, on behalf of the AP, I want to say how sorry I am that we cropped that photo and removed you from it. It was a mistake that we realize silenced your voice, and we apologize. We will all work hard to learn from this. Sincerely, Sally Buzbee

Nakate has received support from many on Twitter including her fellow activists.

Well-known 17-year-old Swedish activist Greta Thunberg replied to the Ugandan’s video, saying she was “so sorry they did this to you”.

“You are the last one who would deserve that! We are all so grateful for what you are doing and we all send love and support!! hope to see you soon again!!” Thunberg said.

Fourteen-year-old American activist Alexandria Villaseñor said the crop was “just wrong” and urged the media to report honestly on the climate crisis, including who the voices on the issue were.

“Please stop referring to youth climate activists as the “Greta” of their area,” she tweeted. “When you do this, you erase their unique story, their unique & different work and *ahem*…their ethnicity & color. My PSA [public service announcement] today.”

Another Ugandan, 15-year-old Leah Namugerwa, also took to Twitter to call the media out.

“Africa has gone through enough. We’re the major victims of a climate crisis that we didn’t cause,” she said.

“As we’re struggling with environmental racism, media is fuelling the problem by denying African activists a voice.”