A tough road lies ahead for the SA economy, with job losses potentially reaching up to seven million as a result of the coronavirus pandemic, according to projections by National Treasury.

This would take the country’s already record unemployment rate as high as 50%.

In a briefing to members of the finance, appropriations and public accounts committees on Thursday, Finance Minister Tito Mboweni and Treasury Director General Dondo Mogajane painted a dire picture of the state of the South African economy.

The domestic economy was already taking strain before Covid-19 hit SA shores, Mboweni lamented. The ratings downgrades by Fitch, Moody’s and, more recently, S&P, have not helped the situation either.

“It is a sad day for me and for South Africa. If we are out of the JP Morgan Index by tomorrow, it is bad news,” Mboweni said of the S&P downgrade, further into junk status, which was announced late last night.

According to a presentation circulated among members of the Parliament committees, Treasury is projecting a contraction in the economy by 6.4%. Various forecasts show that the pandemic will force a downturn in the economy, followed by a sharp recovery in 2021, but that’s if we do things correctly, Mboweni said.

Treasury has outlined three scenarios the economy’s recovery path could take following the lockdown – but regardless whether there will be a quick, slow or long recovery; retrenchments are inevitable.

If the virus can be contained quickly and if the economy can bounce back, then job losses will come to just under three million. A slow recovery period will see over five million job losses. And in the worst case, where it will take longer to contain the pandemic followed by a slower economic recovery – more than seven million jobs will be lost.  This will push the unemployment rate to over 50%.

During the last global recession in 2008-09, SA lost one million jobs. 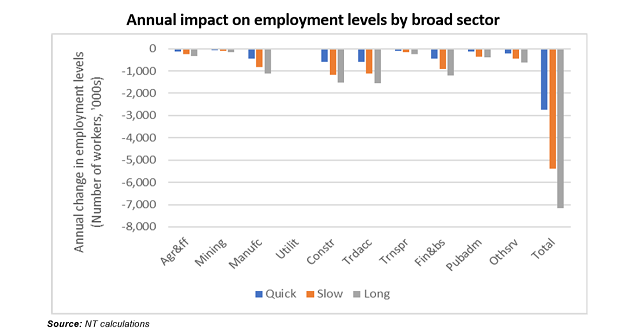 Treasury’s projections show the manufacturing, construction, trade, catering and accommodation and financial and business services sectors will be worse affected. Shocks to salaries and wages would also be larger for lower educated workers.

“The fact is that the lockdown had brought economic activity to a standstill,” Mboweni said. This has had implications for tax revenue collections, which will add pressure to government expenditure. Mboweni said that tax revenue might decline by nearly a third (32%).

The only way to close the gap is to borrow more and to reprioritise expenditure, which has warranted that Treasury table an adjusted budget much earlier this year, instead of October. Mboweni said that government will be looking to do away with “bells and whistles” and focus on what is needed to continue functioning. He did not rule out the sale of state-owned enterprises. “I can’t promise no sales of SOEs. There will be sales of poorly functioning SOEs,” he said.

Government is still in talks but has not yet finalised a $4.2 billion facility for Covid-19 support from the International Monetary Fund. “My understanding is no conditions will be attached,” said Mboweni. The country is also finalising a $1 billion loan from the New Development Bank. Government is still in talks with the World Bank about securing support of $50 million.

Although the economy is taking a knock, Mogajane pointed out that health interventions need to be prioritised. Government is following a three-phased approach over the next 18 months.

The first phase, expected to last six months, will focus on increasing health spending, supporting vulnerable households and provide fiscal support accompanies with monetary policy measures as well as the conclusion of the lockdown.

The second phase is focused on recovery, which would include a continued health response as well as an economic focus on supporting employment and investment.

The final phase or pivot phase, will be focused on positioning the economy for higher growth.

From Friday onwards, more businesses in sectors such as manufacturing, construction and in retail will be allowed to restart operations, while sticking to certain health and safety measures.

Overall business organisations such as Business Unity South Africa (BUSA), the Black Business Council (BBC) and the South African Chamber of Commerce and Industry (SACCI) agreed that government was moving in the right direction by reactivating parts of the economy, while still being cognizant of the health crisis.

“We see this as a work in progress,” said BUSA CEO Cas Coovadia. He said that BUSA would continue to engage with government to open up more sectors under level four.

BBC president Sandile Zungu said that while prioritising public health and saving human lives is important, businesses also have a mortality rate. “Some businesses, especially small business will not be able to open after lockdown because owners might not have resources and the reserves to help them restart. We have to think of the long term survival of businesses in SA,” he said. Government’s risk-adjusted approach to reopening sectors was welcomed, but warned that businesses can’t remain closed for too long, he warned.

Alan Mukoki, CEO of SACCI, said that while parts of the economy will be reopening, government needs to improve testing rates. SACCI has submitted to government that before any employees return to work, they be tested for Covid-19. Currently, government only requires workplaces to screen employees for symptoms. The virus however can be spread by those who are asymptomatic.

Mukoki said that testing will ensure that we do not have to move back and forth between Covid-19 risk of transmission levels. “It will be far more devastating to the economy. We can’t stop and start production cycles,” he said. “We can’t do pandemic mitigation, without mitigating against economic collapse. We have to do both… It’s not either or, it’s both.”