NEW YORK (Reuters) – A gauge of global stocks retreated from record highs on Monday but remained on track for a fifth straight month of gains while the dollar remained listless as investors adjust to the policy shift outlined by U.S. Federal Reserve Chair Jerome Powell last week.

U.S. stocks were mixed, with the Dow Industrials and S&P 500 lower while the Nasdaq posted gains. The S&P is up more than 7% for the month, putting it on track for its best August, traditionally a softer month for stock performance, since 1984.

Fed Vice Chair Richard Clarida on Monday followed on Powell’s comments, noting the central bank’s new policy view means a low rate of unemployment does not on its own trigger higher interest rates. Last week, the Fed said its new strategy plan is to use higher inflation when the economy is robust to offset the impact of periods of weaker prices.

“There is a reallocation of assets from sectors that are not performing, into sectors that are,” said Stan Gregor, chief executive officer of Summit Financial LLC in Parsippany, New Jersey.

“Right now the euphoria is stay long on technology and stay-at-home stocks.”

The dollar edged lower against a basket of major currencies and was set for a fourth straight monthly decline.

In Europe, stocks turned lower following the open of U.S. markets. Shares in Europe were initially higher as higher crude prices boosted oil and gas names while merger talks between major French utilities provided support for the sector. Trading in London was closed for a public holiday.

MSCI’s world equity index, which has risen more than 6% in August, is set for a fifth month of gains as massive monetary and fiscal stimulus outweighs concern about the outlook for a world economy battered by the coronavirus. 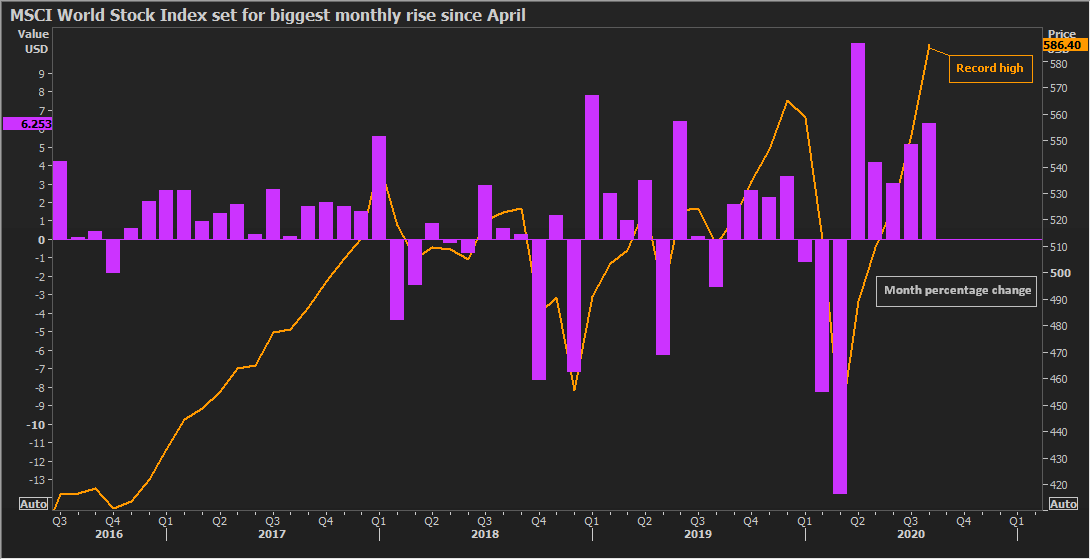 The expectations for the Fed to keep interest rates lower for an extended period kept the dollar in check, with a fourth straight months of declines its longest streak since 2017. The greenback hit a low of 91.989, its lowest since May 2018.