HARARE – The embattled micro-blog platform Market Watch Zimbabwe, rub by street black market money changing operatives who call themselves independent analysts focused on research into the Zimbabwean parallel markets as well as the stock market has suspended services after the government allegedly threatened them.

It is understood that the there are multiple websites and social media platforms run by big street money changers and Market Watch and ZimBollar research institute are said to be on Zimbabwe government radar for causing mayhem to the currency market.

Threats from the Government suggest that Marketwatch has been pushing the parallel market rates, so we will no longer be quoting Rates for the next 2 weeks. @MthuliNcube@ReserveBankZIM @edmnangagwa #MarketWatchZW

Market Watch Zimbabwe further said that after two weeks, they would have proved that they are not controlling the parallel market as they are merely researchers. They added:

After this period we feel we would have proved to the higher powers that we have no control and are simply “Market Watchers”. It all comes down to the people’s confidence in the new Zimbabwean dollar.

The team which is sceptical of the currency reforms has said that proper fiscal discipline can restore public confidence in the local currency. It added:

Can what the government is trying to do work? Yes it can. Will it work? We don’t know. With proper fiscal discipline going forward we do believe that confidence can be restored in Zimbabwe and our new Currency! 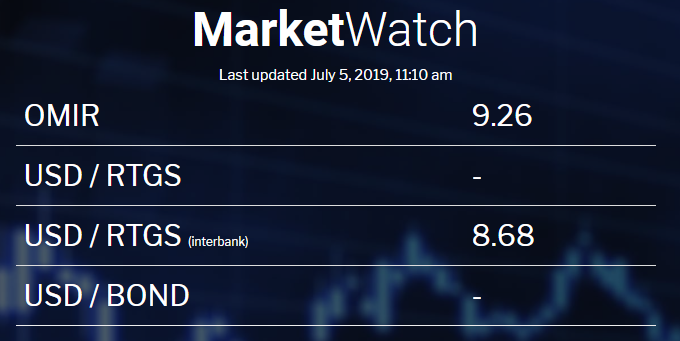 The under-fire outfit describes itself as an team of independent analysts whose primary focus is research into the Zimbabwean parallel markets as well as the stock market.

“We strive to bring you the most accurate rates in the market and our independence means we have no bias on these rates.

You need to make your business decisions and we strive to be your best source of information”.

In its declaimer it Market Watch says they do not deal in the parallel market nor do we quote on behalf of any other person or company.

“We are not traders and cannot be accountable for any decisions you make around our data. We are researchers only so please do not assume our information is accurate. Our information comes from various sources including social media as well as market informants on the street.”

“For official USD and RTGS rates please consult your banking partner or the Reserve bank of Zimbabwe. Please note it is illegal to deal on the parallel market and we strongly advise against it.”

“Our platform documents the rumoured parallel market that is mentioned on social media and various other sources.”