A Zimbabwe woman got married in hospital this weekend – days after her arm was bitten off in a crocodile attack near Victoria Falls, a newspaper reported on Sunday.

Zanele Ndlovu, a former national tennis player, married Jamie Fox on Saturday in a chapel at Bulawayo’s Mater Dei hospital where she was treated for her injuries, reports the Sunday News.

“This has never happened before and it is quite exciting. You can tell people are all excited about this,” a hospital staffer told the paper.

Lucky to be alive

Pictures from the chapel service show Ndlovu in a wedding dress, with the stump of her right arm in bandages. Her husband is pictured putting a ring on her left hand, which is also partially bandaged, and she is also seen signing a marriage certificate.

A short video clip from the ceremony shows the moment the groom kisses the bride.

Watch the video below:

Ndlovu and Fox were in an inflatable boat in the Zambezi River above the Victoria Falls when they were attacked by the crocodile last week.

“During the attack the crocodile gripped her arm and ripped it off while her partner made frantic efforts to save her. They are lucky to be alive though,” an unnamed family member told the paper.

Out of all animals, crocodiles were behind the biggest number of fatal attacks on humans in Zimbabwe last year, with 21 killed by the reptiles between January and December, according to a Chronicle report. 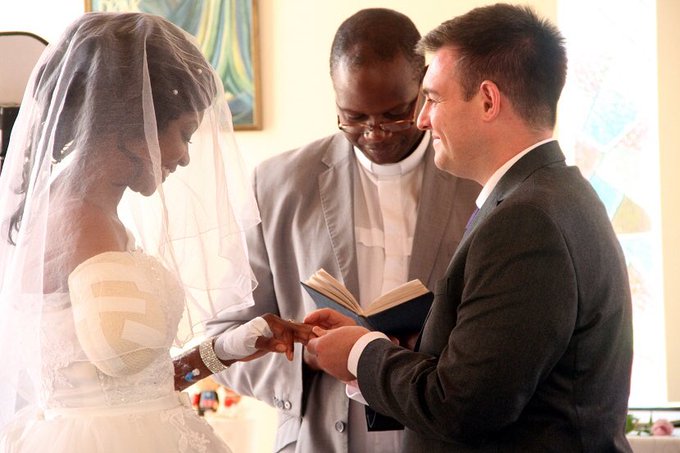 Zanele Ndlovu,a former tennis player was canoeing w her man at #VictoriaFalls,#Zimbabwe when a croc attacked them she lost her arm last week.She tied the knot while recovering at #Bulawayo Mater Dei Hospital.Quick recovery http://Mrs.Fox  & Congrats.

On New Year’s Eve a 90-year-old man was killed and another woman seriously injured when their inflatable boat was attacked by crocodiles in a dam at the Matopos National Park.