Catherine Zeta-Jones shared a rare photo of her family on Monday during their Christmas vacation in Zimbabwe, but some fans noticed a huge blunder with the post – someone is missing a leg!

In the snap, Catherine poses alongside her husband Michael Douglas and their two children Dylan and Carys, but in what appears to be a photoshop fail, Michael’s right leg is missing!

This didn’t go unnoticed but some of the actress’ followers, with many pointing out the huge error in the beautiful family snap. One said: “What happened with Michael’s right leg??? Only one leg he have?” another added: “Who’s the genius that photoshopped this works of art?” and a third commented: “Your hubs is missing a leg!”

Poor Michael appears to be missing a leg

The Welsh star didn’t appear to notice Michael’s missing leg when she uploaded the photo, which sees the family posing in front of elephants bathing in a large pool of water. Catherine captioned the image: “Greetings from Zimbabwe. Watching the ballet that is the elephants bathing. Beauty in nature nurtures the soul.”

Last week, Catherine and Michael’s children shared their excitement at being reunited for the holidays on social media. Dylan took to Instagram to share a sweet photo of him and his sister together having met up in Cape Town, South Africa, and wrote in the caption: “Best friends united!!”

Dylan had travelled to Cape Town where his little sister had already been staying, and she was just as thrilled to see him. On her own Instagram account, the budding model shared the same picture of herself and Dylan, and wrote: “My brother and best friend is here! How I’ve missed you!” 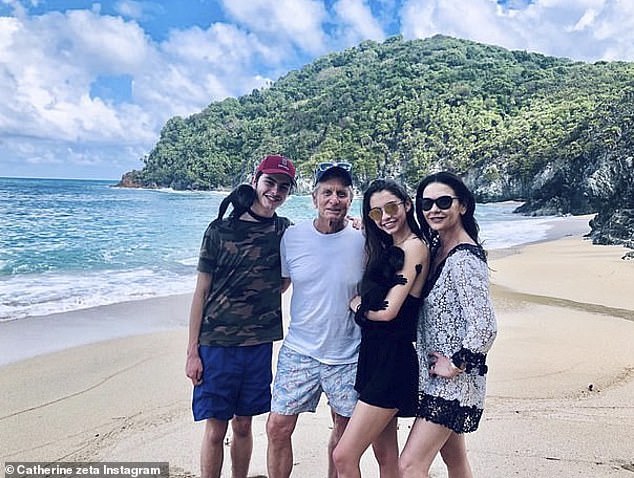