AP – Hour after hour in the dark, Chander Shekhar’s mind raced ahead to morning.

More than three months had dragged by since the coronavirus forced Shekhar to shut down his business — a narrow, second-floor shop racked with vibrantly colored saris, on a block in New York’s Jackson Heights neighborhood once thronged with South Asian immigrant shoppers. Today, finally, he and other merchants were allowed to reopen their doors.

But they were returning to an area where COVID-19 had killed hundreds, leaving sidewalks desolate and storefronts to gather dust. Now fears were fading. But no one knew what lay ahead on this late-June Monday as owners raised the gates at jewelry stores, tandoori restaurants and bridal shops clustered near Roosevelt Avenue’s elevated train line. Overnight, the stress had woken Shekhar nine times.

“You cannot tell everybody it’s safe to come and buy from us. This is an invisible enemy that nobody can see,” said Shekhar, a father of two anxious about the shop’s $6,000 monthly rent. “This is my baby,” he said, of the store, Shopno Fashion. “I have worked hard for this for more than 20 years, then I got my shop. It’s not easy to leave it.” 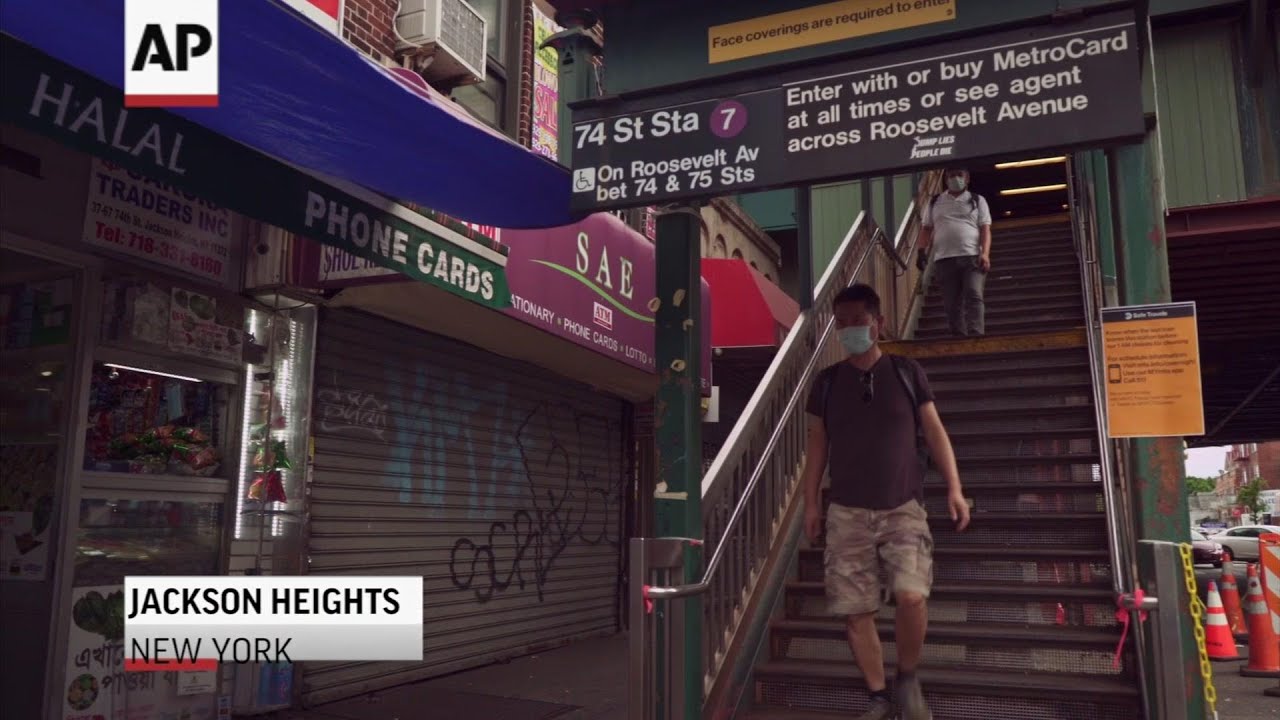 Amid the deaths of friends and customers, Shekhar is reluctant to complain. And he knows he is not alone. As economies around the world reopen, legions of small businesses that help define and sustain neighborhoods are struggling. The stakes for their survival are high: The U.N. estimates that businesses with fewer than 250 workers account for two-thirds of employment worldwide.

EDITOR’S NOTE — Small businesses around the world are fighting for survival amid the economic fallout from the coronavirus pandemic. Whether they make it will affect not just local economies but the fabric of communities. Associated Press journalists tell their stories in the series “Small Business Struggles.”

In New Orleans, the owner of a gallery and lounge that launched just before the pandemic hit reopened it as a takeout eatery, with himself as the lone employee. In Tokyo, a florist grabbed a lifeline from shut-in customers who bought blossoms to keep their spirits up. In Minneapolis, a dentist who refitted his office to protect patients from infection is starting over after it was destroyed in riots.

All acknowledge that reopening is just the beginning. But it is a critical milestone, nonetheless, a testament to their grit, creativity and no small amount of desperation. It’s about finding whatever works, because for now, there is no such thing as business as usual. 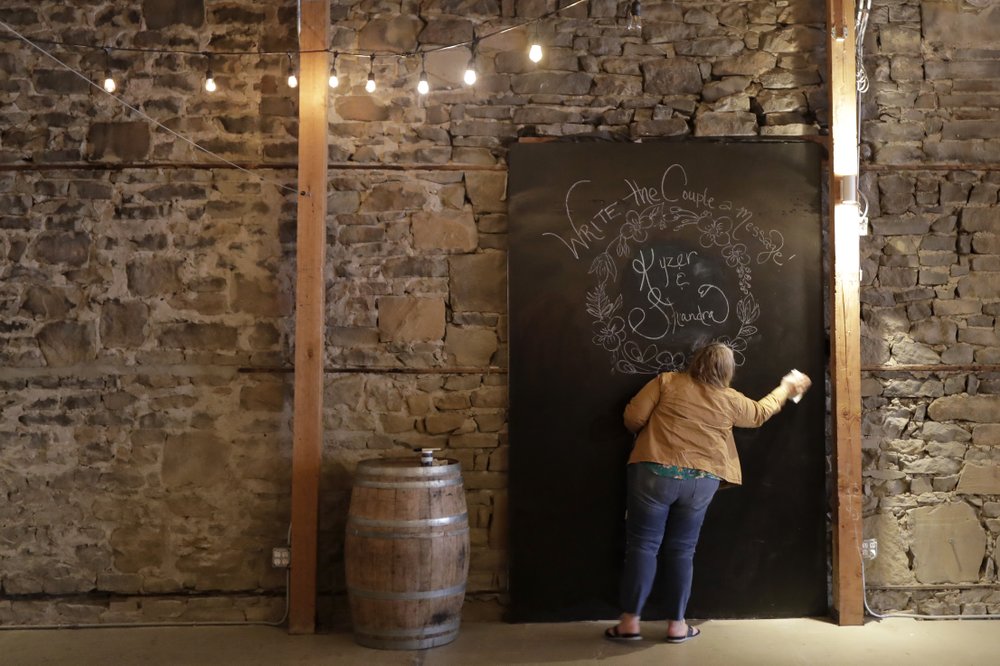 Stephanie Skoglund touches up paint on a giant chalk board where guests can leave messages for the bride and groom at The Vault, the wedding and event center she owns in Tenino, Wash. (AP Photo/Ted S. Warren)

Over the years, Stephanie Skoglund invested countless hours of sweat equity renovating what was once Tenino, Washington’s general store — replacing the floors, wiring chandeliers, adding a kitchen. Everything to upgrade the old sandstone building in this long-ago frontier town for use as a wedding hall.

With this year’s wedding season approaching, 40 celebrations were already on the calendar at The Vault and its sister facility. Then the coronavirus shut them down.

Skoglund turned off the electric circuits and water lines at both venues. She sold a dance floor for $1,000 and a large party tent for $2,600, to help cover her family’s bills. Her husband works for her business, so his income is gone, too.

Skoglund was approved for $3,200 of the nearly $25,000 she sought from the federal Payroll Protection Program before learning even that wouldn’t be coming. Then Washington state halted her unemployment payments as it scrambled to sort out hundreds of millions of dollars in fraudulent claims.

Reopening, if you can call it that, has proved just as tough. 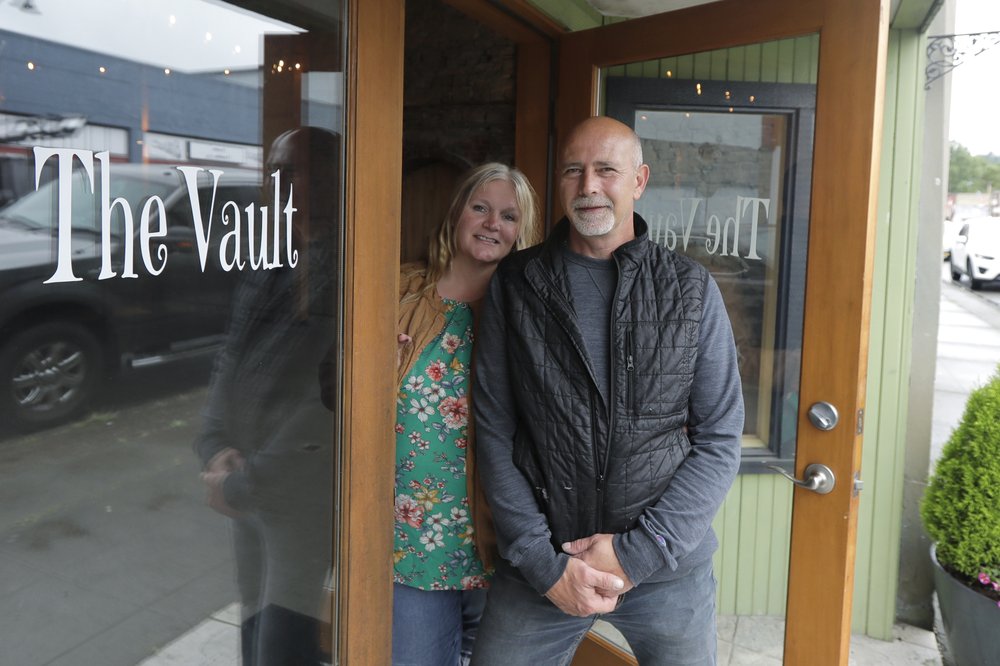 Stephanie Skoglund poses for a photo with her husband, Rick, in the main entrance to The Vault, the wedding and event center she owns in Tenino, Wash. (AP Photo/Ted S. Warren)

In June, Skoglund started getting calls from people looking to rent tables, chairs and tents for outdoor events, her only revenue so far. She’ll host her first wedding in late July, one of three events that remain on the calendar. The hall can seat 299, so with 80 guests expected social distancing rules should not be an issue.

Of 20 couples who had booked weddings through October, eight rescheduled for next year and a dozen canceled. Skoglund wrote letters to say she hopes to refund them eventually; it wouldn’t feel right to keep deposits, regardless of language in the contracts.

Once events restart, Skoglund’s older children, aged 16 to 25, will pitch in as her staff. She’s hoping business solidifies by October. But she and her husband have talked about selling their home and businesses and starting over, if it doesn’t.

“I have to start thinking about how to save what I do have and not put myself in a financial position where I lose it,” she said. “Just making that decision: what’s my next step? That’s what keeps me up at night.”

–By Gene Johnson in Tenino, Washington 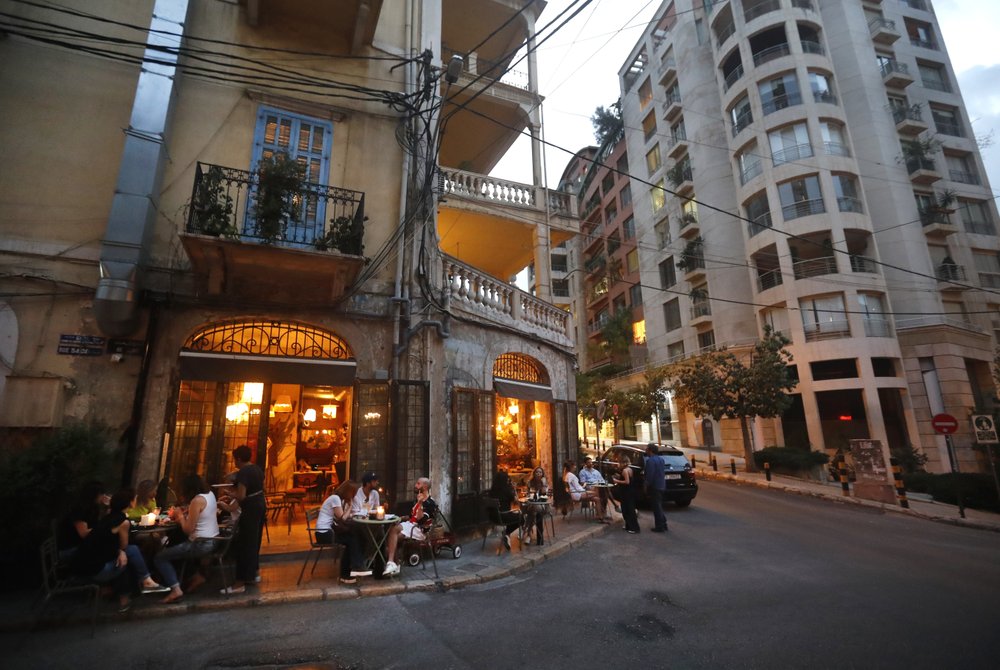 Customers have drinks on June 18, 2020, outside a restaurant owned by Walid Ataya, who also has a bakery, pizzeria, wine room and flower shop on a strategic intersection leading into one of Beirut’s upscale neighborhoods. (AP Photo/Hussein Malla)

After Beirut went into lockdown in March, Walid Ataya returned to his bakery, pizzeria and wine room each morning, perching on a stool at the sidewalk bar to maintain an outpost of commerce and consider his next moves.

Before the pandemic, Lebanon faced an economic crisis rooted in years of government mismanagement and corruption that had sparked nationwide protests. Ataya, who fled when Israel invaded in the mid-1980s, had no intention of leaving again.

“Over here in Lebanon, we can deal with crises,” said Ataya, whose Bread Republic presides over a busy intersection fronting the swanky Furn al-Hayek neighborhood. “We have been through wars and turmoil. … So the pandemic came and for us it is just another crisis to overcome.”

Bakeries were exempted from closure, so Ataya’s expanded beyond bread to sell fresh pasta. He also kept up a limited flower business, only delivering orders and selling bouquets at the bakery.

Ataya kept on 10 of his 40 employees, sending others home at half-pay. Eventually, he let 10 go, recalling the rest at full wages. He negotiated a rent reduction and cut ties with some suppliers when an 85 percent drop in the nation’s currency left many accepting only dollars. 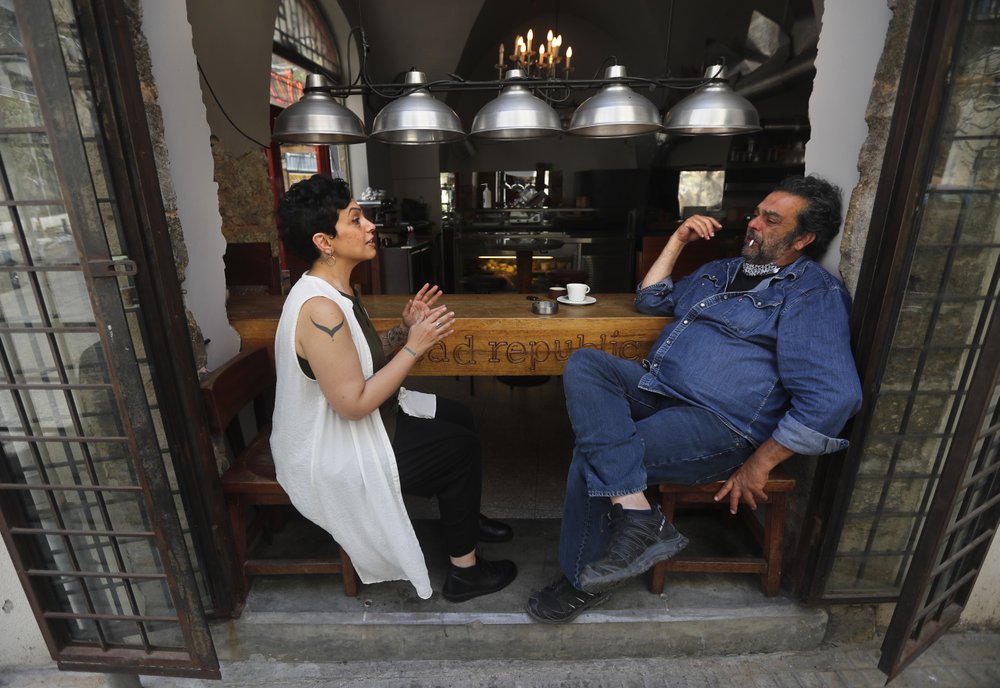 Walid Ataya, right, speaks with one of his employees at his Bread Republic shop on June 18, 2020. (AP Photo/Hussein Malla)

When rules were eased in May, he reopened the wine bar and pizzeria, albeit at 30 percent of capacity. At first, no one sat indoors and staff circulated among the tables, spraying disinfectant. Police still fined Ataya for overcrowding at his outdoor tables. He is contesting it in court.

Finally, in early June, restrictions were reduced enough for Ataya to reopen his restaurant across the street from the bakery and pizzeria. Protests had resumed and he had his hands full dealing with government paperwork. Then masked men broke into his office and carried out a safe holding thousands of dollars.

In recent days, though, customers filled the tables outside his businesses.

“We are in the stage of surviving day to day now,” Ataya said. “You cannot sit and do nothing. You have to take your chances.”

–By Sarah El Deeb in Beirut