EJERE, Ethiopia (AP) — Authorities in Ethiopia, China and Indonesia grounded all Boeing 737 Max 8 aircraft Monday following the crash of an Ethiopian Airlines jetliner that killed 157 people, and investigators found the flight recorders from the field where the plane went down.

The new plane crashed shortly after takeoff in clear weather outside Addis Ababa on Sunday, and the airline decided to ground its remaining four 737 Max 8s until further notice as “an extra safety precaution,” spokesman Asrat Begashaw said. Ethiopian Airlines had been using five of the planes and awaiting delivery of 25 more.

As Ethiopia observed a day of mourning, Red Cross workers slowly picked through the widely scattered debris near the blackened crash crater, looking for the remains of those aboard, while heavy machinery dug for larger pieces of the plane. 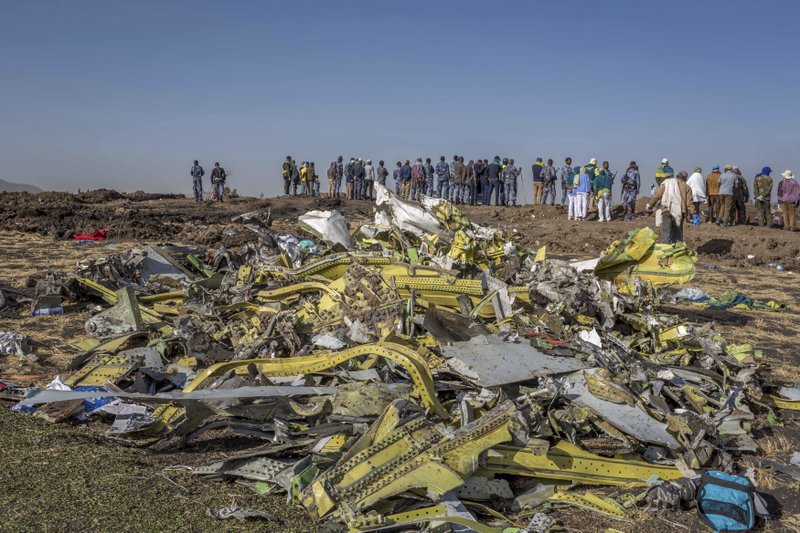 Wreckage is piled at the scene of the crashed Ethiopian Airlines flight. (AP Photo/Mulugeta Ayene)

The plane’s flight data and cockpit voice recorders were found, Ethiopian Airlines said. An airline official, however, said one of the recorders was partially damaged and “we will see what we can retrieve from it.” The official spoke on condition of anonymity for lack of authorization to speak to the media.

Ethiopian authorities are leading the investigation into the crash, assisted by the U.S., Kenya and others. 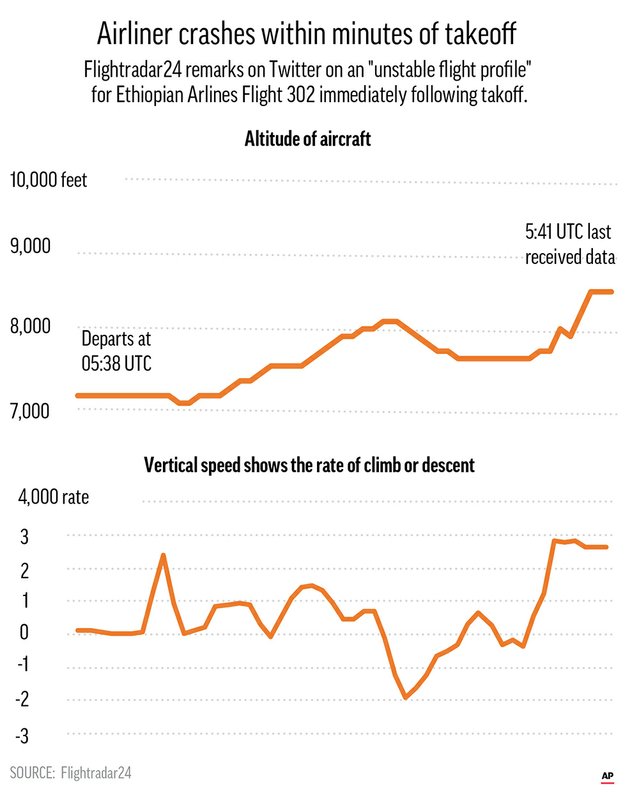 Sunday’s crash was strikingly similar to that of a Lion Air jet of the same Boeing model in Indonesian seas last year, killing 189 people. The crash was likely to renew questions about the 737 Max 8, the newest version of Boeing’s popular single-aisle airliner, which was first introduced in 1967 and has become the world’s most common passenger jet.

Safety experts cautioned against drawing too many comparisons between the two crashes until more is known about the disaster. Besides the groundings in China and Indonesia, Caribbean carrier Cayman Airways temporarily grounded their Max 8s.

People from 35 countries died in the crash six minutes after the plane took off from Ethiopia’s capital for Nairobi. Ethiopian Airlines said the senior pilot issued a distress call and was told to return but all contact was lost shortly afterward. The plane plowed into the ground at Hejere near Bishoftu, scattering debris like a shredded book, a battered passport and business cards in multiple languages. 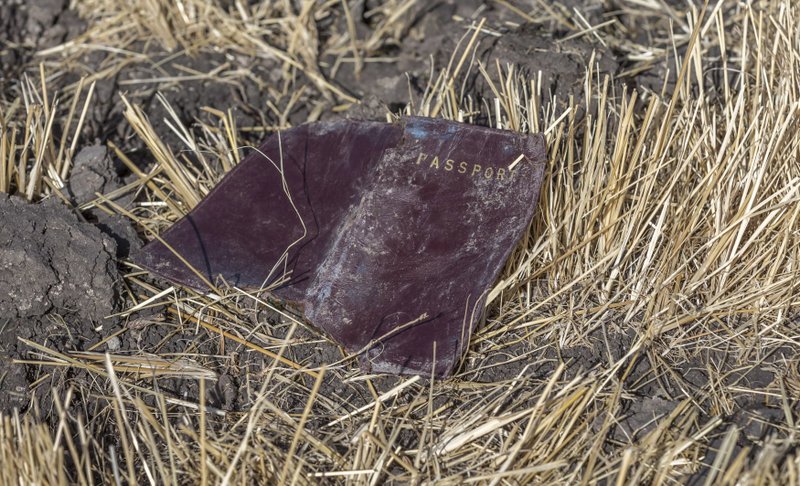 A passenger passport lies on the ground at the scene of an Ethiopian Airlines flight crash near Bishoftu, or Debre Zeit, south of Addis Ababa, Ethiopia, Monday, March 11, 2019. (AP Photo/Mulugeta Ayene)

“I heard this big noise,” resident Tsegaye Reta told the AP. “The villagers said that it was a plane crash, and we rushed to the site. There was a huge smoke that we couldn’t even see the plane. The parts of the plane were falling apart.”

Kenya lost 32 people, more than any country. Relatives of 25 of the victims had been contacted, Macharia said, and taking care of their welfare was of utmost importance.

“Some of them, as you know, they are very distressed,” he said. “They are in shock like we are. They are grieving.”

In Addis Ababa, members of an association of Ethiopian airline pilots cried uncontrollably for their dead colleagues. Framed photos of seven crew members sat in chairs at the front of a crowded room.

Leaders of the United Nations, the U.N. refugee agency and the World Food Program said colleagues had been on the plane. The U.N. migration agency estimated that 19 U.N.-affiliated employees were killed.

Both Addis Ababa and Nairobi are major hubs for humanitarian workers, and some had been on their way to a large U.N. environmental conference set to begin Monday in Nairobi. The U.N. flag at the event flew at half-staff.

The crash shattered more than two years of relative calm in African skies, where travel had long been chaotic. It also was a serious blow to the Ethiopian Airlines, which has expanded to become the continent’s largest and best-managed carrier and turned Addis Ababa into the gateway to Africa. 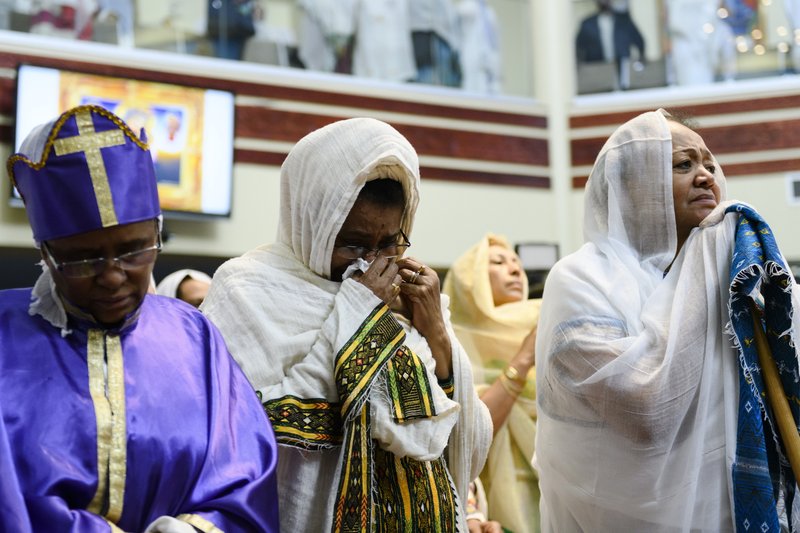 Members of the Ethiopian community take part in a special prayer for the victims of the Ethiopian Airlines flight ET302 crash, at the Ethiopian Orthodox Tewahedo Church of Canada Saint Mary Cathedral in Toronto, on Sunday, March 10, 2019. (Christopher Katsarov/The Canadian Press via AP)

The state-owned carrier has a good reputation and the company’s CEO told reporters no problems were seen before Sunday’s fight. But investigators also will look into the plane’s maintenance, which may have been an issue in the Lion Air crash.

The plane was delivered to Ethiopian Airlines in November. The jet’s last maintenance was on Feb. 4, and it had flown just 1,200 hours.

China’s Civil Aviation Administration said that it ordered airlines to ground all 737 Max 8 aircraft as of 6 p.m. (1000 GMT) Monday, in line with the principle of “zero tolerance for security risks.”

It said it would issue further notices after consulting with the U.S. Federal Aviation Administration and Boeing.

China Southern Airlines is one of Boeing’s biggest customers for the aircraft.

Chicago-based Boeing said it did not intend to issue any new guidance to its customers. It plans to send a technical team to the crash site to help Ethiopian and U.S. investigators, however, and issued a statement saying it was “deeply saddened to learn of the passing of the passengers and crew” on the Ethiopian Airlines Max airplane. 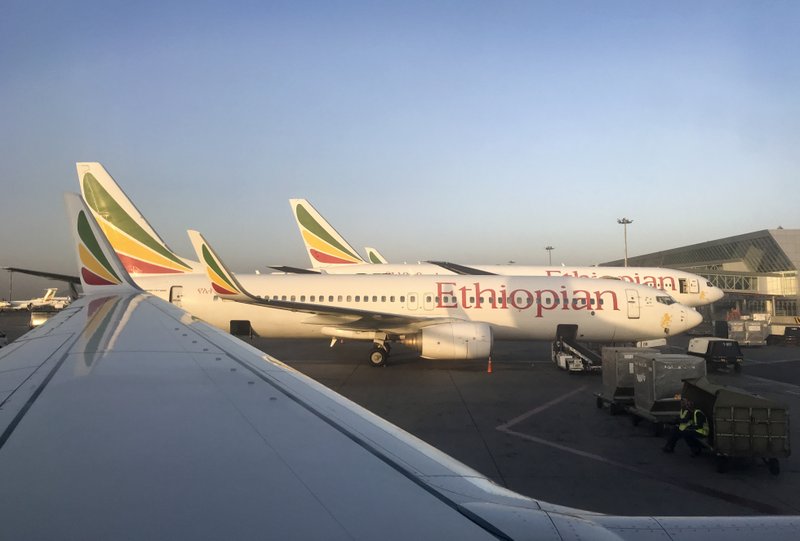 The 737 is the best-selling airliner in history, and the Max, the newest version of it with more fuel-efficient engines, is a central part of Boeing’s strategy to compete with European rival Airbus.

“Safety is our No. 1 priority and we are taking every measure to fully understand all aspects of this accident, working closely with the investigating team and all regulatory authorities involved,” the company said in a statement.