Marvelous Marvin Hagler stopped Thomas Hearns in a fight that lasted less than eight minutes yet was so epic that it still lives in boxing lore. Two years later he was so disgusted after losing a decision to Sugar Ray Leonard — stolen, he claimed, by the judges — that he never fought again.

One of the great middleweights in boxing history, Hagler died Saturday at the age of 66. His wife, Kay, announced his death on the Facebook page for Hagler’s fans.

“I am sorry to make a very sad announcement,” she wrote. “Today unfortunately my beloved husband Marvelous Marvin passed away unexpectedly at his home here in New Hampshire. Our family requests that you respect our privacy during this difficult time.”

Hagler fought on boxing’s biggest stages against its biggest names, as he, Leonard, Hearns and Roberto Duran dominated the middleweight classes during a golden time for boxing in the 1980s. Quiet with a brooding public persona, Hagler fought 67 times over 14 years as a pro out of Brockton, Massachusetts, finishing 62-3-2 with 52 knockouts.

“If they cut my bald head open, they will find one big boxing glove,” Hagler once said. “That’s all I am. I live it.” 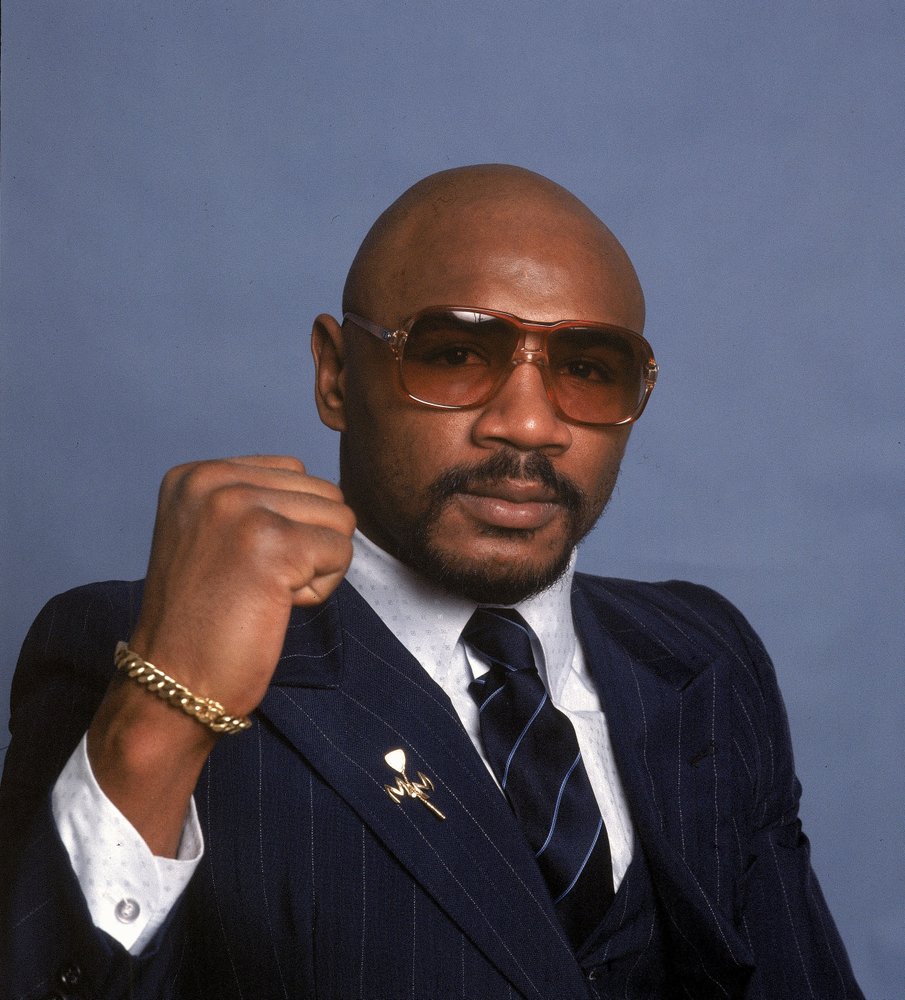 Hagler was unmistakable in the ring, fighting out of a southpaw stance with his bald head glistening in the lights. He was relentless and he was vicious, stopping opponent after opponent during an eight year run that began with a disputed draw against Vito Antuofermo in 1979 that he later avenged.

He fought with a proverbial chip on his shoulder, convinced that boxing fans and promoters alike didn’t give him his proper due. He was so upset that he wasn’t introduced before a 1982 fight by his nickname of Marvelous that he went to court to legally change his name.

Any doubts Hagler wasn’t indeed Marvelous were erased on a spring night in 1985. He and Hearns met in one of the era’s big middleweight clashes outdoors at Caesars Palace in Las Vegas and when the opening bell rang they traded punches for three minutes in an opening round many consider the best in boxing history.

Hagler would go on to stop Hearns in the third round, crumpling him to the canvas with a barrage of punches even as blood poured out of a large gash on his forehead that nearly caused the referee to stop the fight earlier in the round.

“When they stopped the fight to look at the cut, I realized they might be playing games and I wasn’t going to let them take the title away,″ Hagler said later. “It was a scary feeling. I thought, ‘Why are they stopping this fight?’ I didn’t realize I was bleeding. It wasn’t in my eyes. Then I knew I had to destroy this guy.”

Arum said Hagler simply willed himself to victory over Hearns, whose big right hand was feared in the division but couldn’t keep Hagler at bay. 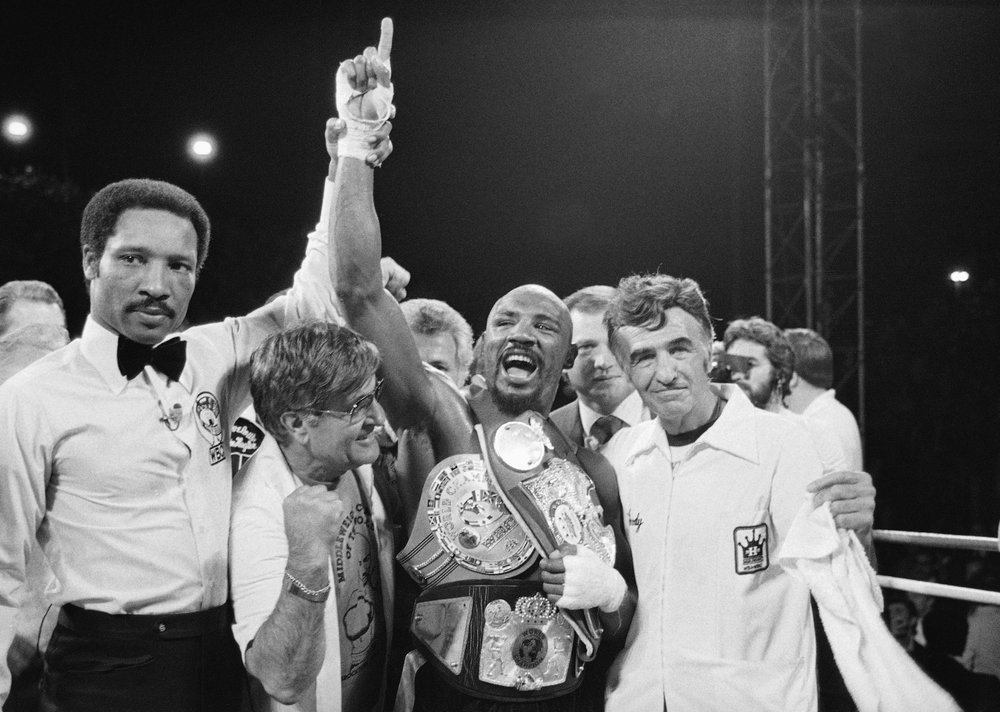 Hagler celebrates after knocking out Hearns in April 1985. (AP Photo)

“That was an unbelievable fight,” Arum said. “Probably the greatest fight ever.’’

Hearns said Saturday he was thinking about Hagler and their historic fight. Hagler wore a baseball cap with the word “War” while promoting it while on a 23-city tour with Hearns that Arum said made the fighters despise each other before they even entered the ring.

Hagler would fight only two more times, stopping John Mugabi a year later and then meeting Leonard, who was coming off a three-year layoff from a detached retina, in his final fight in 1987. Hagler was favored going into the fight and many thought he would destroy Leonard — but Leonard had other plans. 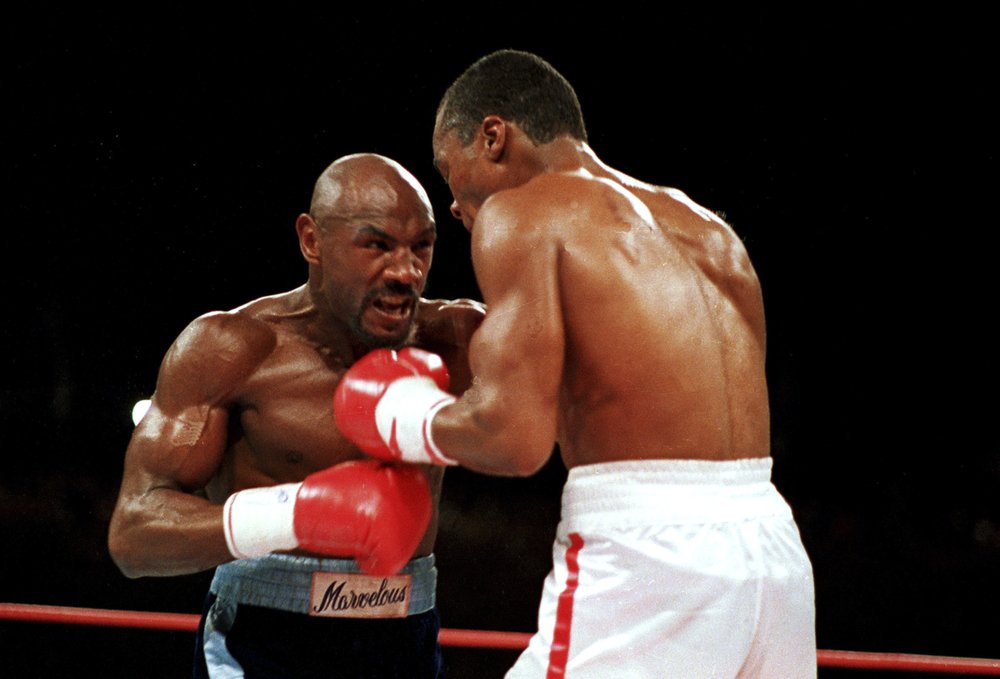 While Hagler pursued him around the ring, Leonard fought backing up, flicking out his left jab and throwing combinations that didn’t hurt Hagler but won him points on the ringside scorecards. Still, when the bell rang at the end of the 12th round, many thought Hagler had pulled out the fight — only to lose a controversial split decision.

Hagler, who was paid $19 million, left the ring in disgust and never fought again. He moved to Italy to act, and never really looked back.

“I feel fortunate to get out of the ring with my faculties and my health,” he said a year later.

Hagler took the long route to greatness, fighting mostly in the Boston area before finally getting his chance at the 160-pound title in 1979 against Antuofermo as a co-main event with Leonard fighting Wilfredo Benitez on the same card. Hagler bloodied Antuofermo and seemed to win the fight, but when the scorecards were tallied he was denied the belt with a draw.

Hagler would travel to London the next year to stop Alan Minter to win the title, and he held it for the next seven years before his disputed loss to Leonard.

Arum remembered being at a black tie event honoring top fighters a year later that was attended by both Hagler and Leonard, among others. He said Leonard came up to him and pointed to Hagler across the room and suggested he go talk to him about a rematch that would have earned both fighters unbelievable purses.

“I went over to Marvin and said Ray is talking about a rematch,” Arum said. “He glared at me as only Marvin could and said, `Tell Ray to get a life.’’’

Hagler was born in Newark, New Jersey, and moved with his family to Brockton in the late 1960s. He was discovered as an amateur by the Petronelli brothers, Goody and Pat, who ran a gym in Brockton and would go on to train Hagler for his entire pro career.