Mnangagwa met the three-team delegation of Baleka Mbethe, Sydney Mafamadi and Ngoako Ramatlhodi at State House during which he reportedly told them there was “no crisis in Zimbabwe.”

The main opposition MDC Alliance said Ramaphosa’s office contacted them last Saturday to prepare a five-person delegation to meet his envoys on Monday. In a statement announcing the Zimbabwe mission last week, Ramaphosa had said the delegation would “engage the government of Zimbabwe and relevant stakeholders to identify possible ways in which South Africa can assist Zimbabwe.”

The latest diplomatic activity follows a crackdown by security services which has seen striking nurses, journalists, opposition leaders and trade union leaders being arrested or abducted and tortured accused of plots to oust Mnangagwa’s regime.

The MDC says at least 30 of its members have gone into hiding after an intensification of raids on the homes of Mnangagwa’s rivals in the lead up to planned anti-government protests on July 31 which were crushed by the military and police.

“We can only assume the failure to meet the MDC Alliance delegation was a result of demands made by the Zanu PF delegation,” MDC Alliance spokesperson Fadzayi Mahere said in a statement.

“We reiterate that Zimbabwe is in a state of crisis that has been characterised by a de facto state of emergency, a crackdown on citizens, abductions, arbitrary arrests of government critics and persecution of journalists.

“The government in Harare is incapable of resolving these challenges because it lacks legitimacy.”

ZimLive understands at the end of the State House meeting, South Africa’s ambassador to Zimbabwe Mphakama Mbete – a brother to special envoy Baleka Mbete – called MDC Alliance officials and said the delegation would not be meeting them as they were returning to South Africa to brief Ramaphosa on the outcome of their meeting with Mnangagwa.

“It appears there was a stand-off at State House. The regime doesn’t want its propaganda of ‘no crisis in Zimbabwe’ contaminated with the truth of its brutal crackdown against citizens,” a senior MDC Alliance official said.

South Africa’s main opposition parties the Democratic Alliance and the Economic Freedom Fighters have leaned on President Ramaphosa to step in and resolve the Zimbabwe crisis. The EFF has threatened to force the closure of Zimbabwe’s embassy in Pretoria and also the border with Zimbabwe at Beitbridge until Mnangagwa makes concessions about respecting human rights.

“He urges the government of Zimbabwe to ensure the protection of all fundamental human rights, notably the freedom of opinion and expression and the right to freedom of peaceful assembly and association,” said a statement from Guterres’ office.

African Union Commission chairman Moussa Faki Mahamat has issued a rare rebuke of a member state after expressing concern at reports of the use of “disproportionate force” by Zimbabwe’s security forces in enforcing Covid-19 emergency measures.

“The chairperson is concerned about reports of disproportionate use of force by security forces in enforcing Covid-19 emergency measures. He implores the authorities to exercise restraint in their response to peaceful protests,” Mahamat’s office said.

During a Heroes’ Day address to the nation before his meeting with the envoys, Mnangagwa called criticism of human rights abuses by his government “divisive falsehoods” and said his administration was under renewed attack from domestic and foreign opponents.

“The divisive falsehoods and concoctions by renegades and supremacists who want to pounce on our natural resources will never win the day. Truth shall triumph over lies, and good over evil,” said Mnangagwa, who replaced Robert Mugabe after a 2017 coup. 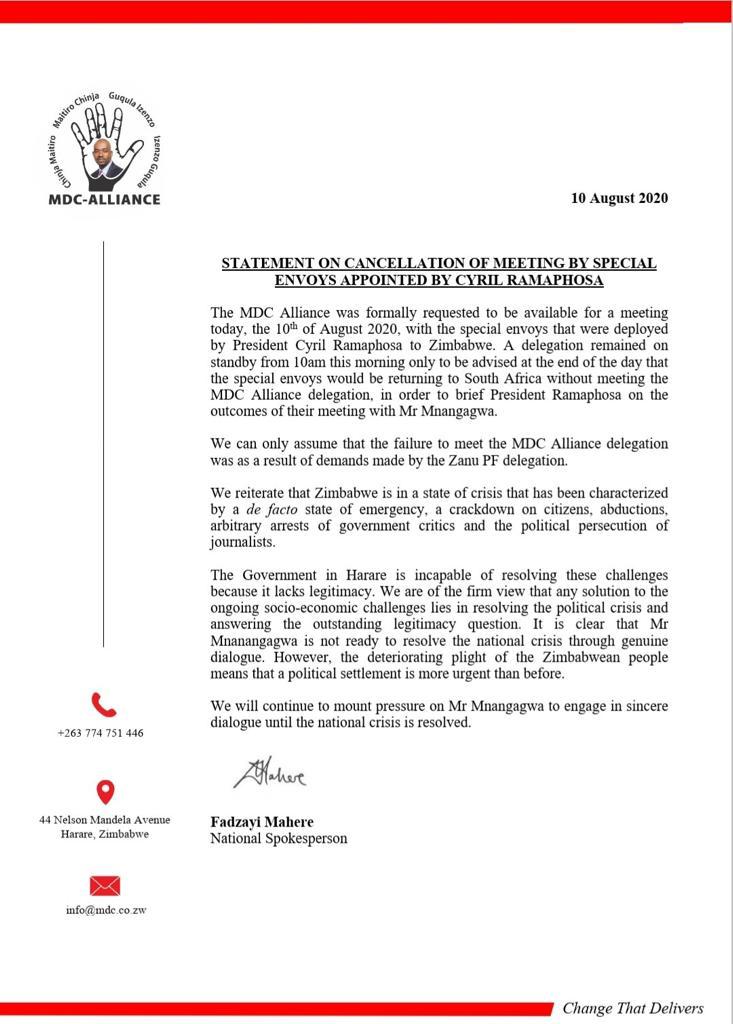