THE blistering sun scorches vast swathes of lush green land in the picturesque Mazowe Valley, 40 kilometres north of Harare, as the November heat takes a toll on the baked surface below.

It is mid-morning on a Tuesday and employees at plots surrounding Gushungo Dairy Estates are toiling in the fields under the searing heat; sweating like a sinner in church, while road construction workers take turns to dig trenches, pounding and cracking the earth.

Driving on the tarred road that leads to Alpha Omega Dairy, one sees a sea of poverty. It is evident from the small grass-thatched mud houses that most villagers are living in squalor.

The majority of them have — at one time or another — worked for the dairy company belonging to the late former president Robert Mugabe and his wife Grace, who once bestrode and dominated Zimbabwe’s political landscape like colossuses.

At one time Grace, whose family seized more than 20 farms during Mugabe’s reign — including the one where the dairy is built — once described her late husband and herself as farmers, who have installed a state-of-the-art plant at Gushungo Estate.

She claimed it was the second-biggest dairy in Southern Africa, capable of milking 64 cows at a time. She said the Mugabe owned a herd of more than 2 000 cattle.

Like a haunted island, Alpha Omega — loosely translated to mean the beginning and the end — is now derelict.

It is now a monument to failure.

If a name is anything to go by, it is apparent that the business came to a screeching halt with the end of Mugabe’s 37-year-rule in 2017 when his longtime ally, Emmerson Mnangagwa, ousted him in a military coup. 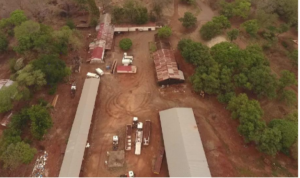 Before the coup, Alpha Omega benefitted from patronage as government departments and state institutions stampeded to order milk, yogurt and ice cream.

Some of Gushungo’s major buyers included the army, police, parastatals and government hospitals. The company, known for scooping prizes during the Zimbabwe International Trade Fair and Harare Agricultural Show, which were part of the Mugabe hero-worshipping cult, has become a pale shadow of its former self. Alpha Omega is a subsidiary of the former first family’s business empire, Gushungo Holdings.

During Mugabe’s time in power the company was touted as a model of success of the chaotic land reform programme in which Mugabe and his cronies seized white-owned commercial farms and associated businesses for self-aggrandisement in the name of correcting a historical injustice.
Most of the farms grabbed by Zanu PF leaders and their supporters are now largely unproductive and derelict.

Only a few are thriving.

However, the multi-million-dollar business has fallen on hard times and cannot compete with other dairy companies on the market.

In fact, it now resembles a ghost factory that stands as an ominous power symbol capturing the imaginations and ambitions of the Mugabe family.

Upon arrival, we find the parking lot empty, with only one delivery truck in sight. There is skeletal staff on the premises lingering around.

The yesteryear hive of activity is gone and workers’ crestfallen faces tell a story. The milk-manufacturing plant has gone mute, while the sales department that used to welcome hundreds of clients daily looks deserted.

“Not much production happens here anymore,” one of the employees says.

When The NewsHawks team, posing as clients, enquired about products like the Appertina yogurt and Alpha Omega ice cream, they were met with evasive and unclear answers as to when the dairy products would become available.

An order of five cartons of Appertina yogurt would only be available for dispatch by Monday the following week.

Most of Alpha Omega’s products have disappeared from the shelves of major retail outlets around the country as the multi-million-dollar business empire faces viability challenges.

A half-empty refrigerator in the sales area contained only the Mnandi brand of sour milk. Other products like fruit juices and ice cream were out of stock.

“Yogurts will only be available next Monday. We only made one delivery this week,” an employee said.

The NewsHawks also spoke to a security guard, who said delivery trucks have not been dispatching products daily due to a scarcity of raw materials.

“Business has been very low, we only have one delivery truck going out weekly, but the fresh milk business is still going well.

“We have customers from time to time,” the guard said.

The downturn in the company’s fortunes—just like the rest of the economy—has resulted in employees, including shopfloor workers like guards and milkers, leaving in droves.

Most of the workers believe Grace, Mugabe’s widow, has abandoned the dairy project. The Mugabe family hardly visits the farm anymore, workers said.

Grace has actually been out of the country since before the Covid-19 lockdown early this year. Production at Gushungo Farm, which supplies critical raw materials for the dairy estate, has declined over the years, villagers around also testified.

“The cattle have no food, so you cannot expect miracles at Alpha Omega,” another Gushungo Dairy employee said.

Gamuchirai Mapako, a former worker, said she decided to quit last year after a series of unpaid salary payments.

She has had to turn to vending to eke out a living.

“Before I quit, I used to earn $190. That money could not get me through the week and I hear that things are still bad,” Mapako, a former security guard, said.

Another worker, who is selling kitchen wares for a living, told The NewsHawks that the company was struggling to pay salaries.

“I earn $1 200 and the money always comes a month after the normal pay date. It used to be better when Amai (Grace) used to frequent this place.”

Grace is reportedly staying in Singapore, while her business empire crumbles.

“This project needs someone to really focus their energy on it. A lot needs to be revived at the farm.

There is no way the cattle will get enough to eat without production at the farm. For the process to be complete, more attention needs to be put at the farm,” a worker at Gushungo dairy, Mary Mupasiri, said.
Gushungo Farm has also been affected by the frequent breakdown of boreholes and lack of pasture for the dairy cows. At Gushungo Butchery, a security guard offered to buy meat on credit for The NewsHawks team in exchange for US dollars.

His young family is struggling to survive, he says.

“Just give me your dollars and I will get meat on credit, but you will not get a receipt,” he said.
The butchery could be mistaken for a dumpsite, with old farm equipment that includes tractors, trucks and combine harvesters strewn all over the yard. Our news crew also visited Amai Mugabe High School, an upmarket educational institution nestled in the Mazowe Valley which looked almost deserted.

Only a few students from the examination classes could be seen in the corridors of the school, a result of Covid-19 and dereliction.

A staffer seemed animated as he took the team on a school tour. The state-of-the-art furniture, lecture rooms, laboratories and dormitories look deserted as only a handful of students go about their daily learning routine.

Amai Mugabe School used to attract children of top Zanu PF politicians and civil servants. It was highly regarded. There were reports that senior government officials were cajoled into enrolling their children at the school.

Some of them did as instructed, feigning support and to curry favour with the Mugabes. But many parents have withdrawn their children from the school since Mugabe’s fall.

The tuition fee, although still expensive, has been cut in the past year to attract students. Students are required to pay US$2 985 per term for boys, while girls pay US$2 945.

The multi-million-dollar Gushungo Holdings, which used to be touted as a model of success of the controversial land reform programme despite reeling under a US$20 million debt, is now a ghost project—it is dying with the decline of the Mugabe political dynasty.