FORMER Zimbabwe Vice President Phelekezela Mphoko has been handed over to Zimbabwe by the Botswana government and is now in custody of the Zimbabwe Defence Forces, it has been revealed this evening.

Ousted Zanu-PF politician and apparent G40 leader, Professor Jonathan Moyo tweeted this evening that Mphoko is currently being held by the military, and questioned why he had been assured of freedom given the development.

Moyo says that he was informed of the arrest by “impeccable sources”. 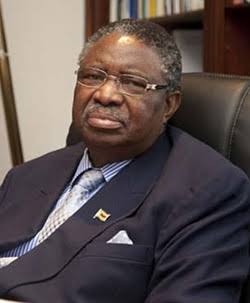 Impeccable sources in Plumtree say that the Botswana Immigration authorities have today handed over former VP Phelekezela Mphoko to the Zimbabwe Defence Forces who are said to be holding him. Why this is happening after assurances that he was free to return is mind boggling!

Mphoko had been advised by the new Zimbabwe government that he was free to return home.

Mphoko was in Japan when the military took over the government in what they term Operation Restore Legacy. Instead of returning to Zimbabwe directly, Mphoko proceeded to Botswana where he has business interests. The Botswana government, however, is reported to have ordered him to leave their country by the 1st of December.