Harare, – When Zanu PF, the party of Zimbabwean president, Emmerson Mnangagwa sent out a text message campaign to thousands of people last week it was probably not expecting to set off an uproar about invasion of citizens’ data privacy. But that is just what is has managed to do and also been accused of manipulating the voter roll.

Mnangagwa and the main opposition leader, Nelson Chamisa are caught up in an intense battle ahead of presidential, parliamentary and local government polls on July 30 this year. It is the first election in Zimbabwe’s 38-year history without former president Robert Mugabe on the ballot and a lot of the debates are being played out on social media.

This is perhaps why Zimbabweans have been quick to raise serious concerns about a targeted bulk messaged from the ruling party. The key issue is it is unclear how Zanu PF obtained phone numbers but opposition leader Chamisa has claimed his rivals did so illegally. 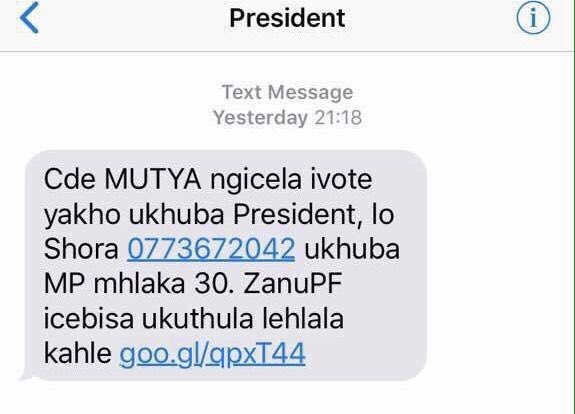 Zanu PF has been caught with its hands in the cookie jar. There is no legal way for any political party to access voter phone numbers. A govt that does illegal things can’t deliver prosperity and happiness. Join me tomorrow July 11 as we demonstrate against ZEC. We will prevail.

The Zimbabwe Electoral Commission was accused of giving away private citizens’ information to Zanu PF but the electoral body has been quick to refute the allegation and appeared to shift the blame on to mobile companies.

Added to the general concern is the fact Zimbabwe used a biometric system for voter registration early this year and in the process collected private information such as mobile numbers, photos and locations of the 5.6 million registered Zimbabwean voters.

But the telcos have also said they are not part of this, with Econet Wireless, the largest telco, distancing itself from this after explaining that it “holds customer and client data in the strictest of confidence, in line with the requirements of the law”.

Mnangagwa has been campaigning via WhatsApp to reach out to followers through broadcasts, probably seeking to capitalize on stats WhatsApp accounts for nearly half of all internet traffic in Zimbabwe. Chamisa has also maintained a heavy presence on Twitter and Facebook. The communications regulator said this week internet subscribers in Zimbabwe rose for the first quarter by 3.6% to 7.2 million compared to the first quarter 2017, with mobile data accounting for 98% of this.