HARARE – The Reserve Bank of Zimbabwe (RBZ) says an investigation into allegations of “corrupt activities and illicit currency dealings” against four directors who were suspended in October has not turned up any evidence.

Mirirai Chiremba, Norman Mataruka, Gresham Muradzikwa and Azvinandawa Saburi were suspended after political activist William Gerald Mutumanje claimed in a Facebook Live broadcast that they were part of a “cartel” responsible for criminal activities ranging from printing off-the-books bond notes to the corrupt allocation of foreign currency.

He claimed the quartet were also aiding a fuel cartel headed by a “Queen Bee” – later revealed by Mutumanje to be a reference to Sakunda boss, Kudakwashe Tagwirei.

Chiremba, the RBZ’s director in charge of Financial Intelligence, was arrested last week accused of approving an upward review of the foreign currency withdrawal limit of a gold dealer without following procedures. That arrest was unconnected to the Mutumanje allegations.

In a statement dated December 10, but only circulated on Thursday, RBZ governor John Mangudya said the four had been “absolved of any wrongdoing”.

“The central bank and the law enforcement agents carried out an investigation which on conclusion have revealed that Messrs Chiremba, Mataruka, Muradzikwa and Saburi were not involved in the corrupt activities or any impropriety as alleged by Mutumanje. The RBZ would thus like to advise the public that the quartet has been accordingly absolved of any wrongdoing,” Mangudya said.

Mutumanje, who later tried to reach out to Tagwirei, was recorded by one of Tagwirei’s associates admitting to being paid $40,000 through the facilitation of Christopher Mutsvangwa, a former adviser to President Emmerson Mnangagwa, to smear the RBZ directors and the powerful Sakunda boss. 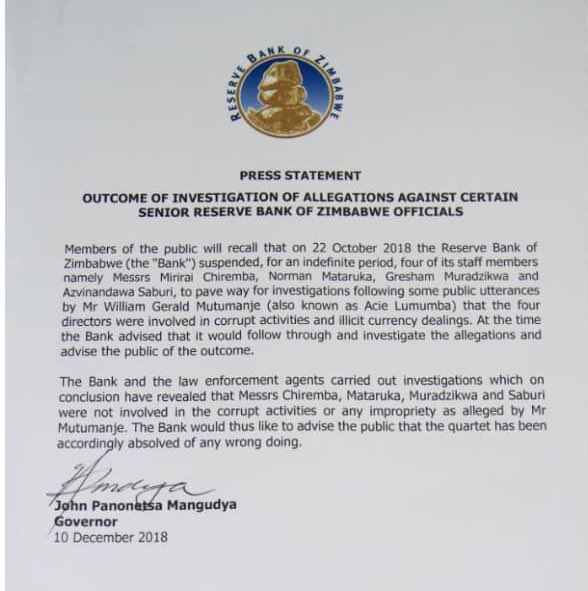