MDC-T led by Senator Douglas Mwonzora has dismissed the Zimbabwe 2021 Agenda, a statement by the leader of rival MDC Alliance Nelson Chamisa, as hollow and full of empty rhetoric.

Chamisa had announced his Zimbabwe 2021 Agenda in which he articulated issues bedevilling Zimbabwe and also proffered possible solutions.

The youthful leader also took a swipe at other opposition leaders which he accused of being ZANU PF vassals. In response, MDC-T said:

The MDC T notes with concern the statements uttered by Nelson Chamisa in his Agenda 2021 virtual address yesterday. Although, as we had expected the statement was hollow and full of empty rhetoric, it is the toxicity and the utter divisiveness of the statements that must not go unchallenged.

He was so condescending towards other political parties. arrogantly referring to them as “little boys and girls’ and describing them as ‘surrogates of Zanu PF’. This is so unhelpful and tragic as it has become the hallmark of the political approach of Mr Chamisa and his grouping. Mr Chamisa wants to label anyone who disagrees with him as Zanu PF. Yet it is his political outfit that has more Zanu PF members outside Zanu PF itself. It is a matter of historical record that Mr Chamisa has within his ranks officials who at the behest of Zanu PF split the opposition at very crucial moments thus denying it electoral victory. There are people within his party who have had business dealings with Zanu PF including the late Mugabe’s Gushungo Dairy. More recently it is Mr Chamisa’s party that had a record number of officials defecting to Zanu PF.

In his address, Mr. Chamisa literary said nothing about uniting Zimbabweans across the political and regional divide. This is not surprising given the fact that as Mr Chamisa was giving his speech, his deputy president was busy ethnically abusing the people of Chipinge in Manicaland. His erstwhile colleague. Pedzisayi Ruhanya has been tribally abusing political opponents from Manicaland on twitter with reckless abandon. Not surprisingly, Mr Chamisa has not found it necessary to censure his wayward officials.

Mr Chamisa wants to blame other people for the consequences of his unconstitutional actions when he tried to usurp power following the death of Dr Morgan Tsvangirai. He ought to have known that it would one day catch up with him. The whole of last year Mr Chamisa brought dead case after dead case against the MDCT. This includes the case relating to the possession of the Morgan Tsvangirai House. He wants to explain away his losses by alleging the hand of Zanu PF. That Mr Chamisa has a great handicap when it comes to matters of political strategy is there for all to see.

What is worrisome is that while Mr Chamisa decries the “de facto one party state’ that Zanu PF wants to bring, he nevertheless wants to create a “one party state’ within the opposition. Our President Douglas Togaraseyi Mwonzora has correctly stated that this is the time to jettison the politics of rancour, hate. acrimony, violence and intolerance and substitute same with the politics of rational disputation and tolerance.
What has since become clear is that Mr Chamisa cannot unite the people of Zimbabwe as much as he cannot unite his own party. 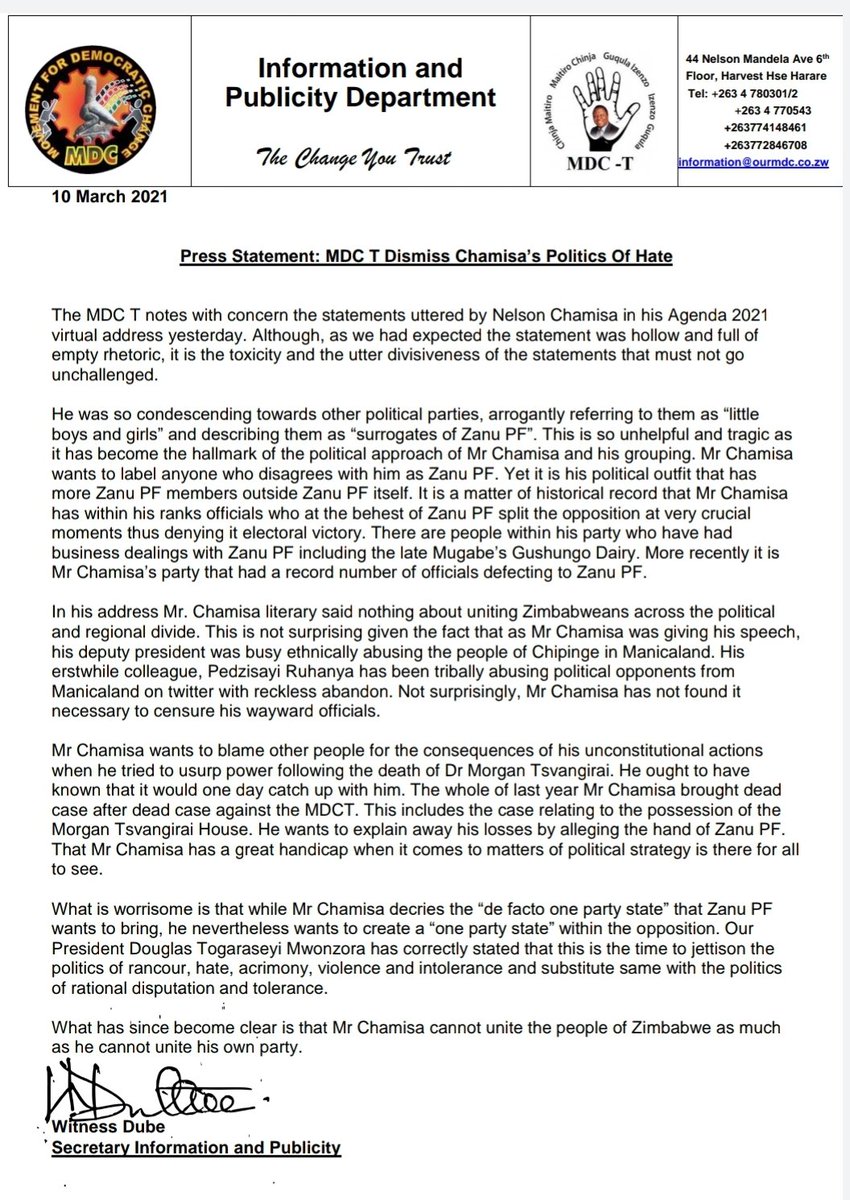