HARARE, Zimbabwe—The man who deposed longtime President Robert Mugabe is literally wearing his campaign promises on his sleeve six weeks before a historic election: Fight corruption, develop the economy, re-engage with the rest of the world and create jobs.

Emmerson Mnangagwa’s colorful blazer, which also bears his portrait below the shoulder, resembles a model worn by Mr. Mugabe, the man he served for 37 years before ousting him in a military intervention in November.

The question is whether Zimbabweans believe their new leader’s message of change. After more than a decade and a half of broad sanctions, Mr. Mnangagwa has pledged to stem a crippling economic crisis by inviting foreign investors and restarting aid talks with international financial institutions.

“We don’t believe we’re an island anymore,” he said in an interview at his office in downtown Harare. “We should be part of the global community.”

The success of the July 30 vote will dictate the post-Mugabe economic project and Zimbabwe’s efforts to end its status as an international pariah. Foreign governments, including the U.S. and the European Union, have made a credible and peaceful election a condition for reassessing sanctions, support programs and debt relief. Most private investors looking at Zimbabwe’s platinum, diamond and lithium reserves and infrastructure projects also expect the government to sort out its finances before they commit money.

“We want our elections to be free, fair, transparent and credible,” said Mr. Mnangagwa, repeating what has become a mantra for his ZANU-PF party.

The 75-year-old has been accused of having a hand in manipulating presidential polls in 2008, when the opposition Movement of Democratic Change won the first round but lost following a violent runoff campaign.

Mr. Mnangagwa has denied rigging that vote and other disputed elections, although he appeared to come close to conceding that previous polls haven’t always been free and fair.

“The question of free elections, now, I have said in the past we did not allow,” he said, before launching into another, newly familiar phrase: Let “bygones be bygones.”

On Harare’s potholed streets, Zimbabweans are seeing some changes. Many openly criticize the performance of the Old Man, as Mr. Mugabe is known, and that of Mr. Mnangagwa and say they will vote for his rival, the MDC’s Nelson Chamisa. Last week, thousands joined an opposition march through the capital, without interruption from security forces or ZANU-PF youth.

Other things have remained the same. Mr. Mnangagwa’s face is the only one decorating buildings and billboards. State media still laud the government and ridicule the 40-year-old Mr. Chamisa, a lawmaker and former information minister who took the helm of the MDC after the death of Morgan Tsvangirai in February, as an inexperienced upstart. Election watchdogs warn of the risk of vote-buying and other, softer manipulation of the impending polls. The government in May authorized wage increases for civil servants of up to 17%, bloating a public payroll that already eats up 90% of state revenue.

He also insisted he would respect the election result and rejected threats from members of his own cabinet that the military could intervene again. “The army is in the barracks,” he said. “If any other party wins, we will support them as they will support me if I win.”

A victory for Mr. Mnangagwa isn’t certain. A recent opinion poll showed 42% of voters would cast their ballot for him, compared with 31% for Mr. Chamisa, but 26% either declined to reveal their pick or said they hadn’t decided. Six out of 10 Zimbabweans feel that their country is going in the wrong direction, according to the same poll.

It is easy to see why. In the mornings, people line up front of banks, hoping to withdraw increasingly rare U.S. dollars—the country’s dominant currency since 2009—or government-printed “bond notes,” an alternative means of exchange launched in 2016. On the black market, Zimbabweans who need cash pay $165 from their bank accounts for a $100 bill. Many parents struggle to pay their children’s school fees.

Mr. Mnangagwa said he needs more time to remake a state and party machinery hampered by bureaucracy and corruption and plans to shuffle his cabinet after the elections.

“It’s not an event, it’s a process to change from one entrenched system to a new administration,” he said. “You need to carry the majority of the nation with you. It’s not possible to just go with a couple of friends and say this is where we are.”

The challenges are enormous. To qualify for aid from the International Monetary Fund, the African Development Bank or the World Bank, Zimbabwe has to pay off more than $2.3 billion in overdue loans and unpaid interest. It will also have to cut back a deficit that touched 14% of gross domestic product last year. And it will have to launch a new currency.

Mr. Mnangagwa gave few details on how he plans to resolve these issues. The central bank’s governor, John Mangudya, in an interview at his gated mansion outside Harare, said the government might borrow money from commercial banks to pay off some of the arrears and unlock assistance from development banks for the rest. But, he said, that solution could leave the country more indebted and still unable to access international financial markets.

Another option is to request debt relief.

“Maybe, after the elections are free, fair and credible, and we have more friends…we can ask them, look, we owe the World Bank, can you assist us?” Mr. Mangudya said. If there are doubts over the election, he said, Zimbabwe will be on its own. “If we have no friends, we have no choice.” 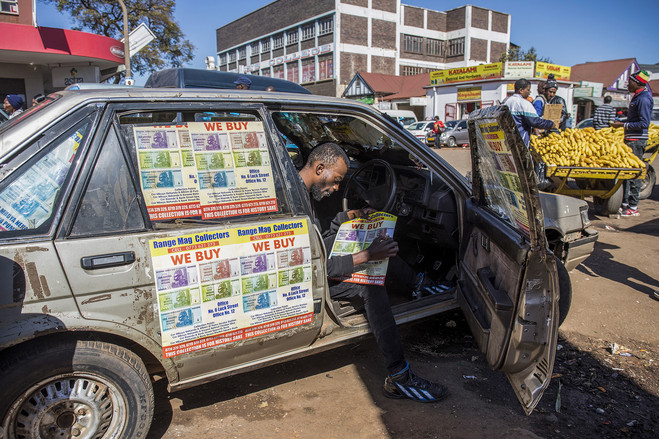 Challenge Chinake prices old Zimbabwe dollar notes for a poster advertising the informal purchase of the notes, which were abandoned in 2009 amid record hyperinflation. Photo: Cynthia R. Matonhodze for The Wall Street Journal

Write to Gabriele Steinhauser at gabriele.steinhauser@wsj.com