Moyo also released a document he said is part of the minutes of a meeting held between Chiwenga and former president Robert Mugabe during the military takeover that resulted in Mugabe’s resignation. Below are Chiwenga’s talking points for

The Party to afford every Party member a fair and equal chance of being heard or elected and the whole democratic process to be observed from the cell up and no imposition of candidates.

Cease all purging in the Party and Government and reunite the Party by reinstating all previous victims.

Implement the recommendations of the War Veterans Indaba and reintegrate all war veterans into the mainstream of the Party and Government.

The known counterrevolutionary elements who have foment the current instability in the Party be weeded out both in the Party and Government.

Security of tenure of employment as it relates to the provision of the current Constitution of Zimbabwe. 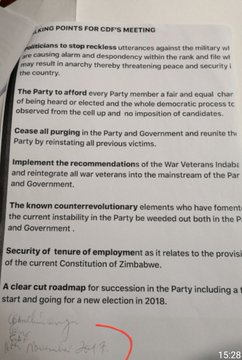 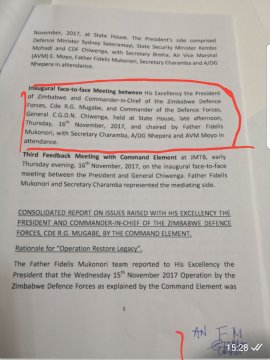 So in his so-called “inaugural face-to-face meeting” with President Mugabe during the #Coup on 16 Nov 2017, General #Chiwenga took a one-page with 7 “Talking Points” (REASONS FOR THE #COUP) 6 were about #ZanuPF factional politics & one about his security of tenure as #CDF. Shame!