HARARE – Presidential Spokesperson Office of the President and Cabinet, George Charamba, has reportedly revealed in a press statement that Vice President, Constantino Chiwenga has left South Africa for China where he is to undergo “thorough medical tests”. Below we present the purported press statement.

Following last week’s Presidential statement on Vice President CGDN Chiwenga’s health and recovery status, the Office of the President and Cabinet wishes to inform the Nation that the Vice President this week left for the People’s Republic of China where he is set to undergo further medical tests.

His relocation to China, which builds on the satisfactory recovery progress he has been making, follows weekend discussions at the highest level between Governments of Zimbabwe and China, at which a decision was taken to allow Chinese medical experts to join their expert counterparts from Zimbabwe, South Africa and India in attending to the Vice President.

The Office will keep the Nation updated on the progress the Vice President continues to make towards full recovery.

George Charamba Presidential Spokesperson Office of the President and Cabinet. 22/07/19 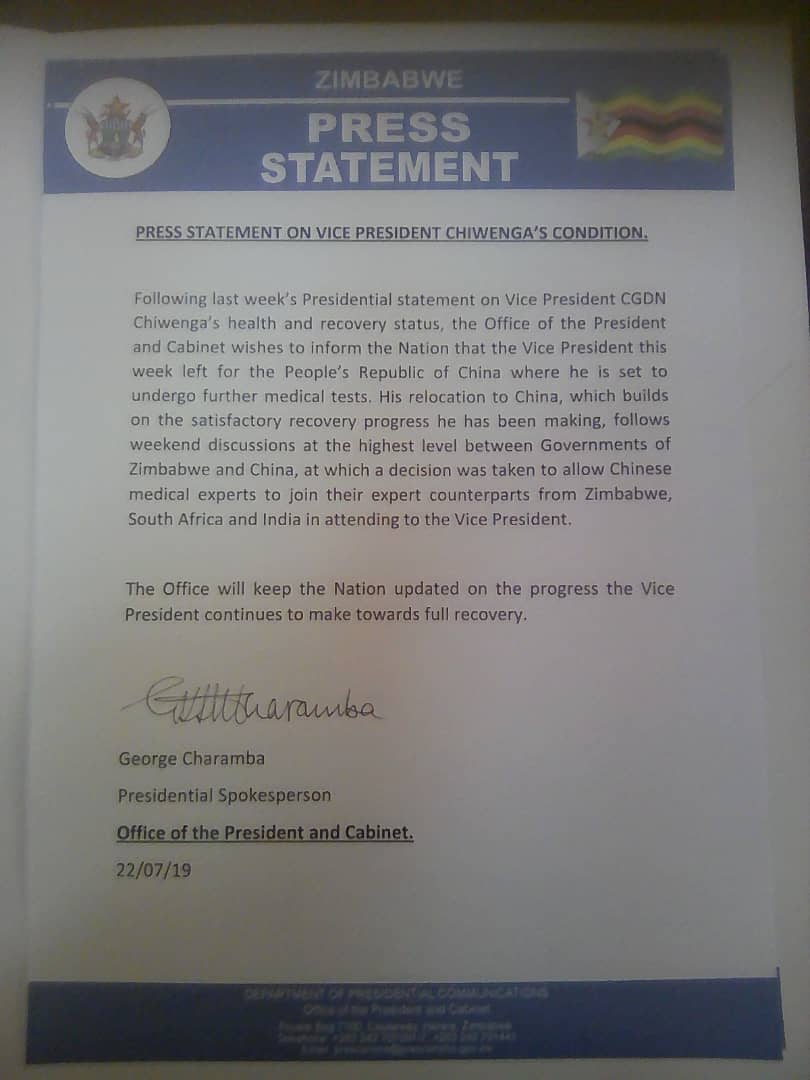 Vice President Constantino Chiwenga has already revealed that he suffered a serious illness during last the 2017 coup, denying charges of skin bleaching by the likes of former higher education minister Professor Jonathan Moyo.

Chiwenga opened up on the social media speculation.

The exiled Moyo – bitter critic of the former defence forces chief – had mocked Chiwenga over the change in his complexion since the military revolt which ousted former president Robert Mugabe last year.

Commenting on twitter, Moyo said the lightening of Chiwenga’s skin was “intriguing”, adding that the “bleachy (VP) was making at least two life-threatening emergency visits to a week to Harare’s Trauma Centre”.

Noting that there was “Trouble in the Coup Government”, Moyo claimed co-VP Kembo Mohadi was hospitalised in South Africa while president Emmerson Mnangagwa – also allegedly poisoned ahead of the coup – had told the “Chinese he won’t see signed projects take-off as he fears for his life and future”.

Chiwenga confirmed he has been struggling with his health while dismissing the skin bleaching allegations.

“Today we want to set the record straight on one issue now that journalists are here,” the VP told mourners at his sister’s burial.

“When we did our operation to normalise things in the country, I was with (new defence force chief) General (Philip Valerio) Sibanda and many others, they are brave men indeed.

“It was during that time that I fell ill. I had this skin sickness (nhuta) that affected my whole body from beneath my feet to my back and the journalists started saying I was using skin lightening creams, but that was not the case. I was sick.”