Sen. Jeff Flake (R-AZ) is in Zimbabwe to observe the country’s first elections after the ouster of tyrant Robert Mugabe last year — and though the opposition claims the vote count was rigged, and the army has killed six protesters, Flake has blessed the result.

“It’s time for a new era of peace and prosperity,” Flake tweeted on Thursday, a day after the protesters were killed demonstrating against what the opposition alleges is fraud by the ruling party.

All parties in Zimbabwe need to call for calm as election results are announced. The people of Zimbabwe have endured enough. It’s time for a new era of peace and prosperity.

Emmerson Mnangagwa of Mugabe’s Zimbabwe African National Union -Popular Front (Zanu-PF) party was declared the winner by the curiously narrow margin of 50.8% — “just enough to scrape through the constitutional threshold of 50 percent plus one vote required to avoid a runoff,” according to the African News Agency (ANA). Mnangagwa defeated Nelson Chamisa of the Movement for Democratic Change (MDC), which called the result “fake.”

Flake had made no comment about the violence as of Friday morning. He also seemed less concerned than other international observers.

According to the Associated Press, “So far international observers have issued mixed reviews, calling Monday’s election peaceful and a break from the past but expressing grave concern about the military’s ‘excessive’ use of force. They criticized the [three-day] delay in releasing the results of the presidential vote, saying it raised concerns about possible manipulation.”

Flake seemed unconcerned about the Zimbabwean military, or whether the election was free and fair. At one point, observing a primitive hand count of votes by the light of kerosene lamps, he even tweeted: “Democracy doesn’t get any better than this.” 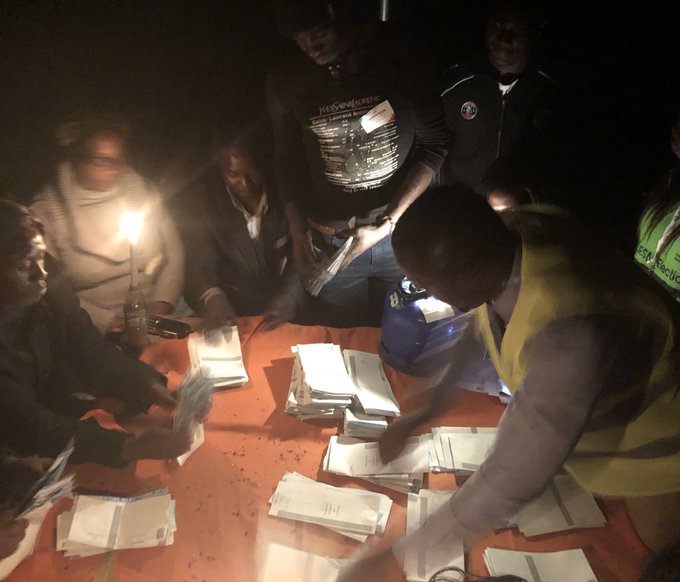 Counting ballots in a tent in rural Zimbabwe by kerosine and candlelight. Democracy doesn’t get any better than this.

He did meet with both Mnangagwa and Chamisa on Wednesday, praising the country’s “continued progress.” If the election results are accepted by the international community, Zimbabwe could see the lifting of economic sanctions that date to the Mugabe era.

Flake, a prominent figure in the “Never Trump” movement, has been one of President Donald Trump’s most vociferous critics, comparing the president to totalitarian dictators like Soviet tyrant Joseph Stalin. “How did we get swept up in this global resurgence of the authoritarian impulse, which now has democracies teetering on the brink, strongmen placing themselves above the law, and in our own country a leader who reveres some of the most loathsome enemies of democracy in our time?” Flake asked Harvard Law School graduates in May.

Last month, Flake slammed Trump for his meeting with Russian President Vladimir Putin in Helsinki, Finland, declaring that Trump had “failed to summon reality in the face of a despot.”