Pretoria – Zimbabwean President Robert Mugabe was a no-show at the closing ceremony of the 37th Ordinary Southern Africa Development Community (SADC) Summit held at the Department of International Relations and Cooperation (Dirco) in Pretoria.

Mugabe, who attended the opening ceremony on Saturday, was replaced by the country’s Foreign Affairs permanent secretary Ambassador Joey Bimha. Mugabe flew back home with his wife Grace after she was granted diplomatic immunity by the South African government. 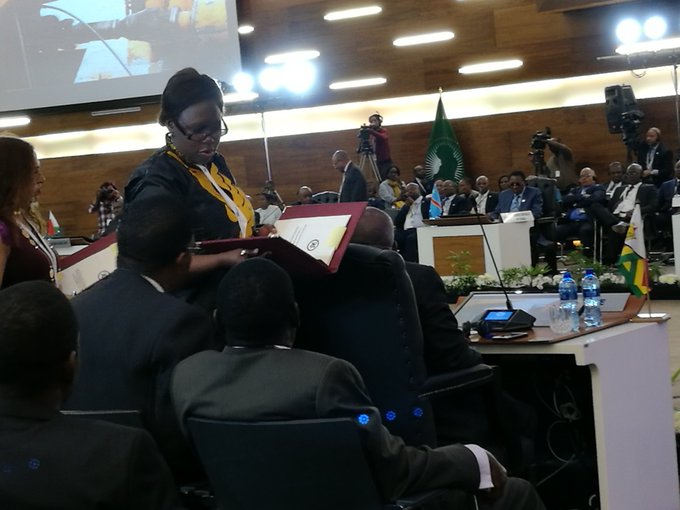 Zimbabwe’s first lady has been mired in controversy after she allegedly assaulted 20-year-old South African model Gabriella Engles at a luxury hotel in Johannesurg. The young woman had been in the company of the Mugabe sons, Robert Jr and Chatunga Bellarmine at the time of the alleged attack.

The 15 heads of state part of SADC also took time to sign protocols and agreements on various issues.

In a “minister’s minute” published in the Government Gazette on Sunday, International Relations and Co-operation Minister Maite Nkoane-Mashabane said that in accordance with the powers vested in her by the Diplomatic Immunities and Privileges Act, and “acting in the interests of South Africa”, she had “recognised the immunities and privileges” of Grace Mugabe.

Media reports earlier on Sunday stated Grace Mugabe had left South Africa in the early hours of Sunday morning along with her husband. Robert Mugabe was in South Africa to attend a Southern African Development Community (SADC) summit in Pretoria, but has reportedly left before the summit concludes on Sunday.

Grace Mugabe is accused of assaulting 20-year-old Gabriella Engels with an extension cord in a flat in Sandton, Johannesburg last Sunday, after which she applied for diplomatic immunity.

Democratic Alliance chief whip John Steenhuisen said in a statement on Sunday the DA would demand an immediate parliamentary inquiry into government’s complicity in allowing Grace Mugabe “to flee the country in the dead of night to avoid criminal prosecution”.

The inquiry should call on the ministers of police, international relations and co-operation, and defence and military veterans to account for their failures, he said.

“It is simply inexplicable how this has happened again. It illustrates how unrepentant the ANC government is and, following its complicity in allowing Sudanese president Omar al Bashir to escape an international arrest warrant, shows that the ANC government will continue to do exactly what it wants to protect their dodgy friends.”

“This government has no more legitimacy in the arena of international diplomacy and displays a total disregard for the rule of law. Indeed, the ANC has turned South Africa into a playground for the political elite and their criminal associates to act with impunity.”

The DA in parliament would never allow this state of affairs to continue and would demand a thorough inquiry into this latest and predictable failure by the executive. The ANC was content to “sell South Africa to the highest bidder, but they must be reminded that parliament is neither captured nor for sale”.

“The ANC can no longer be trusted to govern. South Africans have had enough. This is why the motion to usher in new elections should be supported. We cannot afford another two years of the ANC’s disastrous term,” Steenhuisen said.