The Council of Muslim Theologians, Jamiatul Ulama South Africa, has condemned the police’s “abusive tactics”, saying that the verbal abuse of the Prophet Mohammed, as well as police entering the prayer room with their boots on, were “distressing to Muslims”.

The Council was reacting to a video which circulated on social media at the weekend in which police are seen entering what appears to be a mosque, seemingly hurling abuse at congregants who are ordered to lie on the floor. 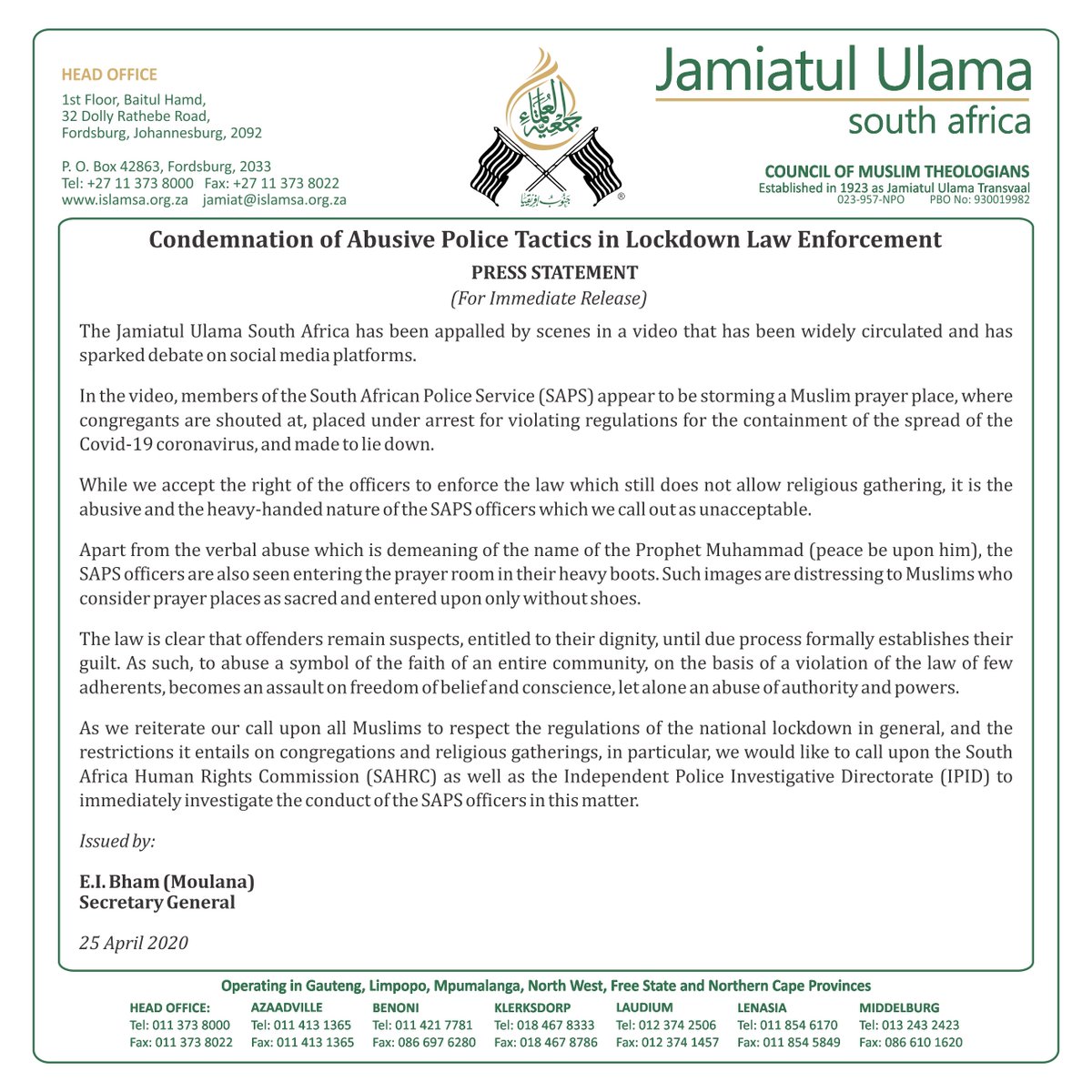 The Jamiatul Ulama South Africa has been appalled by scenes in a video that has been widely circulated and has sparked debate on social media platforms.

In the video, members of the South African Police Service (SAPS) appear to be storming a Muslim prayer place, where congregants are shouted at, placed under arrest for violating regulations for the containment of the spread of the Covid-19 coronavirus, and made to lie down.

While we accept the right of the officers to enforce the law which still does not allow religious gathering, it is the abusive and the heavy-handed nature of the SAPS officers which we call out as unacceptable.

Apart from the verbal abuse which is demeaning of the name of the Prophet Muhammad (peace be upon him), the SAPS officers are also seen entering the prayer room in their heavy boots. Such images are distressing to Muslims who consider prayer places as sacred and entered upon only without shoes.

The law is clear that offenders remain suspects, entitled to their dignity, until due process formally establishes their guilt. As such, to abuse a symbol of the faith of an entire community, on the basis of a violation of the law of few adherents, becomes an assault on freedom of belief and conscience, let alone an abuse of authority and powers.

As we reiterate our call upon all Muslims to respect the regulations of the national lockdown in general, and the restrictions it entails on congregations and religious gatherings, in particular, we would like to call upon the South Africa Human Rights Commission (SAHRC) as well as the Independent Police Investigative Directorate (IPID) to immediately investigate the conduct of the SAPS officers in this matter.