CAPE TOWN – The currently burning South African Parliament ground is home to the Lodge De Goede Hoop an old, white, plastered building that is a temple to one of the oldest secret societies in South Africa, the Freemasons.

According to legend, Freemasonry was introduced in South Africa in the 18th century and Freemasons sold the land on which Parliament stands to the Government for £1 on condition that should Parliament move, the land had to be sold back to the Freemasons for the same price.

The lodge at Parliament, known as De Goedehoop Temple, was built in 1772 when masonry was established in the Cape.

The South African opposition Economic Freedom Fighters have called for parliament to relocate to Gauteng for purpose of uniting the administration.

The building was inaugurated as the first Masonic temple in South Africa in 1803 and is still used daily by its members.

People say the Freemasons are on parliamentary grounds, but that’s not true. Actually, Parliament is on Freemasonry grounds.

Governments rise and fall, but one thing remains constant in the precincts of parliament in cape town: 235-year old Masonic lodge. Few know that an old and venerable temple of the ancient and mysterious brotherhood of Freemasons exists in the parliamentary complex. But De Goede Hoop Temple was built long before Parliament.

The Cape government of the time and the Freemasons were so intertwined that the Cape Parliament used the masonic banquet hall as a venue from 1854 to 1884 until the old House of Assembly was completed.

The organisation, regarded as among the most mysterious in the world, is all about money, power and secret handshakes, its detractors whisper. There are many conspiracy theories, alleged links with murders, and those who believe the Freemasons “planted the seeds” of apartheid.

Others say that from the organisation’s inception in the 14th century, it has been the secret hand that is quietly ruling the world.

Clip-on bowties don’t cut it for Reneuoe Kortjaas. He is old-school like that, he says as he expertly knots the slip of satin around his neck. He’s getting ready for his monthly boys’ night out, where the dress code is always penguin suit.

The dress code is stuffy and so are some of the rules of this get-together: no cellphones, no talking religion or politics (really), and no women allowed (really, truly). But Kortjaas, a music producer, is pumped. He adjusts the chunky ring on his finger and the compass-and-square insignia is the giveaway that tonight he’s meeting his Freemason brothers at their lodge (a clubhouse of sorts).

At 300 years old this year, Freemasonry has for some time seemed tired and antiquated, more relic than relevant. Its veils of mysticism and intrigue seemed shredded in a world of Google-knows-everything and attention spans that expire with a few scrolls through Twitter.

CHINKS IN THE VEIL OF SECRECY

Globally, Freemason membership numbers are down. The United Grand Lodge of England, the mother (or maybe father) body puts membership at 200,000 with around 7,000 lodges around the world. Reports also say in the last decade more than 100 lodges in the UK alone have closed.

Membership among those who’ve never owned a cassette tape or known a time when crisps didn’t come in cans are in the single digits.

It’s forced the Masons to use their tercentenary this year to push for greater transparency. It’s a tall order for a brotherhood that likes to call itself “a society with secrets” and thrives on closed networks. But it is a move that’s been essential to attract members, especially millennials like Kortjaas.

In South Africa, transparency meant open days at lodges welcoming visitors (even women) and responding to questions, criticism, wild speculation and even derision. The brothers have heard it all – from being labelled Satanists and bok-ryers, being part of the Broederbond, being anti-Semitic, classist, racist and full of bloated, ageing misogynists.

Kortjaas isn’t fazed. Neither is Dirk Norton, a Mason veteran who joined when he was 25 years old and has been a past district junior grand warden.

“I have been a Mason for 30 years and I’m still waiting for the sacrifice of a Vestal virgin,” he jokes.

Norton concedes there is room in Freemasonry to lighten up and to open up to stop fingers being pointed at them.

But he also says some ceremonies are necessarily serious and suited to being closed and formal. For all his millennial swagger, Kortjaas likes it too.

He finds the deliberately hidden layers of Freemasonry – revealed only with personal advancement – intriguing, tempting even. He first heard about Freemasonry as a 21-year-old and was instantly seduced. He googled the rituals and symbols – things like being blindfolded and bending a bare knee at an altar for initiation, secret handshakes, chequerboard carpets, tasselled aprons and gloves, all with symbolic relevance, and a hierarchy of advancement measured by degrees and titles like “worshipful master” and “33° Mason”.

Freemasonry rituals seem part bizarre, part Game of Thrones plot, but Kortjaas, who’s now a fourth-degree mason and a past lodge master, was hooked. He says: “I was intrigued and reached out to the President Lodge, which was my closest lodge when I was a student at the University of Johannesburg.”

President Lodge meets in the Freemason’s Hall in Parktown, Joburg. It’s also the District Grand Lodge of South Africa, a hub where dozens of other lodges hold meetings. The custom-built building on the eastern fringe of Parktown flanks untamed Hillbrow with masculine austerity. Its columns are imposing and stately and stretch up a double-storey façade.

It’s lovingly cared for. The foyer with recessed ceiling is filled with impressive memorabilia, photos and ephemera. A grand staircase leads to several meeting rooms, replicas of each other. They resemble theatre sets with overt masonry symbols, artefacts and careful orientation for everything.

The Parktown hall is a bubble from reality, but Kortjaas and his fellow young Mason Meshack Amisi, 26, who’s also tuxedoed up and waiting for the 7pm-sharp start on a Wednesday night, say they feel they fit right in.

Both have risen through the ranks of Freemasonry’s university scheme, an initiative started in 2005 in the UK to give under-25 students a platform to join with reduced membership fees and a gentler landing to the organisation. 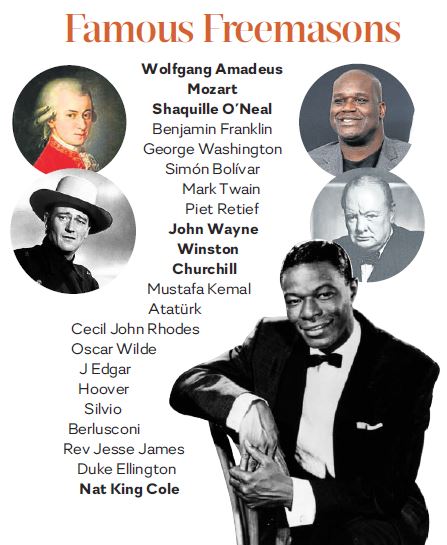 Beyond the tuxes, the bling and the fussy fuddy-duddy bits the real-life changes have been immense, the two say.

“I like the values of service to society and also that Freemasonry is about constant self-improvement, it’s why I keep coming back,” says Kortjaas.

Amisi, who grew up in the Democratic Republic of Congo, says he was attracted by the ideas of equality and that the journey of development through the Masonry degrees is personal yet propped up by fraternal support.

“I’m a Christian and some of my friends did think this was something funny for me to join, but Freemasonry is open to all religions, it’s honest, treats everyone with respect and there’s mentorship,” he says.

Both are also part of the Connaught Club, a social and charity arm for members under 35. It’s another necessary invention to appeal to younger members and in South Africa at least, it may be working. Norton says for the first time in years, membership numbers this year have shown growth.

Amisi and Kortjaas are new faces of an old organisation. They insist Freemasonry is relevant even in an era of #EverythingMustFall and in a time when the faintest whiff of colonial throwback stinks to high heaven.

“I see Freemasonry changing,” says Amisi. “It is becoming more racially inclusive and more progressive. Freemasonry is not for everyone, but any man can join and every man gets something different from joining.”

He dodges with a laugh a suggestion that Freemasons remain in the Dark Ages by sticking to a no-women membership code.

As the clock ticks closer to the start time Kortjaas and Amisi rush with due graciousness to wrap up the interview. It’s about keeping time, basic old-fashioned discipline and courtesy to their brothers.

Outside the lodge, a huddle of other millennial members are making their way in. Among them is Kortjaas’s younger brother, Kananelo. Kortjaas persuaded him to join when he was old enough at 21, two years ago.

The young men are late but they take last drags of cigarettes, push back sunglasses that are more fashion accessory than sun protection at 7pm and straighten bowties.

“Heita, howzit,” they greet, then strut with decided certainty through the dark double doors.

With that they slip from the reality of their Joburg-ordinary into a still-shrouded invisible world, which is now also perfectly their truth.

WHO WEARS THE APRON?

“The lambskin, or white leather apron, is the badge of a Mason, and is the first gift of Master to the Apprentice. The apron is worn by operators to preserve their garments from spot or stain; but we as speculative Masons use it for a more noble purpose. By the whiteness of the colour and the innocence of the animal from which it is obtained we are admonished to preserve that blameless purity of life and conduct, which will enable us to present ourselves before The Great Architect of the Universe, unstained by sin and unsullied by vice.”