Frank Lampard has been appointed as the new head coach at Chelsea on a three-year contract, sealing a return to Stamford Bridge for the club’s record goalscorer.

Derby granted Chelsea permission to speak to Lampard last week and the 41-year-old has now completed a move back to his former club as the permanent successor to Maurizio Sarri.

Chelsea are expected to pay Derby £4m in compensation for Lampard, who was excused from reporting for pre-season training with the Championship club on Monday.

After sealing his return to Stamford Bridge, Lampard told Chelsea’s website: “I am immensely proud to be returning to Chelsea as head coach.

“Everyone knows my love for this club and the history we have shared, however my sole focus is on the job in hand and preparing for the season ahead.

“I am here to work hard, bring further success to the club and I cannot wait to get started.”

Lampard, who scored 211 goals in 648 games as a player at Chelsea, will be joined at Stamford Bridge by his assistant Jody Morris and first-team coach Chris Jones.

After appointing Lampard, Chelsea director Marina Granovskaia told the club’s website: “It gives us great pleasure to welcome Frank back to Chelsea as head coach.

“Frank possesses fantastic knowledge and understanding of the club and last season he demonstrated he is one of the most talented young coaches in the game. 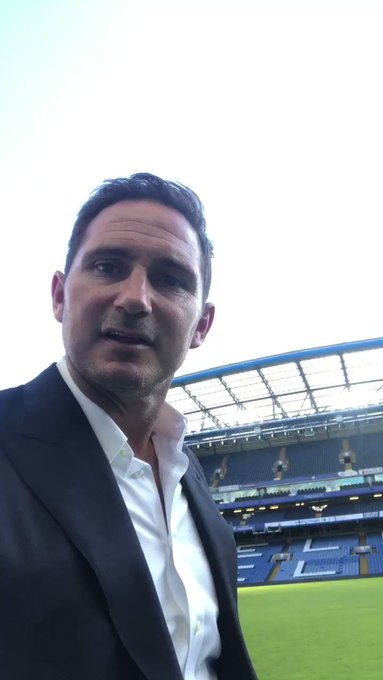 9,753 people are talking about this

“After 13 years with us as a player, where he became a club legend and our record goalscorer, we believe this is the perfect time for him to return and are delighted he has done so.

“We will do everything we can to ensure he has all the support required to be a huge success.”

Lampard returns to Chelsea after just one season in management, during which he led Derby to the Championship play-off final.

Derby chairman Mel Morris – who is expected to appoint Phillip Cocu as Lampard’s successor – told the Rams’ website: “Frank, along with Jody and Chris, leave with our best wishes and I sincerely hope they have success at Chelsea.

“I thoroughly enjoyed working with Frank and while we would have loved his time at Derby to continue, to build on the positives we saw last season, the opportunity for him to return to Chelsea as their head coach was huge.

“As a club, we have enjoyed an excellent working relationship with Chelsea recently and would like that to continue moving forward.”

Lampard also reflected on his year at Derby, telling their website: “I would like to say a special thank you to Mel Morris, the players, staff and everyone who is associated with Derby.

“It has been a fantastic experience for me, and I feel privileged to have managed such a prestigious club.

“Most of all, I want to thank the fans who supported me and the team from the day I arrived in the city. I wish everyone the best of luck going forward.”