Jack Charlton, an uncompromising central defender who won the 1966 World Cup with England alongside his brother, Bobby, before coaching Ireland to its first major tournaments, has died. He was 85.

Nicknamed “Big Jack,” and celebrated for his earthy “beer and cigarettes” image, Charlton was Footballer of the Year in England in 1967. He spent all his club career at Leeds from 1952-73, tying its all-time record of 773 appearances. He won every domestic honor, including the league title in 1969. 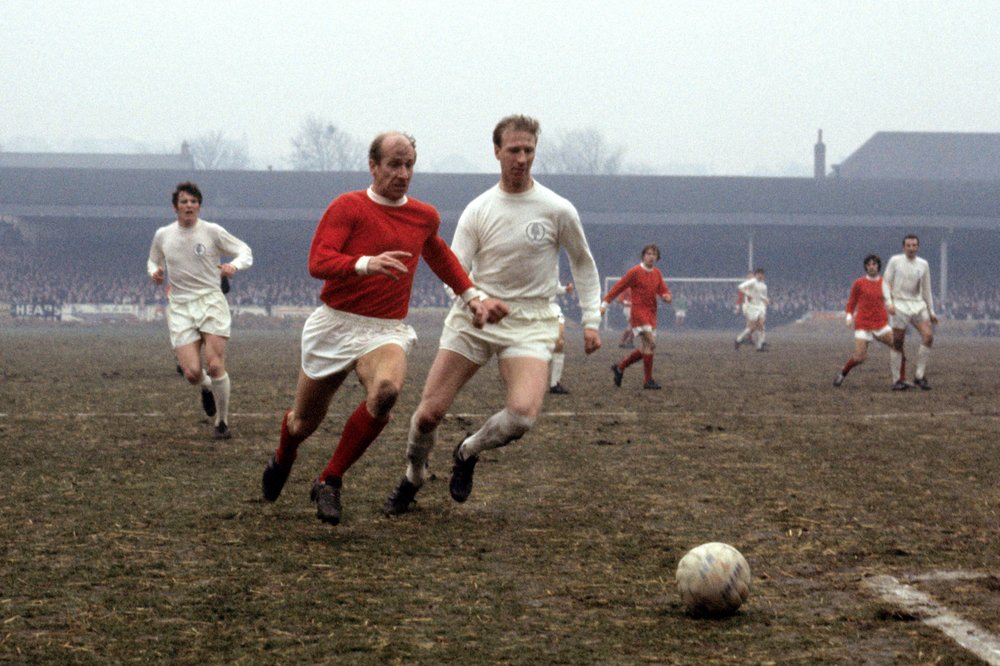 Charlton died at home on Friday in his native Northumberland in northeast England, surrounded by his family.

“As well as a friend to many, he was a much-adored husband, father, grandfather and great-grandfather,” the family said in a statement on Saturday. “We cannot express how proud we are of the extraordinary life he led and the pleasure he brought to so many people in different countries and from all walks of life.

“He was a thoroughly honest, kind, funny and genuine man who always had time for people. His loss will leave a huge hole in all our lives but we are thankful for a lifetime of happy memories.” 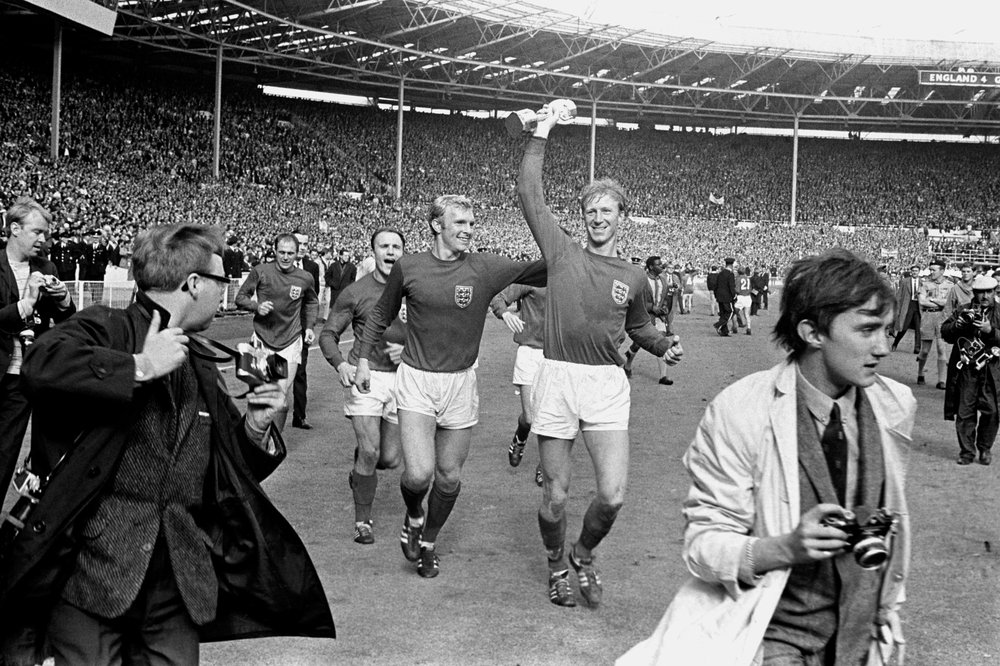 Jack Charlton, right, holds the Jules Rimet trophy aloft as he parades it around Wembley with teammate Bobby Moore following their 4-2 win over West Germany

Premier League games will be preceded by a minute’s silence this weekend as a tribute to Charlton and players will wear black armbands.

British Prime Minister Boris Johnson remembered Charlton as a “football great whose achievements brought happiness to so many.”

The England team Twitter account said “we are devastated.” Charlton was one of the players who helped to deliver England’s first and only major international title, featuring at the heart of defense alongside captain Bobby Moore as Germany was beaten 4-2 after extra time in the 1966 World Cup final.

“Jack was the type of player and person that you need in a team to win a World Cup,” said Geoff Hurst, who scored a hat trick in the final. “He was a great and lovable character.”

Charlton had younger brother, midfielder Bobby, on the field at Wembley Stadium to celebrate with him. They embraced in tears at the final whistle.

“Nobody can ever take this moment away from us,” Bobby Charlton was quoted as telling Jack.

Jack celebrated the victory by partying in a random person’s house in north London, ending up sleeping on the floor. That was typical of the man who kept the common touch despite his fame and remained an affable character, fond of life’s simple pleasures.

“I got a lift back the following morning and my mother was playing hell as I hadn’t been to bed all night,” Charlton recalled. “I said, ‘Mother, we’ve just won the World Cup!’” 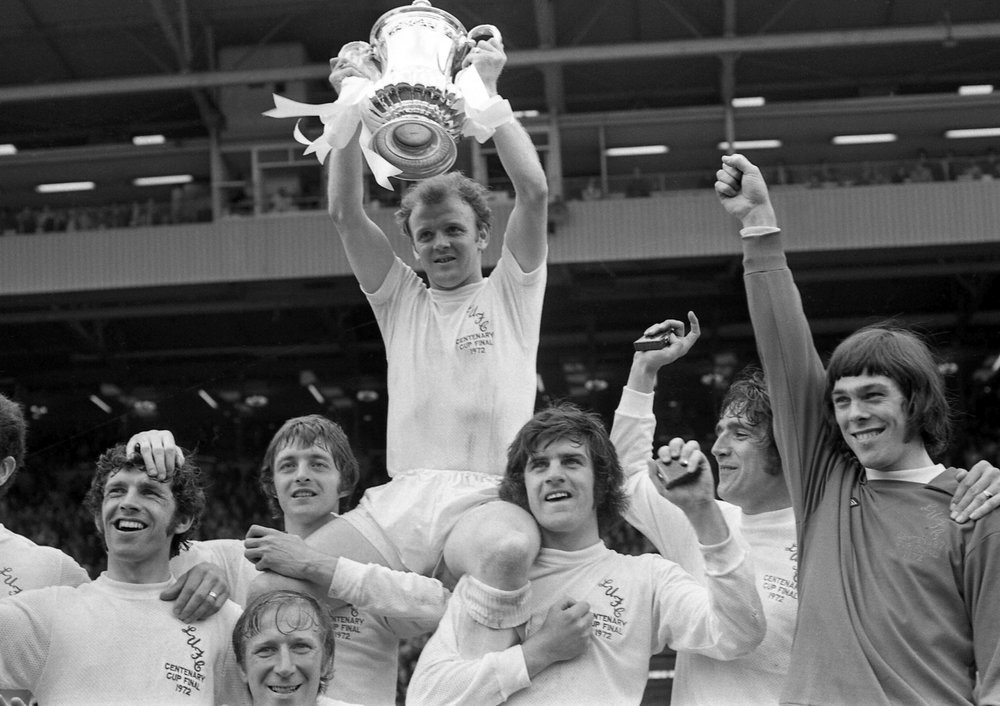 In this file photo dated May 6, 1972, Leeds United captain Billy Bremner, seated on the shoulders of his teammates, shows the FA Cup to the Leeds fans after their 1-0 victory over Arsenal at Wembley, with from left to right, Johnny Giles, Jack Charlton, Allan Clarke who scored the winning goal, Peter Lorimer, Norman Hunter and goalkeeper David Harvey.

Charlton made 35 appearances for England between 1965-70, also playing in the 1968 European Championship and the 1970 World Cup. A very different player to Bobby, who was once all-time top scorer for both England and Manchester United, Jack was in the shadow of his brother during his playing career.

It was obvious from an early age that Bobby “was going to play for England and would be a great player,” Jack recalled in a 1997 BBC interview. “He was strong, left- and right-footed, good balance, good skills. He had everything, our kid. I was over 6 foot (1.8 meters). Leggy. A giraffe, as I finished up being called.”

There were tensions in the relationship between the siblings over Bobby’s wife, Norma. But there was a public reconciliation in 2008 when Bobby received a lifetime achievement award at a BBC sports ceremony and Jack told the audience: “Bobby Charlton is the greatest player I’ve ever seen and he’s my brother.”

Of all the England World Cup winners to go into management, Jack Charlton was the most successful. He had brief but impressive spells at northeast clubs Middlesbrough, Sheffield Wednesday and Newcastle before being hired by Ireland in 1986 as its first foreign coach.

Adopting a direct, physical and attack-minded style, Charlton got the best out of Ireland’s hard-working players and ensured they qualified for the World Cup for the first time in 1990 and again in 1994.

“He was an Englishman becoming the Irish national team manager at a time when it wasn’t always easy politically,” said Andy Townsend, Ireland’s captain at the 1994 World Cup in the United States. “But as Jack always did he breezed into it and took it by the scruff of the neck.”

In 1990, the Irish shocked Romania to reach the World Cup quarterfinals where they lost to host Italy.

“He brought us … to places we never thought possible,” former Ireland striker Niall Quinn said. “He changed lives. For his players, he gave us the best days of our lives.”

Ireland also played at Euro 1988 and the 1994 World Cup under Charlton.

“You get the ball forward, you compete, you close people down, you create excitement, you win balls when you shouldn’t win balls, commit yourself to the game,” Charlton said of Ireland’s style. “A lot of the pundits didn’t like it but the teams we played against hated it.”

Charlton said his best memory as Ireland coach was beating Brazil 1-0 in a friendly at Lansdowne Road in 1987. He resigned in 1995 after losing in a Euro 1996 playoff to the Netherlands.

“It was not just the success on the field of play,“Ireland president Michael D. Higgins said. “Jack’s endearing popularity also had much to do with the warmth and personality of the person who quickly became such a legendary sporting icon.”

He was awarded honorary Irish citizenship in 1996. A life-size statue of him was erected at Cork Airport, depicting him wearing fishing gear and holding a salmon — recalling Charlton’s favorite pastime of fishing.

“I am as much Irish as I am English,” said Charlton, who was given the freedom of Dublin.

Born May 8, 1935, in a gritty area of northern England, Charlton worked down the mines as a teenager before going for a trial at Leeds. He grew up in a footballing family, cousin to Newcastle great Jackie Milburn while his uncles Jack, George, Jimmy and Stan all played professionally.

“It left me no choice but to be a footballer,” Charlton said.