MASVINGO – A leopard never changes its spots so goes the African saying.
John Chirongoma who left Masvingo Magistrates Court with tail under his legs after a man caught him wedding his wife last year was at it again on Friday when he returned and this time successfully wedded the same woman Crescencia Mudzviti.
However, just like last year the event did not go without incident. Chirongoma’s wife was the one to spoil the party. She arrived a moment late as she found the vows, signatures and union already sealed.
This did not however stop the unexpected mid-morning drama as the sheer arrival of Chirongoma’s wife only identified as Mai Mary sent the blissful couple that was pausing for the flash outside the court buildings in sixes and sevens. 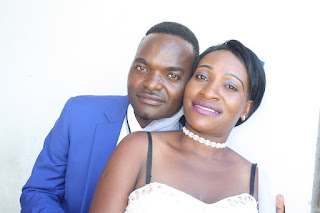 Chirongoma who stays in Nyadzonya Street in Aphiri, Mucheke was the first to spot his fuming wife disembarking from a taxi and all hell broke loose. He dropped his newly wedded wife’s hand and headed for the court gate with a fast step at first but with adrenalin running loose in his blood the pace quickened and no sooner was he going for Usain Bolt’s 100 metre World record.
Who knows!
He passed the gate turned right and sprinted along Jason Moyo Road in the direction of Masvingo General Hospital Road with his wife Mai Mary in hot pursuit. She was naturally no match for the hubby who outpaced her as if she was not in motion.
Picking one or two stones and throwing them in a bid to cover the lost ground did not help as the Chiringoma was soon out of sight of the jeering crowd.
Mudzviti was more tactiful, she sneaked into a relative’s car and was off.
The two tried to wed last year but the wedding at the same court was disrupted by Mashomare Muzenda who said that he was Mudzviti’s hubby. Chiringoma once again  ran for dear life. – Masvingo Mirror