London – British boxers Amir Khan and Anthony Joshua became embroiled in an explosive Twitter spat on Friday after Khan appeared to accuse Joshua of having a relationship with his wife.

Khan, who is currently on holiday in Dubai, said he was splitting up with his American wife, Faryal Makhdoom Khan, and suggested she had got together with Joshua.

Joshua, the reigning world heavyweight champion, and Makhdoom both responded by denying the accusations, with Makhdoom accusing Khan of being unfaithful.

“Faryal moved on quick,” Khan wrote on Twitter. “Always mentioned to me how much she wanted to be with another guy, from all people another boxer @anthonyfjoshua.”

In subsequent tweets, former light-welterweight champion Khan added: “Left my family and friends for this Faryal. I’m not hurt but another fighter. I’m making it public. You getting the divorce #Golddigger.

Makhdoom, a model, hit back: “Accusing other boxers just because your boxing career is finished. Man up amir. 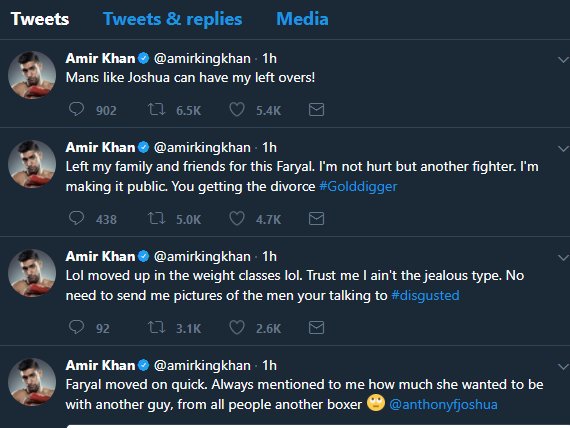 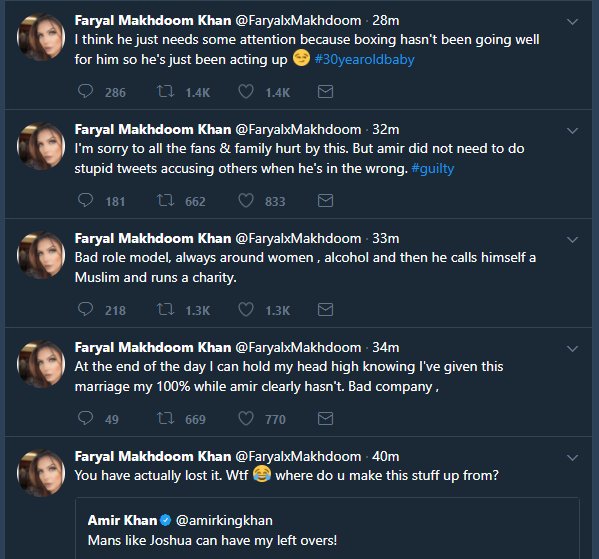 Stop It please For Your Baby…#amirkhan #Faryal

“After all these years. I’ve always defending (sic) a cheat, always stuck around for him, always had his back. And I’m called a gold digger?”

Joshua responded by posting a clip of the song ‘It Wasn’t Me’ by Shaggy, in which the protagonist tries to dodge accusations of infidelity.

Khan and his wife have a history of airing their dirty linen in public.

Last year Makhdoom, 26, took to another social media forum, Snapchat, to blast Khan’s family, accusing them of abusing and bullying her.
Khan, 30, responded by telling his wife and family to try harder to get along.

But he and Makhdoom also appeared on British daytime television in January to discuss rumours about his infidelity and a sex tape he appeared in.
AFP