The Zimbabwe Republic Police has dismissed reports that the MDC Alliance members who include Johanna Mamombe, Obey Sithole, Ostallous Siziba, Stanley Manyenga, and Justin Chidziva who were involved in an illegal flash demonstration on Wednesday in Warren Park, Harare are in police custody.

In a statement issued on Thursday, police said their lawyer has been in contact with Officer Commanding Police, Harare Province and was told to bring his clients for an interview with regards to the above cited matter.

1. The police spokesman told the @DailyNewsZim that the missing MDC Alliance politicians were arrested. @PoliceZimbabwe now tweets that they are not in police custody. There appears to be a contradiction but on closer examination, it can be reconciled. 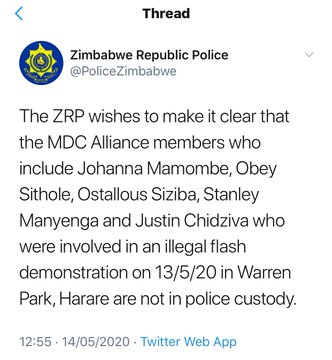 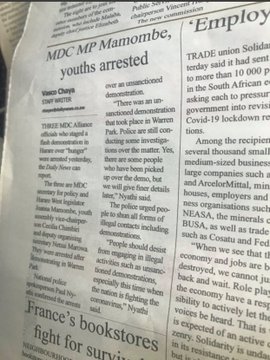 Earlier reports had indicated that Mamombe was arrested together with Cecilia Chimbiri and Netsai Marova at a roadblock near the National Sports Stadium in Harare.

The demonstration, the first by the main opposition party since the government declared a national lockdown against the spread of Covid-19, was held in Warren Park, a suburb that is some five kilometres west of the city centre.

Enforced disappearance is a crime against humanity. It’s the act of making someone disappear against his or her will, often suddenly. It refers to the arrest, detention or abduction of a person, followed by a refusal to acknowledge the fate of that person.Release the MDC 3.

Posting on Twitter Human Rights activist Siphosami Malunga said, “The Zimbabwean regime must understand that it can’t continue to do these things with impunity. This is an ICC issue! In 1983, my father was arrested and enforcedly disappeared. His lawyer, David Coltart, searched all the country’s prisons and eventually found him in Gwanda,125km away.”