HARARE — Members of Zimbabwe’s opposition — mainly youths — sang, “We are tired of living on our knees, begging” as they marched Friday in Harare.

Promise Mkwananzi, the youth leader of Zimbabwe’s opposition MDC party, said that was a message to President Robert Mugabe’s government. He said Zimbabweans want the government to alleviate cash shortages that are strangling the economy.

However, the protest was broken up by police and youths wearing ZANU-PF regalia, who were brought to the scene by vehicles adorned with the ZANU-PF logo. 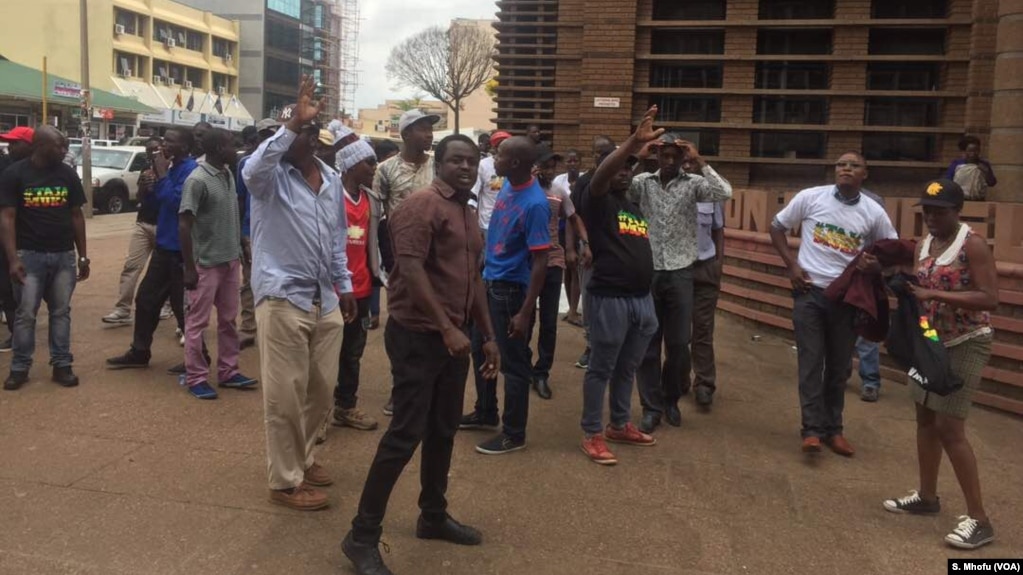 “We were on our way to the Reserve Bank of Zimbabwe,” he said. “The regime responded with heavy handedness on peaceful and law-abiding citizens. They have temporarily set us back.”

He said the MDC would gather and demonstrate until Zimbabwe’s economy has improved.

The southern African nation is going through its worst economic slump since the hyperinflation of 2008 led Zimbabwe to abandon its own dollar the following year.

An acute shortage of American dollars and South African rand has prompted shops to hike the price of most commodities. Businesses say the cost of importing goods has gone up as they try to source foreign currency on the black market. Bond notes, a surrogate currency introduced last year, officially trades on par with the U.S. dollar. Lately, however, it is trading at 50 percent of its official value.

Economist Prosper Chitambara says the bond notes are partly to blame for the current economic problems.

“Bond notes were never the solution, and they have actually even eroded the confidence of the market,” he said.

“So those parallel markets have actually fed into the inflationary spiral, and that has also further eroded confidence on the market and also the confidence of consumers.”

Last week, many Zimbabweans stocked up on food following price hikes, fearing the return of hyperinflation.

That prompted prominent pastor Evan Mawarire to call for demonstrations against the deteriorating economy.

Mawarire was quickly arrested and accused of subversion, but the charge was later dismissed in court.